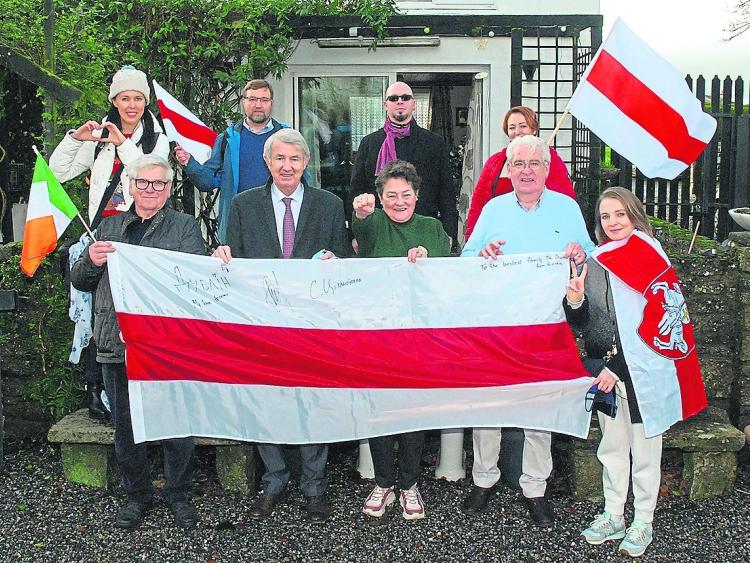 Sviatlana Tsikhanouskaya, the world famous exiled leader of the Belarusian opposition party who are challenging the regime of Alexander Lukashenko, made a video call from a secret location to friends and family in Roscrea last week.

Roscrea was chosen for this event as Sviatlana Tsikhanouskaya spent many summers in the town with the well-known Deane family as part of the Chernobyl Lifeline Project.

Prior to running for Presidential election, Sviatlana, a 37 year old former teacher, was a stay at home mother with no previous political involvement.

She took the incredibly brave decision to run in the Presidential Election in Belarus when her husband, Sergey, a popular blogger, was imprisoned after he had entered the election campaign.

In a very moving video call, Sviatlana expressed her thanks to Ireland for its support for democratic principles and human rights in Belarus. The flag of the Democratic opposition was presented to the Deanes’, with a signed message to the people of Ireland which read “To Ireland, which I love forever. To the best family, the Deane's of Roscrea”.

The white, red, white flag is the symbol of the pro-democracy opposition, possession of which has resulted in prison sentences in Belarus.

Sviatlana, known as “Sveta” by her Irish family, has very fond memories of her time in Roscrea and during the call Svetlana spoke about her favourite place in Ireland, Knockshegowna Hill near Roscrea, where the family often went for picnics - something she particularly enjoyed.

During the call to her family and friends in Roscrea she also spoke to Tipperary Dáil representative, Michael Lowry, who pledged the support of the Irish people and invited her to address the Irish Parliament when she someday returns to Ireland after what he described as her “triumph for democracy.”

She said Ireland is the first place she hopes to visit when she becomes President and joked she hopes she will not “have to choose between Parliament and Knockshegowna” before signing off from the call by saying “Ireland I love you”.

Henry Deane, who was the Chairman of Chernobyl Lifeline in Roscrea for many years, and his wife Marian personally invited Deputy Lowry to the event in recognition of the help he had given them during the early years of the Chernobyl Lifeline Project.

“He was the only one who was willing to help and several times we had great difficulties getting the children into the country at all, but he always helped us to make it happen. His help made the difference in the lives of so many children in desperate situations,” Marian Deane told the Tipperary Star.

“Its inspiring to see the affection Sviatlana has for Henry and Marian and the dedication they have to the cause of Belarus”, Deputy Lowry told this newspaper.

“When you read into the story behind this remarkable woman and her country it brings home the importance of democracy and why we must protect it”, Deputy Lowry said.

During the call Ms. Tsikhanouskaya said her party appreciate Ireland’s support for the EU statements on the political and civil rights crisis in Belarus. “Your support for sanctions against Lukashenko's regime is also important for us. We are grateful to Ireland for its concrete support and financial help for civil society in Belarus”, she said.

She also expressed her appreciation of the commitment by Thomas Byrne, Minister for European Affairs, who during a video conference earlier this month pledged that Ireland will use its voice on the United Nations Security Council to keep the situation in Belarus high on the International agenda.

An Taoiseach, Micheál Martin, was one of the first Heads of Government to condemn the rigged elections and subsequent repression in Belarus.

Both Simon Coveney, Minister for Foreign Affairs, and Thomas Byrne, Minister of State for European Affairs, have condemned the human rights violations and have been strong advocates of sanctions at EU meetings.

Henry Deane, who was very moved by the call with Sviatlana, accepted the “signed revolutionary flag” sent from Ms Tikhanovskaya.

“I’m very proud to receive the flag, as Sveta was always a very important part of our family, and she always will be, it is very much a woman’s revolution in Belarus.

“The Belarusian people are very brave, and very peaceful, I can’t understand how they are so peaceful, because frustration alone would drive people to become violent, but they are very quiet people,” he said.