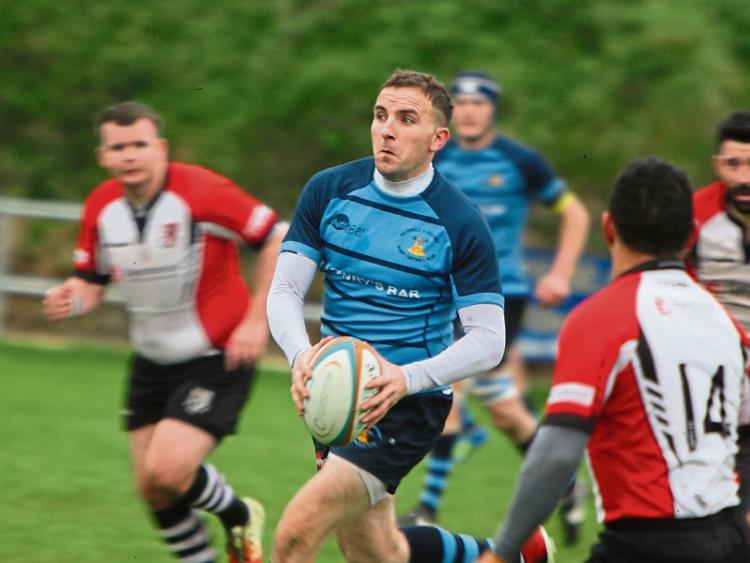 On Sunday last  Kilfeacle and District RFC welcomed St. Senan’s RFC to Morrissey Park for their meeting in the Munster Division 1 League encounter and the  home side started against the light breeze  and had the better of the earlier exchanges.

The first score  arrived when Gavin Heuston broke  the St Senans defensive line with a chip through which enabled Kevin Doyle to sprint 20 metres before touching down for a try which William Staunton duly converted from a very tight angle.

It only took another four minutes before the next score materialised and it came in the shape of a fantastic individual score from John Bourke who danced his way through the St Senans’ defence to touch down in the corner.

Kilfeacle’s pack were now completely on top and this dominance was rewarded when Jack McLoughlin finished in the corner.

The score line now read 17 points to 0 in favour of Kilfeacle and District.

With four minutes left in the half St Senan’s earned a long distance penalty which was kicked to touch to bring the visitors into an attacking position just five metres from Kilfeacle’s tryline. Eight phases of play later St Senan’s pushed over under the posts to score a converted try.

This score had the effect of spurring Kilfeacle back into attack mode and the following series of play lasting two minutes ended up with Brian McLoughlin picking up from the base of the scrum playing a true captain’s role. Hugging the touchline, he charged over the opposition’s line to score his team’s fourth try and securing the bonus point before half-time.

At half-time the score of 22 points to 7 in favour of Kilfeacle.

As the second half progressed Kilfeacle and District started to come into the game more and began to look menacing with some sustained possession and good phases of play. Not to be out done the backs started to move the ball.  Kilfeacle had gained the upper hand and some of the younger players, particularly Brian Barlow, Killian Noonan and Kevin Doyle, were starting to win their duels with their counterparts.

Kilfeacle were having the better of the early exchanges and in the 18th minute John Bourke went on another fantastic solo run which saw him cross St Senan’s try line. William Staunton  converted and Kilfeacle and District had increased their score to 29 points.

St Senans didn’t get where they are today by giving up when going further behind and within 12 minutes of conceding scored their own very impressive try in the corner which they were unable to convert.

With next week’s home tie against Wicklow in the All-Ireland in mind, Kilfeacle emptied the bench. This added further impetus to Kilfeacle as some of these players were trying to lay a claim for a starting berth in next week’s game. These subs played a huge part in Kilfeacle’s next and last try. Brian McLoughlin once again finished off a fine move with a huge input from Ricki Whitney and Kevin Kinnane, to leave the final score reading 34 points to 12 in favour of the home side.

Kilfeacle were happy with the performance and the result, in a lively game.

After the game team manager Ted O’Conor said, “We are happy with the effort and application shown by the squad. All the players, including the young players and those returning from injury, impressed. I would like to take this opportunity to thank St Senan’s for a hard fought but sporting match and wish the club the very best in the future. I thought that the team played well as a unit but there is still room for improvement, so a full attendance at training is vital if we are to win our next match which is a home tie All-Ireland Cup Quarter Final match against Kilkenny RFC.”