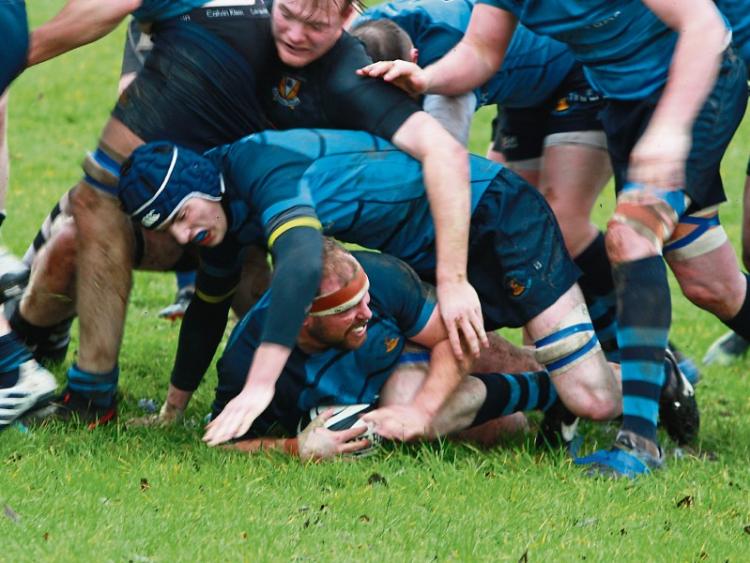 Kilfeacle have now opened up a four point lead in Division 1 of the Munster Junior League approaching the halfway mark following their 22-21 away win at Newcastle West.

Although our form of late has been impressive everyone knew that if we were to take something from this game we would have to perform to the best of our ability as a team. On Sunday last the weather was bitterly cold but  we  had the advantage of a light breeze for the first half. Newcastle started the game well and immediately pushed Kilfeacle back into their own 22. Directly from the kick-off they were awarded a penalty, which Sean Herlihy kicked to settle any nerves and get his team off to an impressive start.

Newcastle West didn’t rest on their laurels and were pressurising Kilfeacle on every possession.

With 12 minutes on the clock Eoin O’Halloran touched down the ball to secure Newcastle West’s first try of the game. Sean Herlihy put in a massive kick for the conversion  to earn his side two more valuable points. This score put Newcastle West 10-0 ahead and the home supporters into full voice.

The visiting fans, of whom there was a large amount, started to fear the worst and needed something positive to latch onto. The restart by Kilfeacle was contested, very successfully, and in the process Newcastle West knocked on the ball which signalled the first scrum of the game. This was to prove to be a pivotal moment as it showed Kilfeacle that they were the dominant force in this aspect of the game.

In the 24th minute Kilfeacle,  after some sterling work by all the team, were awarded a five metre scrum. After five minutes, four scrums and repeated infringements by the home team the referee has no choice but to award Kilfeacle and District a penalty try. This brought the score to 10-7 and the travelling fans  now had something to believe in.

Kilfeacle were now in the ascendency and knew that in the lineout and scrum they had two options in which they were superior.

Four minutes later a rolling maul by Kilfeacle saw the pack touch down for what the believed was their second try but the referee deemed it to be held up.

The celebrations were muted but only for a couple of minutes. After another seven phases of play and in very similar circumstances, James Ryan touched down in the corner to bring the score line to 13-12.

The rest of the half was played in the middle third and when the referee blew his whistle it seemed that everyone, players, coaches, officials and supporters were in need of the respite.  The consensus from the very vocal travelling supporters was that their team was now playing the better of the two. However, the half-time scoreboard was showing 13-12 in favour of Newcastle West. Trailing by one point, having spent most of the latter portion of the half attacking, meant that Kilfeacle were in the ascendency but still behind.

At half-time William Staunton let his team know the gravity of the situation in no uncertain terms and Brian McLoughlin urged his team mates to continue  as they had been doing and that their patience and discipline would be rewarded. From the restart, Kilfeacle immediately took the game to Newcastle West and gained territorial advantage. Within 10 minutes Kilfeacle and District finally took the lead with a converted try from Jack McLoughlin that William Staunton added two points to. The scoreboard now read 19-18 in favour of The Boys in Blue.

Newcastle West needed to increase their intensity and this they did and in the 58th minute scored their second try. This came from some quick thinking after a penalty was awarded to Newcastle West on the halfway line. Kilfeacle momentarily switched off. One quick tap, six passes through the backs and Brian O’Sullivan went over in the corner to score for Newcastle West.

The lead had been cut back to the minimum, 19-18, with 21 minutes left on the clock. Now everyone was nervous. Game on!

Kilfeacle never veered from their game plan and started to work their way back into Newcastle West’s 22. In the 70th minute they were awarded a penalty which William Staunton converted to gain a little breathing space -  22-18 to Kilfeacle. However with four minutes left on the clock Sean Herlihy kicked a monstrous penalty for Newcastle West and we were back to a one- point game.

Nobody was going home early from this pulsating game. With two minutes of injury time played Kilfeacle were awarded a penalty and elected to kick for the corner in an attempt to score a fourth try and earn a bonus point. This brave attempt fell short and from the resulting attack Newcastle West turned over possession to mount one last-ditch attempt to win the game. A knock-on in their own 22 saw Kilfeacle win the ball and kick to touch, ending this titanic struggle. The final scoreline of 22-21 in favour of the visiting side reflected how tight a game and absorbing a contest this was.

After the game William Staunton said “we are delighted with the win and the manner in which it was achieved. We needed this win but it does not mean we can rest on our laurels. It was great to see a fine display by a young and exciting squad. I would like to take this opportunity to thank Newcastle West for a hard- fought but sporting match.”

The team as ever are proud and humbled by the amount of support they receive and hope that their supporters will continue to come along and support the team for their remaining fixtures.

CROSSHAVEN NEXT UP FOR KILFEACLE

Next week’s game is another mouth-watering league encounter against Crosshaven in Morrissey Park on The Hill on Saturday, November 30 at 5.30pm.