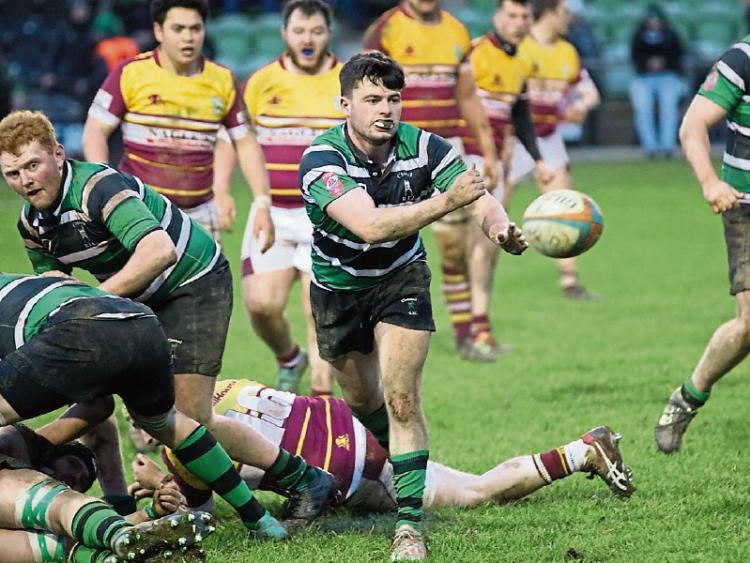 Acting scrum-half Dylan Cadogan gets his backline moving against Bruff in the AIL Division 2C clash at Ard Gaoithe on Saturday last.

In swirling winds in Ard Gaoithe, Clonmel lined up against Bruff on game day eight in the AIL. After an emphatic second half the previous week, they were hoping to continue building on current form.

Bruff showed their intentions, with the forwards carrying hard and putting Clonmel under pressure from the off, which was absorbed with brave defence  that was seen again later.

Once Clonmel got the ball back, they started causing Bruff issues out wide, ultimately leading to a try for Greg Carroll, which was converted by Darren Cass. Some more great play allowed Clonmel to capitalise on their upper hand, culminating in a Dylan Cadogan penalty.

Bruff answered strongly and came at Clonmel like a hurricane with phase after phase, which was eventually rewarded by a line break and scoring to make it 10-7 at half- time.

The second half kicked off, and the wind picked up. A fire had been lit under Bruff at half-time and they weren’t going to leave Clonmel boss them around. They laid siege upon the Clonmel line until the ball was turned over. Once again, the backs received the ball and made serious ground up the field with fast hands and silky footwork. The forwards were not going to let the backs have all the limelight and went at Bruff phase after phase, with big hits coming from both teams. With a final surge the forwards drove over the line, and emerging from the pile of bodies was David O’Gorman with a big smile and ball in hand after scoring his second try.

Bruff worked hard and earned themselves a penalty, which was converted. Clonmel retaliated, but Bruff’s defence stood firm. They worked their way up the pitch into a dangerous position. However they couldn’t make it seven, so they satisfied themselves with a drop kick to make it 15-13.

Clonmel then made a rip-roaring linebreak and all Bruff could do to stop it was to give away a penalty. The swirling wind made this a challenging kick, and the ball came back off the posts straight into Clonmel hands. Clonmel played phase after phase, working it around the corner. However, the ball was lost and Clonmel capitalised on an earlier penalty advantage, which Darren Cass slotted over.

With 12 minutes to go, Bruff threw their full armoury at Clonmel, and for over 30 phases were camped in Clonmel’s 22. Their forwards crashed up ball from one side of the pitch to the other, relentlessly hammering at a green impenetrable wall - Clonmel  were not going to let Bruff in. Eventually Clonmel made an amazing turnover and the final whistle followed.

To a man every Clonmel player was sore  the following morning, but the pride in the jersey and putting another win under their belts  eased the pain. This win put Clonmel up to fourth in the table, but there is no time to rest as they head away to Skerries this weekend.