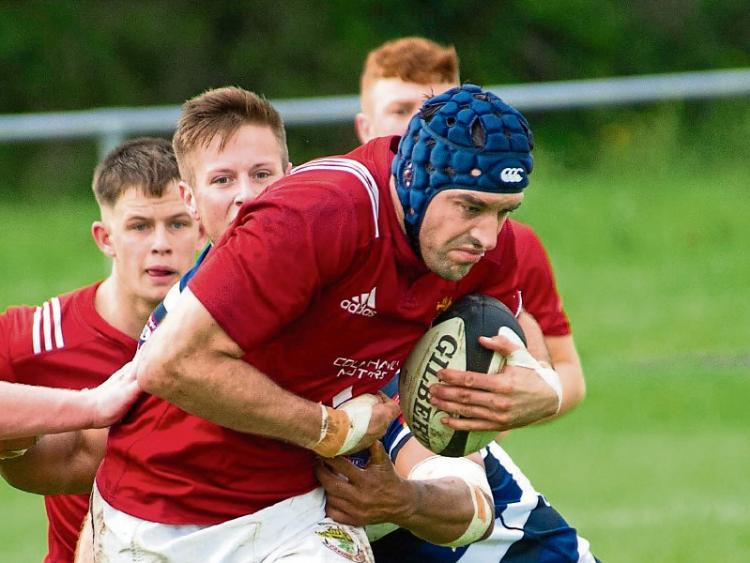 History was created in Dubarry Park, Athlone on Saturday as the local team, Buccaneers, played host to Cashel in the All-Ireland League.

It was the first time the clubs met in competitive rugby and there was an element of the unknown about the fixture.

When the dust had settled at the end of the game it was clear that Cashel had been somewhat ambushed by the hosts,  who were in a position to field five Connacht academy players on their team. This proved crucial, as there is no doubt that being a professional player playing an amateur gives you a certain advantage and there was definitely an advantage in the front row.

It was this area Buccaneers exploited and the number of penalties conceded by Cashel as a result decided the game in the end.

To Cashel’s credit they competed like true heroes and came away with a losing bonus point and could have sneaked a win. However on the run of play the locals deserved their victory.

Cashel played against a very strong wind in the first half. Buccaneers were awarded their first penalty in the fourth minute but missed the opportunity to go ahead.

Three minutes later they kicked a penalty to the corner but heroic defending by Cashel kept them out. Cashel were dominating possession but were finding it difficult to get field position because of the wind. A promising move on half way was pulled up for crossing and Buccaneers were back on the attack again.

The rucking of the Cashel team in the first half was of a high quality, as they drove time after time into the local team’s  half. Brendan Crosse, James Ryan and Richard Moran were particularly prominent at this time and Paudie Leamy was prominant in defence.

At scrum half Aidan McDonald, deputising for the injured Josh Pickering, had a wonderful game.

The Buccaneers lineout was also very effective and they disrupted the Cashel throw on a number of occasions and then used the wind with huge kicks to gain field position. Late in the first half Cashel were put under severe pressure in the scrum around the midfield area. On the stroke of half-time Buccaneers secured three points with a monster penalty from the halfway line, which illustrated the strength of the wind.

There was still some injury time left and when Buccaneers won another scrum on halfway the referee lost patience, yellow-carded a Cashel player and awarded the home team another penalty, which drifted narrowly wide.

The half-time whistle was sounded and Cashel to their great credit had played some magnificent rugby and were down 3-0.

After the heroics of the first half and the wind at their backs in the second half Cashel were expected to take control. It is well known that the wind will not win a game.

It was Buccaneers’ turn to defend against the wind and they took over and replicated the effort of Cashel in the first half. Defensively both teams were solid. The conditions were tough and handling difficult and it was going to take something special to break the deadlock.

It was always possible Cashel would get a penalty opportunity to get back in the game. The game changer came on 64 minutes. After a period of sustained Buccaneers pressure their out-half Luke Carty, brother of Jack, put a little chip in behind the Cashel centres. In the race for the ball it was knocked over the Cashel line and touched down by a Buccaneers player for a priceless try. The conversion was missed.

At 8-0 Cashel needed and indeed deserved to take something from the game.

Ed Leamy made ground down the left-hand side but the attack was broken up.

On 73 minutes Cashel pressure paid off and they were awarded a penalty forty metres out. Eamonn Connolly coolly slotted the kick and Cashel were back in the game.

Buccaneers took over again and once again bombarded the Cashel line. The defence held out, Buccaneers secured their win and Cashel secured a valuable losing bonus point.

Had Buccaneers this line-up available to them throughout the league they would more than likely be on top of the league.

Cashel were unlucky to meet them when fully loaded and they can take heart from a very brave performance which fell just short.

Cashel play UL/Bohemians at Spafield on this Saturday. The kick-off is at 2.30pm.