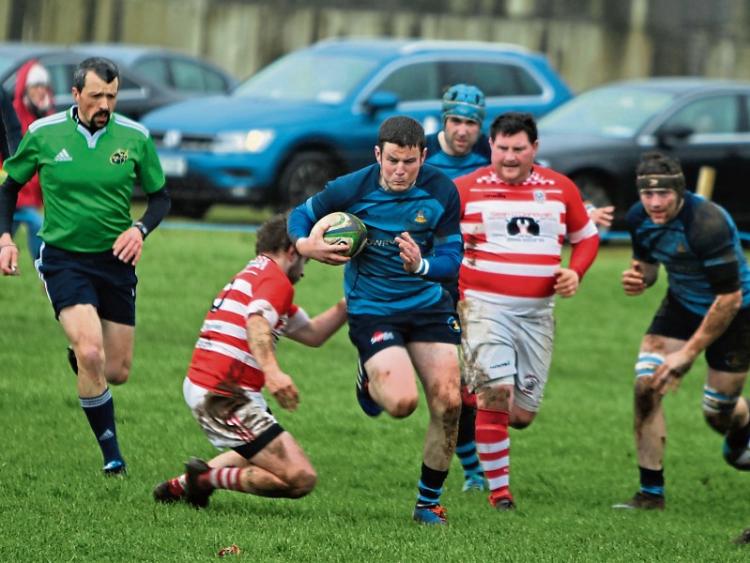 Darren Lowry punches a hole in the Skibbereen defence during last Sunday's away win for table toppers Kilfeacle.

The previous week’s home win against Waterpark seemed to indicate that Kilfeacle were maintaining a consistency in performance. It seemed that they were finally exorcising demons while all the while becoming impregnable at home.

They were now confident that they  were a threat to any team, regardless of whom they were,  home or away.

Confidence is vital for any individual and for every team but only when it is grounded and kept in check. These encounters are always intense affairs where old rivalries renewed, slagging re-ignited and bragging rights played for.

Throw in the added fact that both sides needed the points; Kilfeacle to maintain their lead at the top of the table and Skibbereen to move away from the inevitable dog fight at the wrong end of the table. With this need to win  the temperature rises.

On Saturday last  in The Showgrounds, Skibbereen, the weather was cold, wet and windy but the atmosphere was scalding hot in the cauldron of Munster Junior Rugby and neither side would have any other way.

Both teams played in the same conditions and there should be enough talent and skill within the squad to overcome the conditions.

No, this is definitely the one that every tackle had to count, every decision vital and one mistake would win it or lose it depending on the colour of the jersey that hung over your heart on the day.

Kilfeacle played against the wind for the first half. Skibbereen started with the wind and rain at their backs and the target was to build up a sizeable lead, as playing against the wind in the second half would be a very difficult and exhausting task.

The vast majority of the first 10 minutes were played in the middle half of the pitch, only in the second 10 minutes of the half did Kilfeacle manage to have sustained pressure in the Kilfeacle half. But for all their possession and territorial advantage the visiting side found it very difficult to build up good phases of play and their endeavours were plagued with handling errors partially induced by the playing conditions.

With 19 minutes played and the game scoreless a well- worked move by the Skibbereen side just outside their 22 saw them run the length of the pitch and score a try in the corner. The subsequent conversion kick couldn’t find its target in treacherous conditions.

This score gave Skibbereen an early lead. Kilfeacle’s defence was admirable but in attack they kept making errors, which was partially due to the pressure that the Skibbereen team was exerting.

As the half wore on both teams became more and more anxious to score. Skibbereen knew they needed to score more and make more use of the wind; however they were also wary that a score by their opponents against the wind and driving rain would be devastating.

In the 25th minute Kevin Doyle broke through the line to score Kilfeacle’s first try under the posts. William Staunton converted the try and Kilfeacle took the lead by 7 points to 5.

Kilfeacle then upped the intensity and in the 29th minute Brian Barlow scored another try for Kilfeacle, which William Staunton converted.

With the first half drawing to a close, a combination of indiscipline and errors from Kilfeacle led to Skibbereen entering Kilfeacle’s 22 for only the second time in the game. Skibbereen finally forced their way over to score a try and with a fantastic kick from the touchline converted it.

Ricky Whitney making some hard yards for Kilfeacle in their away win in Skibbereen on Sunday last.

This score was a dagger blow to Kilfeacle. However to their credit they did not let their heads drop.

From the resulting restart William Staunton intercepted a wayward Skibbereen pass to run from the halfway line and score in the corner. William Staunton was unable to convert against the gale so the scoreboard at half time showed 19-14 in favour of the visiting team.

The half-time break was short and neither side complained, as the conditions were not conducive to standing around. In that brief time both coaches communicated their message to their charges and could be heard doing so over the noise of the storm that was blowing as the conditions began to worsen.

Skibbereen started the second half well; however they were now having the same difficulties as their opponents were in the first half. Handling errors, lost footing, misplaced passes and loose ball seemed to be the order the day.

After 10 minutes the Kilfeacle team started to come to grips with defending in the conditions and started to build good phase play and used the weather to their advantage.

Every time Skibbereen made it out of their own half any error or misplaced kick saw the ball return over their heads to relinquish any ground gained.

The second half mirrored the first, with the roles reversed.

After 12 minutes Kilfeacle won themselves a scrum and pushed the opposing pack a full 20 yards before it collapsed. This was an example of the monstrous effort and commitment shown by all on the day.

Five minutes later the visiting side had 17 phases of play, starting outside their own 22 and ending with an unconverted try scored by William Staunton.

The scoreline was now 24 points to 14. Skibbereen were hanging on and knew that they were only a converted try away from earning a losing bonus point.

There were only seconds left but Skibbereen could smell blood and with the opportunity for a bonus point  the team responded and  scored their third and crucial try when they touched down with the final play of the game. The conversion kick was successful and the referee sounded the full time whistle to the joy of Skibbereen and of Kilfeacle.

After the game Ted O’Connor said, “we had the capability and the will-to-win and the squad deserve praise for this hard-fought win. We have the calibre to win in this league, even with key players injured or missing.

“Some of the squad players stood up and were counted today, in particular Christopher Farrell and Ricky Whitney. We now more than ever need the squad to stick together and train every Tuesday and Thursday.

“Both sets of players and supporters deserve praise just for being here in these conditions. On days such as today it is a bit of a lottery and today Kilfeacle had the winning ticket!”

The team as ever are proud and humbled by the amount of support they receive and hope that their supporters will continue to come along and support them.

Skibbereen are wished the very best for the rest of the season, for an enormously entertaining game played in only the best spirit and look forward to doing battle again in the future. 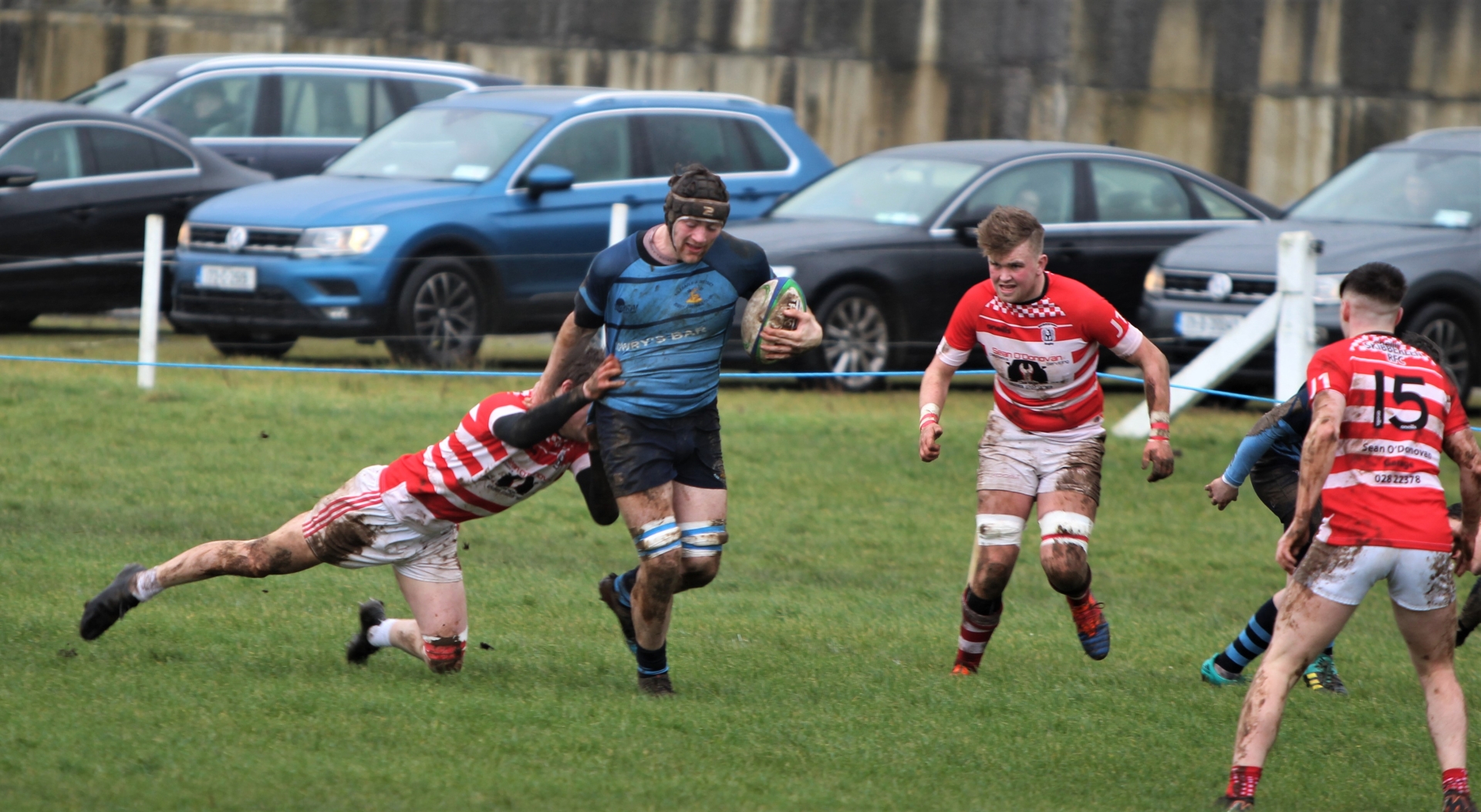 A Skibbereen forward desperately tries to hold on to Kilfeacle’s Kevin Kinnane.

Kilfeacle’s next game is away to Mallow in the last 32 of the Munster Junior Cup on this Sunday, March 1.