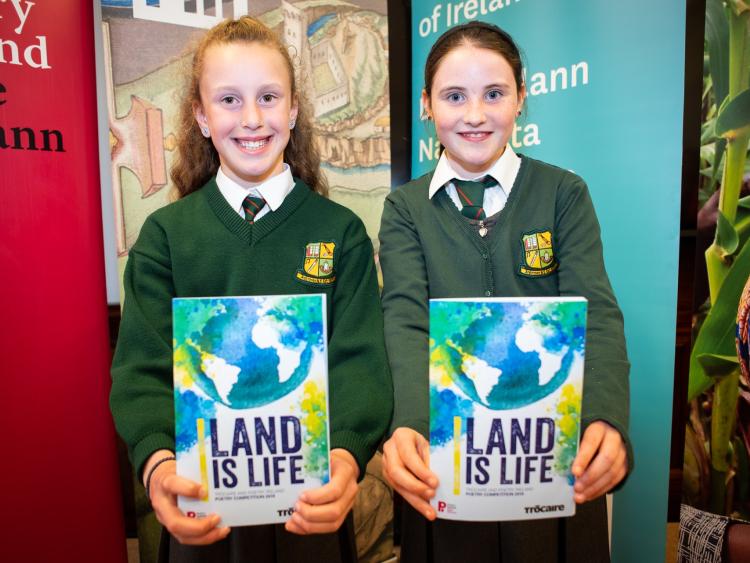 Ardcroney NS were well represented at the annual Trocaire Poetry competition this year after two of the school's pupils were recognised at an awards ceremony in Dublin recently.

Sarah Williams and Carissa Keane from Ardcroney NS were both honoured at the awards evening alongside fellow Tipperary native Hannah Murphy who received a runner-up prize in the ‘Post Primary Senior’ category for her poem Home.

Ardcroney's Sarah was the winner of the ‘Primary Junior’ category with a poem entitled Making the World Better with Carissa the runner-up in the same category with her poem Land is Life: Have you been where they’ve been?

Trócaire’s annual poetry competition, in association with Poetry Ireland, uses the arts to raise awareness about the leading global justice issues of our time. The winners of this year’s competition took part in a showcase event in Poetry Ireland’s centre in Dublin on Culture Night.

President Michael D. Higgins said: “The Trócaire/ Poetry Ireland competition is an important event in Ireland’s literary calendar bringing together the voices of new and emerging poets, including some as young as eight years old, with those of established and distinguished writers. That is such an imaginative challenge and I am delighted to know that many thousands of poets have responded since the inception of the Trócaire/ Poetry Ireland competition in 2012.”

This year’s panel of judges included published author and poet Geraldine Mitchell, who was the overall winner of our very first poetry competition in 2012, together with Aidan Clifford, formerly of CDETB’s Curriculum Development Unit, and Trócaire’s Patricia Groves.

Each year, the winning poems are published in booklet form and presented to the winners at the awards ceremony. The booklets are also distributed at events throughout the year, including poetry readings, Culture Night, literary festivals and schools workshops.