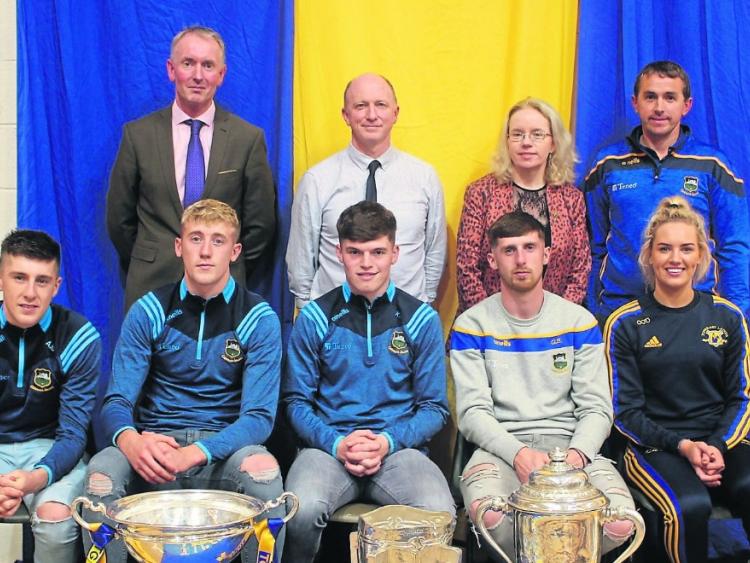 Friday September 27 will go down in the history of Cashel Community School (CCS) as a special day, when the school welcomed back five past pupils who in the previous six weeks had played huge roles on three Tipperary teams that won All Ireland titles.

There were great scenes of joy as each past student was introduced to the packed audience by GAA coach Brendan Ryan.
First was Ger Browne who had played such a huge part on the Tipperary senior hurling panel that won the Liam MacCarthy cup.

Ger was given great praise for winning an All-Ireland minor, U21 and now senior medals in the three years since completing his leaving cert in CCS.

Attention moved to Orla O’Dwyer next, after playing a starring role for the Tipperary ladies football team that secured the All Ireland title earlier in September.

The dual star received huge praise for being such a fabulous role model to all in CCS, and some of the numerous achievements and medals won by Orla in her time in CCS, including being voted student of the year in May 2017.

Orla was wished well with her upcoming move to Australia where she has been offered a professional contract to play in the AFL for Brisbane Lions.

The roles played by Eoghan Connolly, Aaron Browne and John Ryan on the Tipperary U20 team that won the Munster and All Ireland titles in 2019 were then highlighted.

Eoghan was praised for his displays at both wing and full back over the campaign, as well as for the starring roles he played on many CCS teams while in school, which included captaining the senior hurling team to reach the Munster final in February 2018.

Twelve months after coming back to CCS having won a Munster minor hurling medal, Aaron was congratulated on playing every minute in goal in Tipperary’s U20 championship.

Aaron’s performances at such a young age were vital to a Tipp team that scored 19 goals but only conceded four over the campaign. Having played minor and u20 football for Tipperary in 2017 and 2018, John Ryan was complemented on making the Tipperary U20 hurling panel in 2019.

The decision proved fruitful, as John’s efforts have seen him win his first Munster and All-Ireland titles. John won three county senior football titles while playing for CCS, as well as being a huge player on the schools senior hurling team in the same period.

Principal John Gallagher praised the five past pupils on their achievements, and also on being so committed to any team they were part of while in CCS. All five showed leadership and commitment to the school, and have now become role models for present students.

Brendan Ryan thanked all who contribute to allowing students represent the school in all sports, giving special mention to the school management team of Mr Gallagher, Ms Moore and Mr Murray, the teachers who give up so much time to coach the various teams, local clubs and sponsors.

Praise and thanks were given to Val O’Gorman of MR Mister, who has come on board as the main sponsor for GAA for the next five years.

Brendan concluded this special ceremony by encouraging the present students to learn from the hard work, discipline and commitment shown by Orla, Ger, Eoghan, John and Aaron and to strive towards fulfilling their own potential in both their studies and chosen sport.

A proud and special day for CCS ended with the five past students being wished well, and the school choir singing Sliabh na mBan.