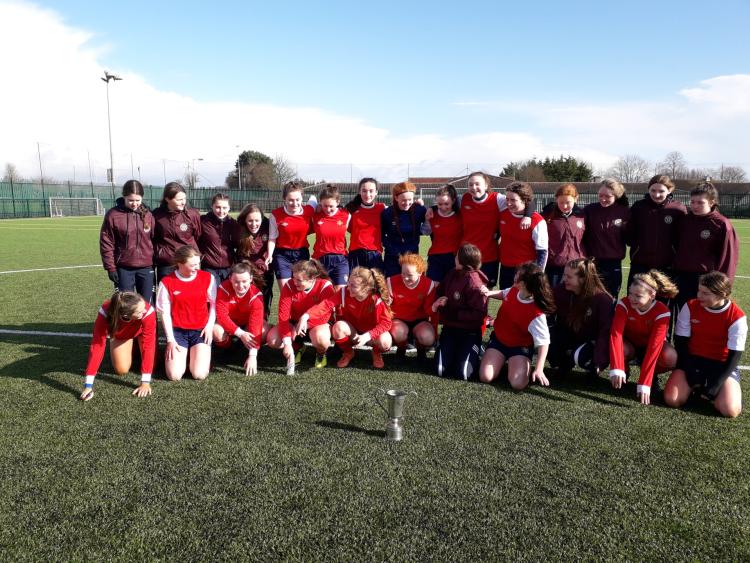 Pres Thurles were crowned Munster U17 soccer champions thanks to a five star display at the Canon Hayes Sports centre. The Thurles girls flew out of the traps and opened the scoring in the tenth minute when an Aoibheann Clancy free kick deceived the Newport netminder.

Before Newport could recover from this early setback Aoibheann Clancy struck again when a well worked corner routine unlocked the St Mary's defence allowing Clancy to fire home her second goal of the contest.

Newport to their credit pressed forward in search of the goal that would reignite their challenge but some smart goalkeeping from Caitlin Shelly and some good defending from Enya Maher and Kate Cavanagh kept the Thurles goal in tact.

The second half began in similar fashion to the first with the Pres players setting the pace and when Molly O'Dwyer helped herself to a third Thurles goal the tie was effectively over.

Aoibheann Clancy quickly completed her hat trick with a sublime free kick and fellow Irish international Grace Flanagan was not to be outdone as she helped herself to a goal after great work from Enya Maher to see the Pres girls into a five nil lead.

Newport had the final say with a well taken Abbie Lenihan goal but the day belonged to Pres Thurles who now advance to the National semi finals where they face off against Connacht champions Claregalway College this coming Thursday.