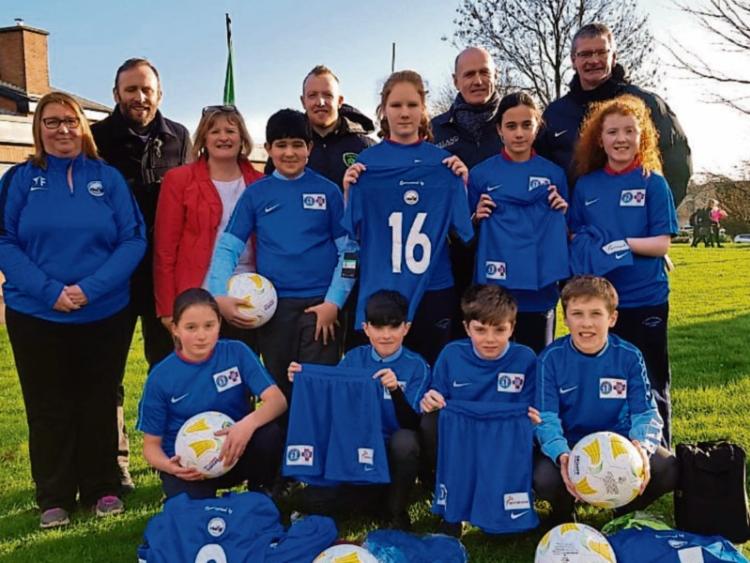 The future of soccer in Cashel, County Tipperary, is bright blue and white as Cashel Town FC sponsor new jerseys and footballs for St. John the Baptist Boy's and Girls schools.

The club is also continuing after school soccer training with volunteer coaching support ahead of the upcoming FAI Spar Schools 5-a-side competition.

2018 saw St John the Baptist Boy's school represent Tipperary as county champions as far as the Munster final where they were unlucky to lose out by a single goal to the Cork representatives.

St John the Baptist Girls school went one better, claiming the Munster title and represented both county and province at the Aviva stadium, cheered on by busloads of family and classmates, in what was a hugely proud day for the school, club and town.

In 2019, Cashel Town FC coaches, in partnership with FAI regional development officer Stephen Quinn, are providing expert coaching to 5th and 6th class boys and girls ahead of this year’s FAI Spar Schools five-a-side Tipperary competition with both schools hoping to retain their county titles.

Over 60 children are taking part in the coaching sessions, which build on existing soccer skills and reinforce the importance of health and fitness and the fun associated with active participation in sport for both boys and girls.

“It’s a pleasure to coach the boys and girls after school. The excitement and the laughter lifts the kids up, and the effort they put in is brilliant to see," said Cashel Town FC schools liaison Tina Flanagan.

"We would like to thank Stephen Quinn from the FAI, all the Cashel Town coaches who have given up their time and of course principals Will Ryan, Mary Andrews and the teachers who are staying back after hours, allowing this event to go ahead. It’s so rewarding to see so many children having fun, enjoying the sport and getting hours of exercise in a supportive environment."

Supporting the initiative with additional soccer kit is local employer Amneal Pharmaceuticals, who have been a consistent supporter of both schools and Cashel Town FC since they opened in Cashel in 2016.

Speaking at the launch of the sponsorship last Tuesday, Amneal’s John O’Sullivan stated: “We are delighted to support Cashel Town and both schools in promoting such healthy activities for primary school children in the area, it’s particularly nice to see both the boys and girls getting access to the same quality coaching and equipment. Amneal’s company vision is “we make healthy possible” and seeing over 30 children playing soccer today with smiles on their faces is absolutely in line with what we want to be involved with as a company, it's a credit to Cashel Town FC and both Schools."