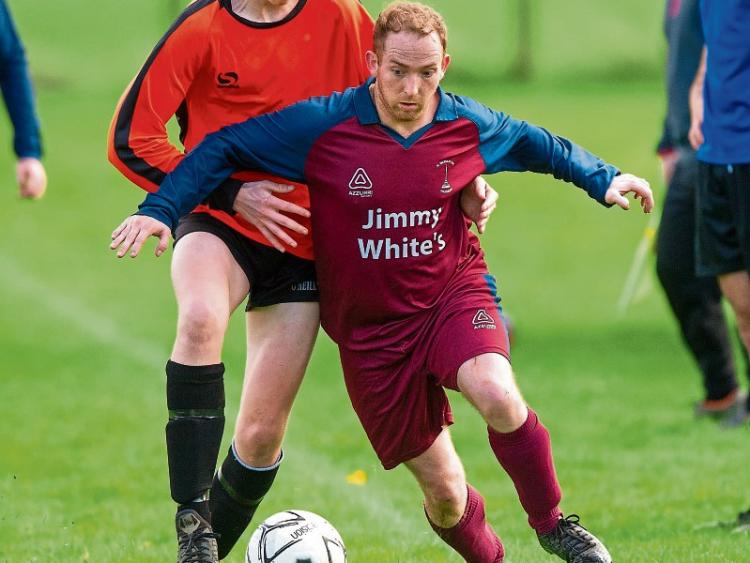 St Nicholas got their Third Division promotion push back on track on Sunday against a Suirside side that has been low on confidence after a few bad early season results. Both teams played well and had half chances before the visitors took the lead from a direct free kick right at the edge of the area that was slammed to the net by Declan O’Riordan ten minutes before the break.

The second half proved much similar with both teams creating chances without troubling either keeper before St Nicholas got the vital second in the eightieth minute when they were awarded a penalty that was despatched by John Joe O’Brien.

The home side battled on and created more opportunities but failed to capitalize before the final whistle.

Burncourt Celtic continued their recent run of good form in the league with another home win on Sunday last.

The home side started brightly and were ahead in the fifteenth minute when with a free kick from inside his own half, David Baker deceived the visiting keeper and looped a ball over his head and into the net.

The second half was a dull and tough affair with both sides creating a couple of half chances before Niall Halley stole the points for the hosts when he pounced on a chance six minutes from time and slammed home.

This was a game of two halves with the home side totally dominant in the first, but through a mixture of poor finishing and excellent goalkeeping, they were only able to muster one goal when Cathal Ryan broke the off side trap on the half hour mark and rounded the on rushing keeper to tap home.

The second half saw Kilsheelan the better side but they found the home keeper Tony Black in top form. Try as they may and with the hosts down to ten men for much of the half they couldn't find the equaliser, with Black pulling off his second clean sheet of the day having already frustrated Wilderness earlier in his side’s  Division 1 win.

Tipperary Town do their neighbours St Michael's a little favour

Mullinahone laid down another marker for their promotion hopes when they had an excellent three goal to one win against local rivals Moyglass United on Sunday. The home side opened the scoring in the fifth minute when an exquisite chip by Martin Conlon gave the visiting keeper no chance.

Mullinahone didn’t panic however and were back on terms after a period of pressure midway through the half forced a home defender to put through his own net. They then took the lead five minutes before the break as they forced the home side into conceding a penalty after another period of pressure, and this was fired to the net by Alex Maher.

The second half was a bit of a cat and mouse affair with Mullinahone sitting back and absorbing the pressure that the hosts were putting on, and in the final minute the visitors made the points safe with a breakaway goal by Ashley Laslett after the hosts had over committed in attack.