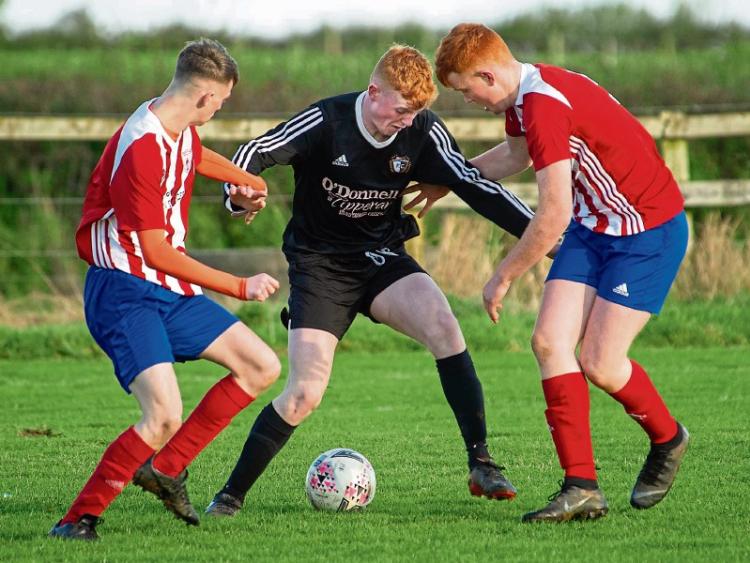 Suirside have put some poor early season form behind them and fought their way through to the next stage of the Peter O’Reilly Cup with a good win over Tipperary Town on Sunday last in Grange.

But they had to do it coming from behind after the visitors took the lead in the twentieth minute with an excellently taken goal by Cathal Ryan.

Suirside equalized ten minutes before the break through an own goal and quickly followed this with another two minutes later from the head of Darren Sweeney.

The visitors then got back on terms themselves six minutes into the second half with a goal from Kevin Brown, and although both teams created chances after that, neither could force home a winner inside 90 minutes.

A 98th minute goal by John Darmody put Suirside back ahead and Darren Sweeney scored a second seven minutes later to make the score four goals to two, to send Suirside through to the next round.

Clonmel Celtic probably travelled to Moyglass as slight favourites in this game, but as always the home side are the match of anyone on their day and they showed that again on Sunday.

The game was a very close affair with the visitors shading affairs in the first half but unable to break down a doughty defence, sending the teams to the break level at nil all.

Celtic eventually opened the scoring ten minutes into the second period when Shane Mullins fired home from the edge of the area, but twenty minutes from time the home side levelled things up when Owen McCormack beat a number of defenders and squeezed home a shot at the near post.

There were no more goals in regulation time but halfway through the extra time period, a long ball over the top by McCormack found Jason Ryan and he ran on to score and win the tie for his side.

Mullinahone will harbour thoughts of winning this competition and they booked their places in the semi-finals with a good win at home to Bansha Celtic on Sunday last.

The home side were in control in the first half and took a two goal lead to the break courtesy of strikes by Mike Cooper and Ryan Hicks. Although Bansha Celtic did improve  in the second period and pulled a goal back from the penalty spot, the home side maintained  enough control to hold on and carry on to the next stage.