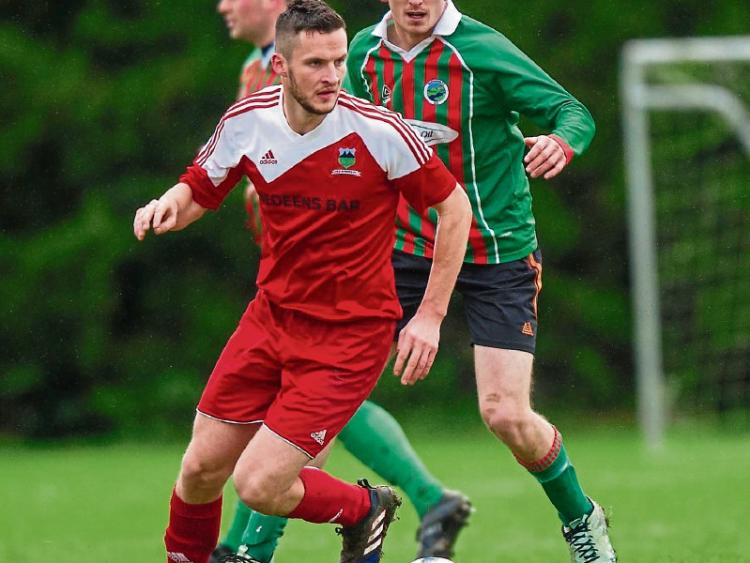 Alan Condon was on the mark for Vee Rovers in Castlebar.

Vee Rovers fairy tale run in this year’s FAI Cup ended on the far away fields of Castlebar on Sunday, but not before they gave more than a very good account of themselves as they pushed a very strong Castlebar side to the pin of their collar for much of the game.
The TSDL side showed no signs of travel fatigue after the long trip when they attacked their hosts right from the off making the best of the chances in the first quarter of the game. And they were rightly rewarded when they took the lead, even if it came from a very fortuitous piece of luck after the home keeper misjudged Christy English’s corner kick and it flew over his head and direct to the net.
This sparked the Mayo side into action and they were level eight minutes later when the Connacht League ‘Player of the Year’, Jordan Loftus turned a difficult half chance into a goal after being quickest to a breaking ball in the Rovers penalty area.
Unperturbed though, the Tipperary side struck back again minutes later to re-establish their lead when a brilliant passing movement through the middle opened Celtic wide open and Alan Condon fired to the net.
But just when it looked like the visitors would carry that vital lead to the break, the home side managed to pull level again when Joseph O’Reilly beat the offside trap and fired a shot low past the keeper to the net.
The second period saw Vee begin well again and they thought that they had taken the lead for the third time three minutes in, only to see Shane McGrath’s shot from the edge of the area clip the top of the crossbar and rebound away to safety.
Eventually though the visitors were undone by their own openness and attacking, when they were cruelly caught on the break and punished by a clinical finish in the 65th minute by a Ben Murphy effort.
This knocked the wind from the sails of the Tipperary side and Celtic doubled their lead 15 minutes from the end when Loftus showed his class to grab a second goal for his side. Ben Murphy added his second and his side’s fifth in the final minutes to ensure the victory, but it was hardly what Rovers deserved after such an excellent performance.

Cahir Park’s interest in this year’s FAI Junior Cup ended on Sunday in Dublin against a very strong Crumlin United side, who will be among the favourites to lift this year’s cup.
The hosts got off to the perfect start scoring from close range after only six minutes and it took the TSDL side a while to clear their heads after that significant setback.
Just when it looked like they had weathered that early storm and managed to stay in the game, ‘The Park’ were hit with a sucker punch four minutes before the break when the Dublin side doubled the lead.
The second half continued in the same vain and on the hour mark Crumlin made the game safe when they added a third.
A fourth in the final minutes was harsh on the young Cahir Park team that never let their heads drop against top class opposition. No doubt, they will see this as a good experience for future games and benefit from it.