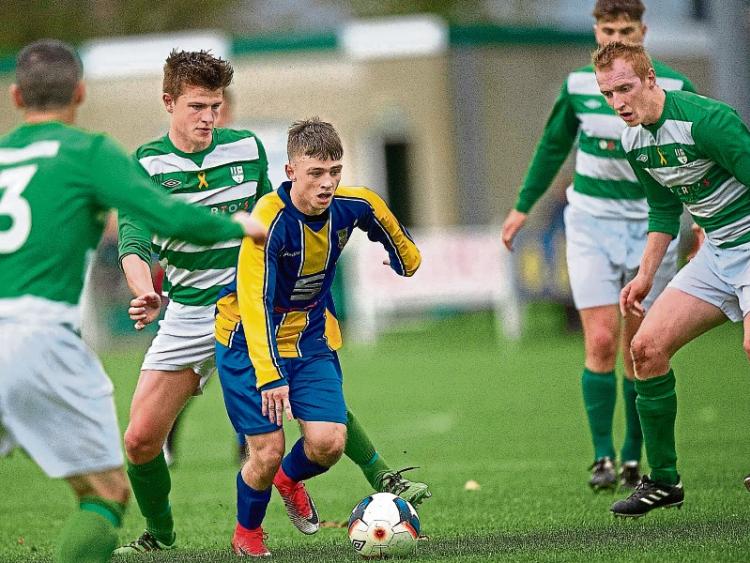 Stand out player - Willie Armshaw hit a hat-trick for St Michael's in their FAI Junior Cup 5th Round win at Birr at the weekend.

FAI Junior Cup holders St Michael’s advanced to the 6th round of this year’s competition by virtue of a strong second half against a spirited Birr side that battled to the end in their last 64 tie on Sunday last.

The first half of the game was largely poor fare with both sides struggling as a gale blew across the field and hindered ball control for both sets of players. The hosts sat quite deep and tried to use long balls to get at the Saints defence, and in the ninth minute this tactic almost paid off when Sean Cahill had a shot that barely cleared Adrian Walsh's crossbar.

Saints did get forward in these early stages but poor deliveries and good goalkeeping them at bay. They finally took the lead in the 24th minute when Willie Armshaw managed to get a cross in and with goalkeeper Conor Hogan off his line, John Connery passed to Jimmy Carr who saw his left foot shot from 18 yards rattle the net.

The lead was short lived however, as Birr pulled it back to one all only five minutes later when a home free kick took a deflection and the ball skittered under the dive of Adrian Walsh.

The visitors upped the ante in the second half as the weather abated a bit and their superior fitness saw Birr begin to wilt. Jimmy Carr did excellently just before the hour mark to get down the left wing and fire in a good cross that saw Willie Armshaw flick into the net at the near post to put his side 2-1 up. Minutes later they doubled that lead when Armshaw picked up a loose pass following a goal kick and unleashed a piledriver from 35 yards yards that caught Conor Hogan napping in the home goal.

Saints were now cruising and Armshaw rounded off a man of the match performance 16 minutes from time when he volleyed on a Shane Ryan pass and gave Hogan no chance again in the home goal.

This result sets up the holders for a long trip to Greencastle in Donegal in January as they strive to retain their FAI Junior Cup crown, and in this form, it would be hard to bet against them taking another trophy to the back of the Church.