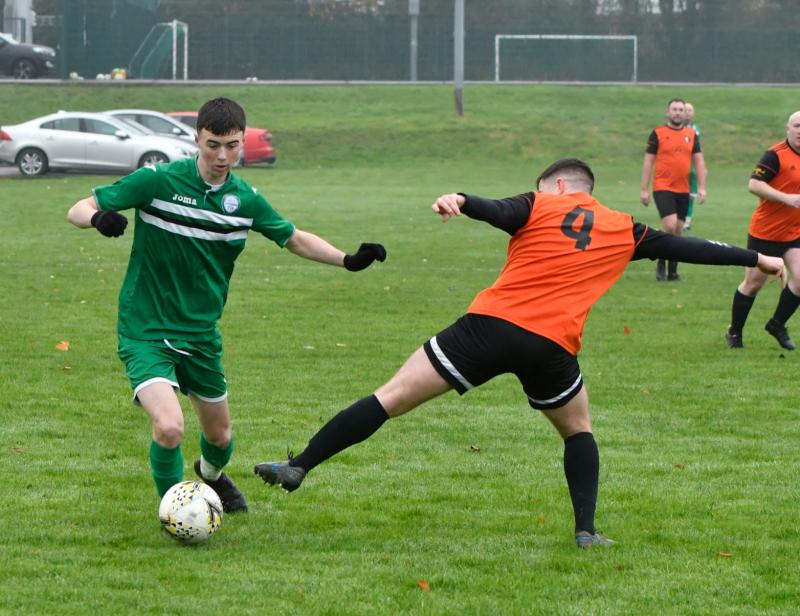 Cullen Lattin 4 – 6 Clonmel Town
These two teams played out a ten-goal thriller that kept the crowd thrilled throughout in Saturday’s only Youth First Division clash. On a very cold day, the visitors started the better and their size and physical presence were causing the hosts all sorts of problems.
They eventually made those advantages count, forcing the ball over the line from a corner that wasn’t cleared to make it 1-0 in the tenth minute.
Another corner eight minutes later was headed home to make it 2-0, and with the home side in all kinds of problems dealing with long, high balls into their area, it looked like it was going to be a long day. But they worked their way back into the tie and forced a corner themselves on the half-hour mark, that after some head tennis saw the ball break to Evan Carrie, who volleyed it into the top corner.

Buoyed by this, the hosts started to play and move the ball around and got completely on top.
Five minutes before the break, Tom Ryan (Bob) played a through ball to Tristan Stokes, who got there before the Clonmel goalie and he rounded him to tap into the empty net and level the tie.
They kept attacking and right on the stroke of half- time won a free after some great work from Dylan McGrath. Stephen Carey stepped up to take it and from all of thirty yards rocketed it into the top corner, giving his side the unlikeliest of leads, 3-2, at the break.
Sadly, though, for their supporters they seemed to retreat back into their shells in the early part of the second half and let the visitors dominate, with long balls played in behind the defence.
They conceded another goal at set-piece five minutes in, and Town now looked really up for it, adding a fourth on the hour mark to regain the lead.
Ten minutes later they added a fifth but Cullen finally pushed back and in the 80th minute Thomas O’Mahoney got in to to reduce the deficit to just a single goal again.
The home side were making chances now but just couldn’t get a goal to draw the game level. In the final minute, with almost the whole side pushed up for a free kick, the ball broke and Clonmel carried it the length of the field to add the insurance goal they needed and make it 6-4 in the end.