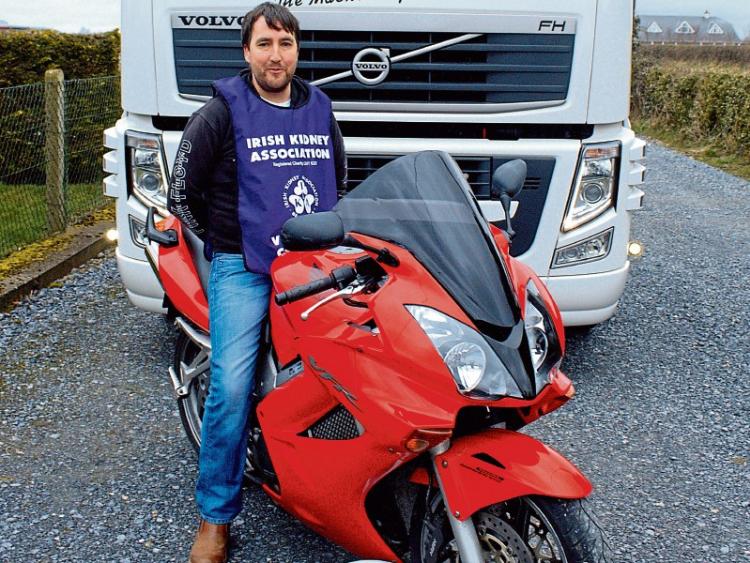 Owen Hanrahan is hoping to be accepted onto the kidney transplant waiting list in the near future.

A Tipperary father of three will lead a motorcade and exhibition at The Hub at Cillin Hill, Kilkenny, in aid of the Irish Kidney Association this weekend.

Owen Hanrahan’s world was turned upside down in 2016 when he suffered kidney failure. Soon after receiving his shock health diagnosis, the 39-year-old had to wind down his small haulage business, leaving an uncertain future for his wife Therese and their sons James, Paul and Matthew.

“I was greatly heartened by my community which rallied around me and in a short space of time they raised €17,000 through a truck run to help support me and my young family. This eased the financial burden which was thrust upon us. Like so many other formerly self-employed people, it was difficult to access disability or any other state allowances for almost a year after I ceased working,” Grangemockler’s Owen says.

Owen, along with the support of friends and members of the Kilkenny branch of the Irish Kidney Association, are putting plans in place for the exhibition, which will include swift cars, trucks and motorbikes. The event takes place on Sunday 8th April from 12-4.30pm, marking the end of Organ Donor Awareness Week 2018. Contact kilkennybigevent@outlook.com to take part.

After feeling unwell for some time, Owen payed a visit to his doctor in July 2016. This led to a shock diagnosis that he had nephrotic syndrome and was in kidney failure. He spent over 10 weeks in hospital in Waterford and in this time he saw his weight soar from 11 and half stone to 15 stone due to fluid retention. His kidney function declined to less than 16% and he commenced dialysis treatment. Initially, he underwent dialysis treatment three times weekly at Fresenius Dialysis Centre in Kilkenny and in recent months his three and a half hourly treatments have been reduced to twice weekly. Although the dialysis is working well for him, he is very lethargic with his condition and is hoping to be accepted onto the transplant waiting list in the near future.

“I was overwhelmed and humbled by the support I received from my friends and local community since my diagnosis. As someone who worked hard all my life, it was difficult to have to succumb to my illness and wind my business down. However, I hope that I will be able to receive a life changing kidney transplant which will help turn things around for me and my family. I would encourage everyone to consider organ donation, as like me, you never know when organ failure might visit a member of your family. Organ donation saves lives. It is such a selfless decision for families to donate a loved one's organs so that other people like myself can benefit from the gift of life," Owen, who now lives in Killamery, Co. Kilkenny, adds.