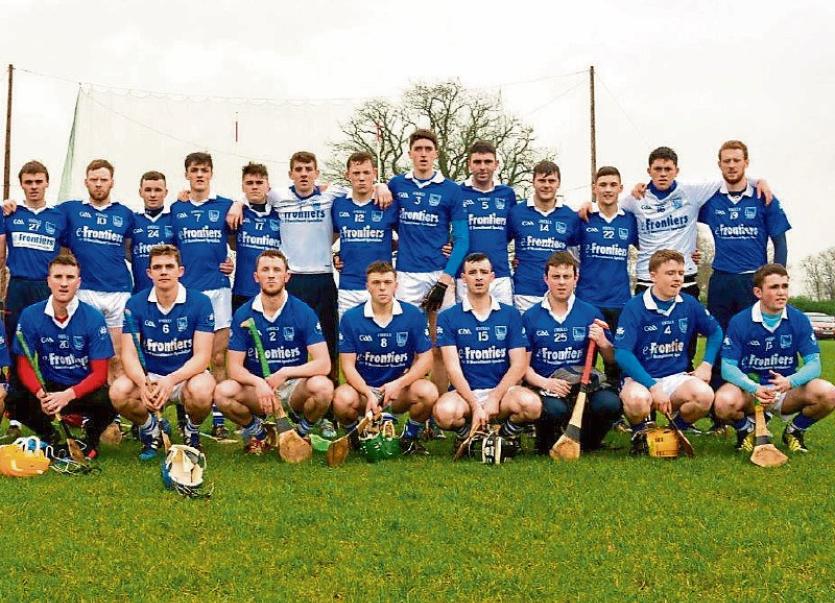 Thurles Sarsfields powered their way to a third Clean Ireland Recycling county under-21A hurling title in four years with a comprehensive defeat of the West Tipperary combination of Cappawhite and Sean Treacy's at Bansha on Sunday.

A seventeen-point winning margin possibly flattered the Thurles lads, but there was no doubt about their superiority as they brought the curtain down on a most successful 2015 campaign which saw them retain their county senior hurling title and come within a whisker of winning the intermediate crown also. It reflects the hugely healthy state of hurling in the town and it is worth noting too that all the management teams in the club are home-grown.

Sarsfields were hot favourites for Sunday’s title having beaten the 2014 holders Loughmore-Castleiney in the Mid final and then accounted for Nenagh Éire Óg in the county semi-final, their credentials were well-established, and once Pa Phelan had their first goal in the 12th minute to put them 1-3 to 0-3 ahead, there was no doubt which side was going to bring home the Dwan Cup.

Indeed, that goal typified the quality of the Sarsfields side as Ronan Maher and Conor Lanigan combined to set up Pa Phelan who took his chance with aplomb. Sarsfields were slicker, and more composed, and they had the fire-power to turn possession into scores of a high order in difficult conditions. And they also had quality in defence, containing the combo’s attack to three points from play.

Playing a third game in eight days, particularly at this time of year, was always going to be difficult for Cappa-Sean Treacy's, but they gave it everything. They had some fine individual performances but unfortunately for them, they did not have enough of them, and when they went in at half-time trailing 0-6 to 1-10, having had the aid of the breeze, the outcome was inevitable.

Even against the breeze, Sarsfields called the shots. Rian Doody’s brace of pointed frees for the West boys in the opening five minutes hinted at the possibility of a shock. Seanie Butler pointed a Sarsfields free before Patrick Carey rose another flag for the combo. Points from Dylan Bourke and Aidan Doyle levelled the game before Pa Phelan netted for Sarsfields in the 12th minute. And now Sarsfields turned the screw, hitting the next seven points without reply, Dylan Bourke (2), Kevin Dunne (2), Seanie Butler (2) and Billy McCarthy the marksmen, as the superiority of Stephen Cahill, and Billy McCarthy at midfield, and the excellence of Cathal Moloney, Jack Derby and Ronan Maher in defence, effectively strangled the West challenge.

Two Rian Doody points in the closing minutes of the first half, both from frees, gave Cappa-Sean Treacy's hope but they were seven points behind (0-6 to 1-10) at the break, with the proverbial mountain to climb when they resumed.

It was going to take a mighty effort on the part of the West lads to turn the tide. The effort was there, but they never threatened to overtake opponents who were picking off scores with relative ease as they went on to outscore their opponents by 1-12 to 0-5 in this period. Sarsfields were 1-19 to 0-10 ahead in the 53rd minute when a surging Ronan Maher run to link up with Aidan Ryan saw the delivery set up Conor Lanigan to flick home their second goal. Game well and truly over now.

It was a quality performance by Sarsfields who could afford the luxury of using their bench in the closing stages. They have been the form team in the competition, and while many will criticise the lateness of the final, the Thurles lads kept their focus and produced the goods when it mattered. They lost Pa Phelan to a first half injury but the strength in depth in the squad was seen in the quality of the replacements introduced.

Such was the all-round excellence of the Thurles performance that it would be invidious to single out individual players for mention, with all six forwards and the two midfielders getting on the score sheet as well as half-time sub Conor Stakelum.

Cappa/Treacy's battled hard as would be expected of them but they did not have the resources of their rivals. In a bid to boost their attacking options, they moved team captain Sean Ryan (W) to the forward line in the second half, but there were too many holes to plug. Defender Paul Ryan was unable to start because of illness but came on during the game, while Russell Quirke was out of the country, absences they could ill afford.