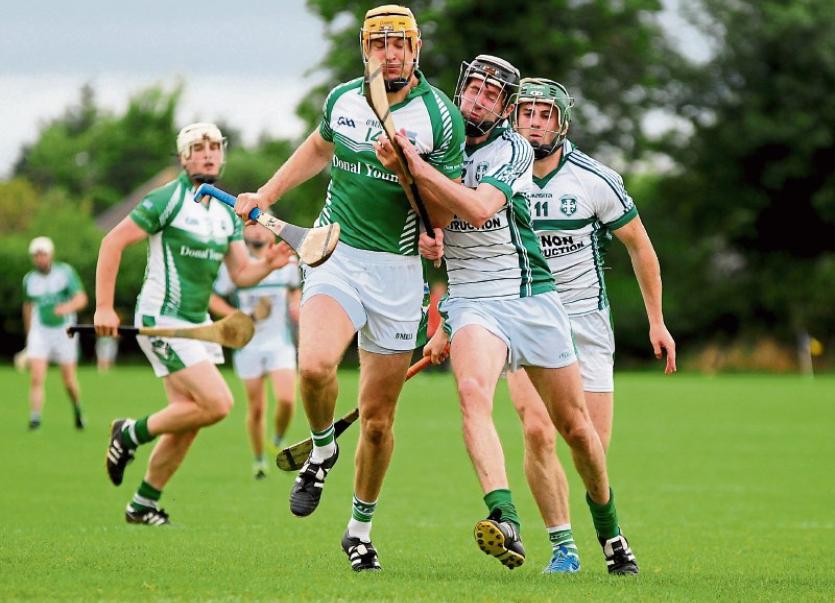 The scoreline tells a lie. While there was little doubt that Drom-Inch would win this Centenary Agri Mid Tipp senior hurling championship semi-final tie at Boherlahan on Sunday, the eventual victors had a far closer shave than the seven point margin between them and neighbours Holycross Ballycahill, might suggest.

It came down to class in the end and while Holycross Ballycahill showed a return to the spirit of old with great application and tenacity throughout the field, Drom-Inch had the class to create, and take, the chances when they came their way - two goals in as many minutes in the third quarter putting the game beyond the challengers, eventhough they managed to cut the deficit to three with eight minutes to go.

One wondered how Holycross Ballycahill would shackle Seamus Callanan - their ploy was to man mark him with his inter county colleague Cathal Barrett who did a fair old job on him too. But, they also ensured that high intensity play in their half forward and midfield sectors would make for a rushed supply to the Drom-Inch attack - Callanan included - and it worked a treat, but could not be maintained for the full hour.

So, Barrett took up position on Callanan from the off and they had barely acknowledged each other than Donncha Duggan had the ball in the Drom-Inch net as he turned in a high ball past keeper Damien Young. It was just the start that the underdogs needed and it gave them great heart and belief.

That goal was still the difference between them by the end of the first quarter, with both sides having traded four points apiece in the meantime - the inform Liam Dwan getting two, to go along with Luke O'Mara and Thossy Comerford efforts for Holycross Ballycahill, while Callanan from a free, Tommy Nolan, Johnny Ryan and David Collins added others for Drom-Inch.

Dwan had another pointed free before Shane Hassett bagged a Drom-Inch goal in the 19th minute after getting onto a breaking ball from Johnny Ryan. Drom-Inch were in front for the first time and would not be lead for there on - they tagged on Johnny Ryan, David Butler, Callanan and Tommy Nolan (2) points before the break, against two further Dwan scores for their opponents. Drom-Inch had scored six of the last eight scores of the half and it looked ominous for Holycross Ballycahill who, in their own right, probably felt that they were in a decent enough position at the break (1-9 to 1-7), with the breeze to aid them in the second half. However, they were to rue missed chances - 5 wides in the first 11 minutes alone were costly.

Drom-Inch meant business in the second half with Holycross Ballycahill keeper John Ferncombe called into action first to deny Tommy Nolan and then to beat away a Seamus Callanan penalty effort in the 6th. Liam Ryan and Luke O'Mara had traded points in the meantime, but two goals in two minutes from Kevin Butler and Seamus Callanan seemed to have ended the game as a contest. Not so.

Holycross Ballycahill showed great pride and determination as they battled their way back into contention. They gritted the teeth, put the goals setback behind them and went at Drom-Inch again.

Cathal Barrett was having a fine game on Callanan while Cathal Carroll and Jamie Woods were getting onto a lot of ball. The scores materialised with Liam Dwan firing over two from frees, followed by one from Thossy Comerford and Dwan again from play. And when Jack Skehan and Comerford had further scores, Holycross Ballycahill had gotten six of the seven in that 10 minute spell of play, as well as seeing Drom-Inch keeper Damien Young deny Liam Dwan a goal at the end of the third quarter.

With the gap down to three and the momentum with Holycross Ballycahill, Drom-Inch upped the tempo. Callanan pointed and then sub Paul Kennedy got inside to bag a fourth goal, before David Butler had another point - the three scores coming in two minutes and putting the seal on victory.

Again Holycross Ballycahill came back with Jack Skehan, Liam Dwan and Jamie Woods points, but Callanan and Paul Kennedy also had Drom-Inch scores to see out this highly entertaining and eventful game.

Victory then for Drom-Inch who showed flashes of what they are capable of. They got it hot and heavy from their opponents but still had the wherewithall to see out victory - the sign of a fine team. And, even with their main tallisman well marshalled - Callanan got just two scores from play in the hour - they found winners in David Collins, Tommy Nolan and James Woodlock who had a fine game at centre back/midfield. Liam Ryan was very effective too while Eamon Buckley was as solid as ever at full back.

Defeat marked the end of the campaign for Holycross Ballycahill who certainly appear to have progressed significantly this season. They played with heart and drive which has often been missing in recent years, but they had to give best to Drom-Inch who simply had too much for them. Liam Dwan had one of his best outings for them in a few seasons, while Cathal Barrett, Cathal Carroll and Jamie Woods worked very hard. Jack Skehan finished strongly while John Ferncombe made some fine stops in goals.