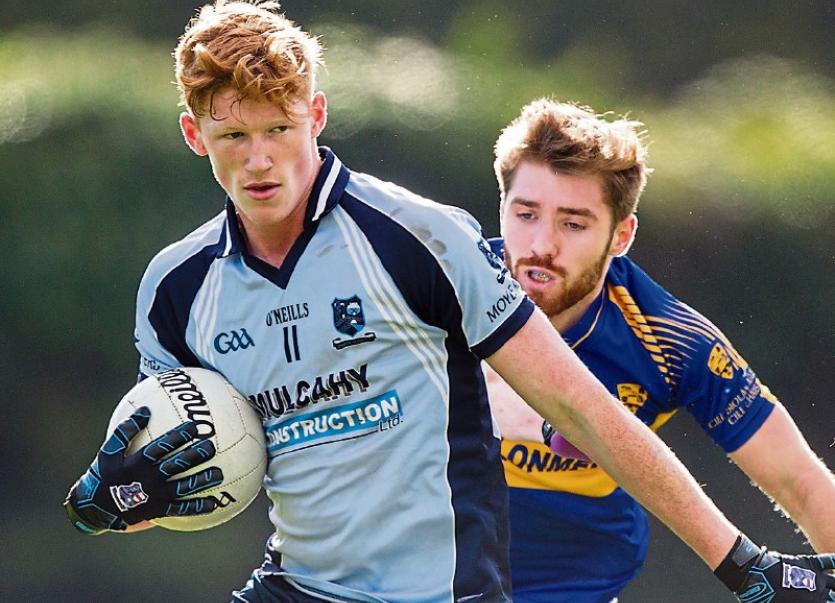 Moyle Rovers and Loughmore/Castleiney will contest next Sunday's County Senior Football Championship Final in Cashel after coming through their respective semi-finals on Sunday.

Loughmore, champions in 2013 and 2014, dumped holders and Munster champions Clonmel Commercials out of the championship following a hard-fought contest at Boherlahan.

Inspired by the Tipperary hurling All-Ireland winning brothers, John and Noel McGrath, Loughmore led by 0-5 to 0-4 at half-time.

Commercials fought back well in the second period and a Jack Kennedy point early in the half had them ahead by 0-7 to 0-6.

However Loughmore responded magnificently with further scores from captain Liam McGrath, Tomas McGrath and Cian Hennessy, and a late Michael Quinlivan free wasn't enough to prevent the Clonmel team from slipping to a narrow 0-9 to 0-8 defeat.

The other semi-final was a more straightforward affair, with Moyle Rovers running out easy winners over Kilsheelan/Kilcash by 4-14 to 0-6.

The game was over as a contest at half-time when Rovers led by 2-8 to 0-3, thanks to an impressive haul of 2-4 from Diarmuid Foley.

Two early second half goals  from Liam Boland and Stephen Quirke (pictured above in action against Kilsheelan's Adrian Maguire) turned this game into nothing more than an exhibition, as Rovers ran out comfortable winners.

Elsewhere Fethard regained their senior football status when they defeated Golden/Kilfeacle by 1-11 to 2-7 in an exciting County Intermediate Football Championship Final at Cashel on Sunday.

It was close all the way through but Fethard finished the stronger with three unanswered points over the last five minutes to seal victory. And it was corner-forward Brian Healy’s superb free-taking accuracy that got them over the line, the match-winning free from 45 metres coming in the 4th minute of additional time.

Meanwhile, in soccer, the shock of the weekend was Clonmel Town's 5-1 hammering by Bansha Celtic in the third round of the FAI Junior Cup.

Another Clonmel team, Celtic, are safely through to the next round after they beat Clodiagh Rangers from North Tipperary by 8-1.

In the FAI Cup there were also wins for Kilsheelan United, Tipperary Town, Peake Villa, St. Michael's and Cullen/Lattin.

In the only Premier League game of the day Old Bridge beat Galbally United by 2-0.

In the Munster Youths Cup second round on Saturday St. Michael's had a comfortable 8-1 win over Clonmel Celtic in Clonmel.

There were also big wins for Clerihan, who defeated St. Nicholas 5-1; and Cahir Park, who beat Peake Villa 7-0.

In rugby Clonmel have maintained their lead at the head of the Munster Junior League's first division. They were leading fellow Tipperary side Kilfeacle by 20-3 with eight minutes remaining when referee Enda O'Shea had to retire with a leg injury, but under the rules the result will stand.

Kilfeacle took the lead with a Shane Looby penalty. Clonmel responded strongly with tries from Jaco Oosthuysen, Mark Corby and Luke Horgan, and a conversion and penalty by Conor Cooney, to consolidate their lead at the top.

It's an all-Tipperary affair at the top of the table with Clanwilliam moving into second place after they beat Muskerry 26-12.

Niall Leahy was on fire for the Tipperary town team, scoring two tries and three conversions, while Darragh Crowe and Jack Grey scored a try each.