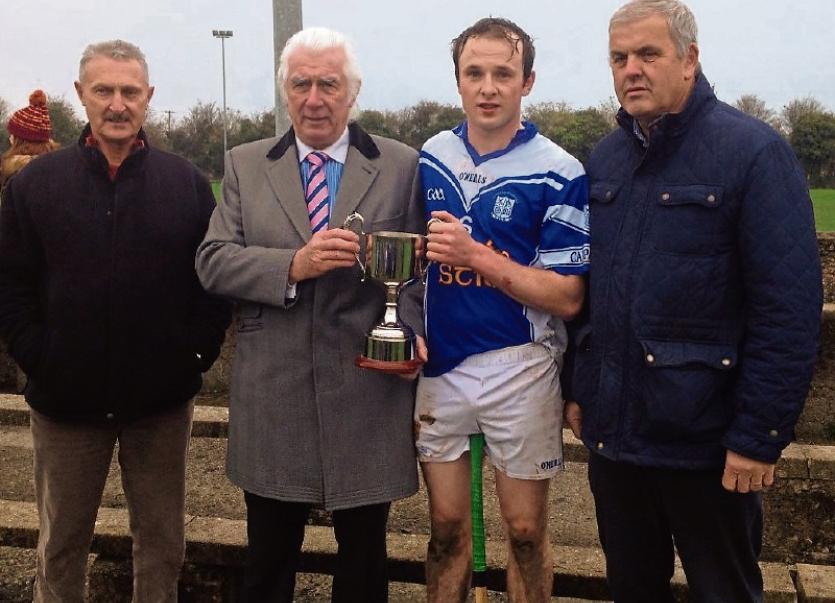 Sean Ryan (R) accepted the Tony Brennan Cup from West Board chairman John O’Shea after Cappawhite/Sean Treacys beat Golden/Kilfecle in the West U-21 A Hurling Final.

Cappawhite/Sean Treacys retained the O’Dwyer Steel West Tipp U-21 A Hurling Championship on Sunday last in Cashel when they beat Golden/Kilfeacle by 4-14 to 3-6 in the final.

It was the combination's third U-21 divisional title-in-a-row, as they were B champions in 2014.

Tim Meagher made a huge contribution for Cappawhite/Sean Treacys, as he scored a hat-trick of goals.

They will now play Thurles Sarsfields in the county semi-final. Sarsfields won the Mid Final when they beat Holycross/Ballycahill by 2-28 to 0-17 at Boherlahan on Sunday.

The West U-21 B Hurling Championship was also decided last weekend when Cashel King Cormacs had a comprehensive 2-13 to 0-5 win over Eire Og Annacarty/Donohill.

King Cormacs led at the break by 1-7 to 0-4 and they were much the stronger side in the second half.

In South Tipperary Grangemockler-Ballyneale won the local derby in the U-21 B Hurling Championship Final when they defeated Mullinahone by 1-17 to 1-13 in Cloneen.

The combination team were ahead by 1-9 to 0-7 at half-time, the goal coming from one of their best players, John Lyons.

Mullinahone fought hard on the turnover and when Joe Hogan goaled midway through the second half the gap was reduced to just two points.

Grangemockler were grateful to a fine save by goalie David Power as they did enough to secure the victory.

Moyle Rovers beat Clerihan in the South Junior B Football Championship in midweek and they were in action again a few days later when they met Arravale Rovers in the County Final.

Here their good run came to an end when they lost to the Tipp town team by 1-8 to 0-5, the goal coming from Timmy Dalton's free in the first half.

Clonoulty/Rossmore, the last remaining hope of Tipperary success in the Munster GAA club championships, bowed out of the Munster Junior Football championship at the semi-final stage when they lost to Gabriel Rangers of Cork by 1-13 to 1-4 in Clonaklity on Saturday.

The Tipperary Town team are now through to the open draw of the competition. So too are Thurles Town, who beat Tipperary Town 3-1; Clonmel Celtic, who defeated Bansha Celtic 1-0; and Peake Villa, who get the better of Cullen/Lattin by 8-0.

In the FAI Youths Cup Cahir Park beat Conn Rangers from Mayo by 9-1 in Cahir Park while another standout score was in the Peter O'Reilly Cup, where Peake Villa trounced Bansha Celtic's second team 15-0.

In rugby Kilfeacle are through to the semi-finals of the Munster Junior Club Challenge Cup.

The West Tipp club booked their place in the last four by beating Galbally 17-13 in Galbally on Sunday.