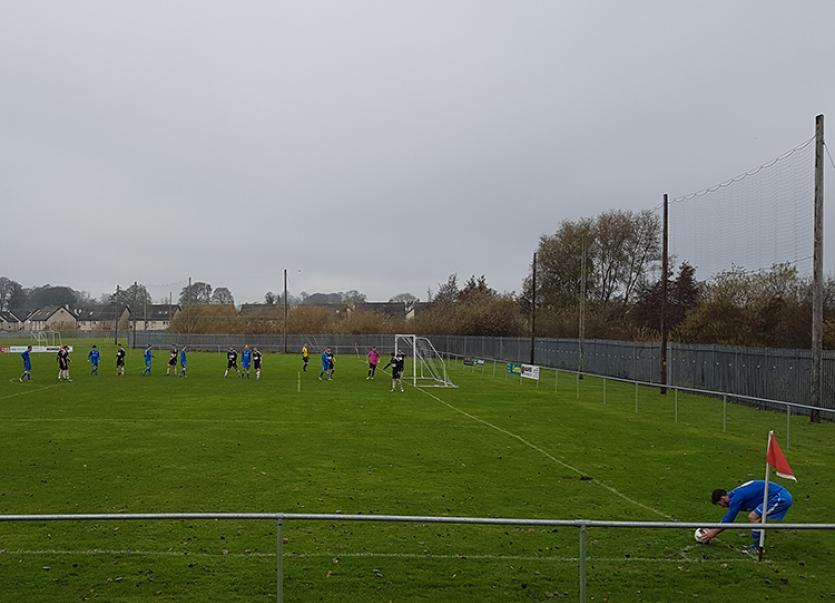 On Sunday Nenagh AFC beat Janesboro 2-1 at Brickfields, Nenagh and were duly propelled to the summit of the Limerick District League Premier Division - this is an extraordinary achievement for a club who elected to leave the North Tipperary & District League just two seasons ago.

The club could have opted to consolidate their position in the Premier Division, but true to the character of the club Nenagh AFC pushed on and embraced the challenge posed. Indeed, Nenagh AFC got off to an encouraging start when beating Regional United at Brickfields on August 21st before piecing together an excellent run of results which featured a one-nil win away to defending league champions Carew Park on October 31st.

Such performances dragged Nenagh AFC to within touching distance of the top before league leaders Janesboro paid a visit to Brickfields last weekend. Sunday’s clash proved to be a real battle; the contest was not only one of skill and individual expression, but it also featured a brilliant combative outlook from both sides.

Nenagh AFC made an encouraging start and moved the ball around smartly before Bryan McGee stabbed home a corner in the fourth minute to present the home side with a precious lead. Janesboro, however, regrouped and finished out the half well. Indeed, ‘Boro dominated a third quarter which featured a two great saves from Nenagh AFC ‘keeper Aaron Savage.

Just when it appeared as if a young Nenagh AFC team were getting worn down by a physically powerful Janesboro side Barry Coffey and Jordan Lewis were introduced as second half substitutes. Soon after Barry Coffey streaked through only to see the Janesboro ‘keeper make a terrific save - undeterred, however, James McGrath swung in the resultant corner in the 71st minute and when ‘Boro failed to make a telling clearance Danny Butler buried a half-volley to present the home side with a 2-0 lead.

Janesboro’s Shane Clarke cracked in a free kick in the sixth minute of second half injury time, but Nenagh AFC held on for what will go down in the annals of the club as an historic win. In many ways the result franked the club’s place in the division and vindicated Nenagh AFC’s decision to leave the North Tipperary & District League.

“We have to do what’s best for our members and for our club. Look, it was a tough decision to leave North Tipp because we had a long affiliation with them. And, it was nothing against anyone. We made that very clear when we made the decision - it was nothing against the committee or against any of the clubs in the league. There are still a few snipes about it, but we have to do what is best for our members,” Nenagh AFC first team manager Dave Rooney told the Tipperary Star. Dave Rooney is joined on the management team by Dearan O’Gorman, Shane O’Gorman and Vinny Savage.

“We needed a better standard of football,” Dave Rooney explained.

“We had won five league titles in-a-row and we felt that we were not getting too much competition in our own league except for (against) Nenagh Celtic in the derbies. It was killing us when we were in the Munster Junior Cup and the FAI Junior Cup. We were just way off the pace and the reason for that was that we were having way too many handy matches in North Tipp. The decision was taken to go into Limerick and it has proven to be an excellent decision. It’s a phenomenal league. We had to start off in the second division; that was a learning curve and this year you can see the intensity in all of the games. They are all decent teams and there are no easy games in the league.”

It was ironic that Nenagh AFC’s two-one win over Janesboro propelled the Tipperary side to the summit of a division which features acclaimed clubs like Pike Rovers, Fairview Rangers, Ballynanty Rovers and Geraldines. In 2012 Nenagh AFC became the first North Tipperary & District League side to make it into the Munster Junior Cup final (a competition inaugurated in 1922), but found themselves beaten by Janesboro at Cooke Park, Tipperary Town. Such experiences forced Nenagh AFC to consider broader horizons as the club suffered from a lack of competition domestically.

Dave Rooney was most obviously pleased with the quality of his side’s performance on Sunday. And, who could blame him?

“An excellent performance - we have been good all year and we are a decent team,” Dave Rooney said.

“We like to get on the ball and we like to play football. It’s a hectic league and it’s a frantic league. There are four or five really good sides, but we would like to think that we play most of the football and we keep a lot of possession in the games. It’s a very tight league and every single point counts so we are delighted with that performance today.”

Despite some encouraging results Dave Rooney explained that his side lacked a little belief in their own ability before Nenagh AFC paid a visit to the storied Pike Rovers and won five-nil with goals from Ryan Gilmartin (two), Dylan Sheehan, Thomas Sheppard and Jordan Lewis all featuring in an excellent performance.

“Top of the league and, yeah, we are happy, but I think the result against Pike (Rovers) was the key,” Dave Rooney explained.

“We were getting close to these teams, but weren’t beating them. We took Pike asunder that day and you could see the belief grow (in the players). Now they are buzzing in training and they believe that they can win this league. If we could win the Limerick league it would be a huge achievement - if it’s not the best it’s the second best league in the country after the AUL league in Dublin,” Rooney added.

Despite joining the Limerick District League the Nenagh AFC club has worked to retain the club’s Tipperary identity. Indeed, the first team squad is dominated by Tipperary players while Moldovan nationals Max Boghiu and Alex Gardas live in Nenagh.

There really is no limit now to what this club can achieve. And, this group of players are worth supporting: in goal Aaron Savage is excellent, Mark McKenna leads the defence, James McGrath is outstanding at midfield, Danny Butler and Thomas Sheppard are lively on the flanks while Ryan Gilmartin is an absolute gem of a player up front.