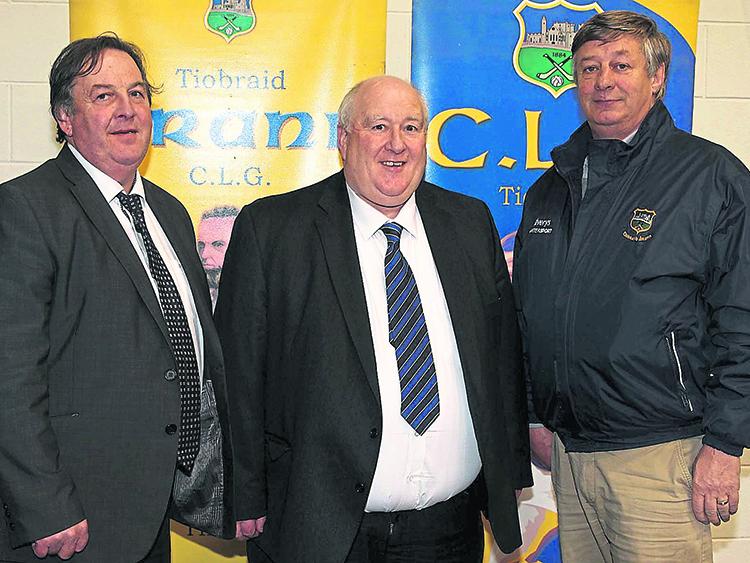 “We can look back at the 2020 vision now - I think that is no longer a pipe dream,” Joe Hannigan told the delegates at Monday night’s Football Board convention.

“We are really looking forward to 2017. We have to build on this success and drive it on. We have the calibre of player in the county to do it. There is an onus on us all to work towards that (vision). That should be our target and we are well on our way to doing it. Everybody working together is the only way forward,” Joe Hannigan said.

In December 2008 County Board chairman Barry O'Brien argued that Tipperary should be winning All-Ireland football titles at the minor, junior, under-21 and senior grades. Indeed, O’Brien outlined a vision that by 2020 the Premier County would win an All-Ireland senior title to mark the centenary of the county’s 1920 victory. O'Brien's declaration was described as a pipe dream at the time, but since then Tipperary have claimed two Munster minor football titles (2011, 2012), an All-Ireland minor football title (2011), two Munster under-21 titles (2010, 2015) and also famously progressed to the 2016 All-Ireland senior football semi-finals. And, Football Board chairman Joe Hannigan made specific reference to that vision on Monday night.

“It was a year when the boys became men and we look forward to driving Tipperary football on now in 2017. We achieved serious recognition. People all around the country are talking about Tipperary and the brand of football that the team played. We need to look to the future, build on the success and back up the work that we have done. We need to drive it on again,” the Shannon Rovers man added.

“If we can build and go on a couple of extra steps on from 2016 that will put us within touching distance of an All-Ireland,” Joe Hannigan added.

The County Football Board chairman indicated that the targets for 2017 were to earn promotion from division three of the National Football League and to win a Munster senior football title.

Joe Hannigan thanked his colleagues on the County Football Board and the County Board for their support. He praised the players for the “woeful amount of work” that they got through and the respective management teams for all of their work. Joe Hannigan said that the senior set-up featured “top class people there” who did “great work”. Hannigan also made specific reference to Tommy Toomey and the contribution he made to Tipperary football before joining Peter Creedon’s Laois senior football management team.

“I want to wish Tommy well and thank him very much for all of the work he has done for Tipperary football,” Joe Hannigan said.

“It is very important to keep the show on the road . . . if you don’t have calves you won’t have cows,” Joe Hannigan said with reference to the importance of ensuring that good structures are in place to support the development squads.

In 2016 the minor hurling management team led by Liam Cahill insisted that they would not entertain dual players. At Monday night’s Football Board convention, however, Joe Hannigan addressed the issue by requesting that “we come up with an accommodation”.

“To achieve success in hurling and football in a county there is always going to be issues, but the only way forward is for everyone to work together,” Joe Hannigan said.

“If a player has an interest in playing both (at minor level) he should be allowed to play both - that is an issue that we have to have a look at.”

During Monday night’s County Football Board convention secretary Hugh Coghlan presented a wide-ranging report on what he described as “a great season” for Tipperary football. The delegates in attendance voted for the top table of chairman Joe Hannigan, vice-chairman Michael Byrnes and secretary Hugh Coghlan to remain in situ. Since Tommy Fitzgerald made the decision to step down from the role of public relations officer Enda O’Sullivan (Nenagh Éire Óg) was nominated and seconded as the new Football Board PRO. O’Sullivan’s name will go forward as a recommendation to the County Board for ratification.

Speaking at Monday night’s convention Football Board vice-chairman Michael Byrnes said that he wanted to “compliment” Football Board chairman Joe Hannigan on his work on behalf of Tipperary football.

“His heart is in everything he does for Tipperary football. He does put in a fierce amount of work,” Michael Byrnes said before adding that “the support for football in the county at the moment is tremendous and we need to tap into that. The players are there and with the help of everyone we can only go forward from here”.

“In 2016 Tipperary went from boys to men and went from being respected to being admired the length and breadth of the country,” County Board chairman Michael Bourke said in his address to the convention before asserting that the success of 2016 was down to “long, hard years of work”.

“The challenge now is to keep it going,” Michael Bourke added.

“There is a plan in place to drive Tipperary football forward and we all have a responsibility to buy into that plan and drive it forward. The good will is there and we have to tap into it,” Mr Bourke added.

At Monday night’s County Football Board convention chairman Joe Hannigan thanked the Friends of Tipperary Football for the “massive, massive part they played in the progression of Tipp football”.

The 2017 membership scheme for the Friends of Tipperary Football is up and running and tickets, priced at just €20 each, can be purchased from any committee member or the divisional coordinators; namely Kevin Barron (West), Trish Gavin (Mid), Aidan McNamara (South) and Joe Hannigan (North). Those interested can also join online at the following link: http://www.friendsoftipperaryfootball.com.

A REPRIEVE FOR NORTH TIPP

Last week it appeared as if North Tipperary would not be represented in the county under-21A hurling championship since the clubs involved at the semi-final stage of their divisional competition opted not to nominate a club to participate in last Sunday’s county semi-final against Carrick Swan. In an about turn of staggering proportions the under-21A county final, which now features Thurles Sarsfields, will not be played this forthcoming weekend. Instead the North Tipperary under-21A hurling championship final will take place on Saturday next, December 3rd in Templederry between Toomevara and Kilruane MacDonagh’s (throw-in 1.30pm) while the winner of that clash will face Carrick Swan in a county under-21A hurling semi-final on Sunday, December 4th.

In the Munster junior B hurling championship semi-final hosted by the Killeedy club in Limerick on Sunday Upperchurch-Drombane beat Murroe-Boher (1-12 to 2-8) to book their place in the provincial final. Meanwhile on Sunday, December 4th Tipperary’s junior B football champions Arravale Rovers will face Oola in Knockaderry, Limerick at 2.30pm in a provincial quarter-final.

Tipperary will not participate in the 2017 Munster senior hurling League which is due to commence in early January for the second consecutive year - Michael Ryan’s senior hurlers will play a series of challenge matches in preparation for the Allianz National Hurling League campaign opener against Dublin on February 11th. One of those games will be against Antrim, a game which will be hosted in honour of the late Fr Alec Reid.