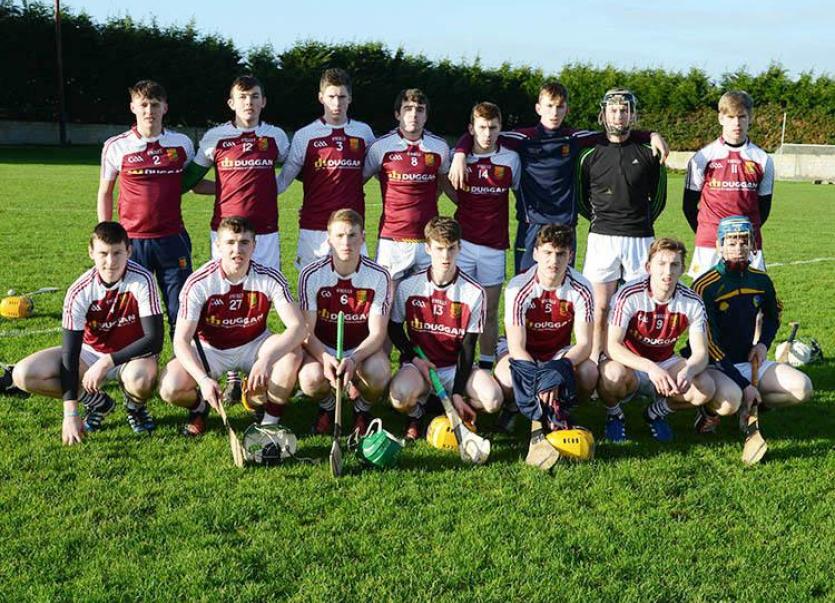 The Our Lady's Templemore team which beat Thurles CBS in the quarter-finals.

The hurling people of Mid Tipperary are preparing this week to descend on Páirc na nGael in Limerick to support Our Lady's Templemore in their valiant quest to win the Dr Harty Cup back for the first time since 1978 - Our Lady’s face St Colman’s Fermoy in the provincial senior A colleges final on Saturday, February 18th at 2pm.

Our Lady’s, however, appear well-equipped to mount a huge challenge against final favourites St Colman’s on Saturday - in the first round Our Lady’s beat St Flannan’s (1-23 to 1-12) before seeing off Árdscoil Uí Urmaltaigh, Bandon with forty-two points to spare (6-27 to 0-3). In the quarter-finals Templemore got the better of Thurles CBS (3-14 to 1-10) before seeing off a resolute Nenagh CBS team in the last four (1-15 to 0-14).

Interestingly 13 years had passed since St Colman’s last won the Dean Ryan Cup - ominously the Fermoy college won both the Dean Ryan and Harty Cups in 2003. Boarding students were phased out at St Colman’s in 2003 and Fermoy have not progressed to a Harty Cup final since even though the Cork school had placed three titles back-to-back from 2001 to 2003. Indeed, since then St Colman’s have had to change how they do their business, utterly. In 2002, for example, St Colman’s beat Our Lady’s Templemore 2-18 to 0-6 with a team featuring Limerick captain Maurice O’Brien, Waterford’s Stephen Molumphy and, of course, Limerick star Andrew O’Shaughnessy.

Now St Colman’s have a team of eleven teachers in the school working to develop the talent which passes through the doors. The team is managed by Flannan Cleary and the management team also features Bill O’Flynn, Noel Crowley, Shane Roche and Thurles man Michael Collins.

CBS Midleton won the 2014 and 2015 Dean Ryan Cups which duly installed the east Cork school as favourites to win the Dr Harty Cup outright. St Colman’s, however, had other ideas and a brace of wins over CBS Midleton suggests that this Fermoy team is one of real pedigree. CBS Midleton, of course, also dethroned Árdscoil Rís, the defending champions, in the last eight.

Full-forward Brian Roche fired home the key goal against CBS Midleton while Barry Murphy represents a powerful presence at centre-forward. Up front Jamie Sheehan is also worth keeping a close eye on. Centre-back Niall O’Leary is a key influence on the St Colman’s defence, Conleth Ryan and Diarmuid Lenihan are also outstanding players while goalkeeper Eoin Davis is destined for great things.

Don't miss this week's six-page preview of the 2017 Dr Harty Cup final in the Tipperary Star which features interviews with Our Lady's captain Paddy Cadell, Templemore joint-managers Tom Byrnes and Noel Fogarty. Noel Dundon chats with St Colman's selector and Thurles man Michael Collins while Toomevara's Benny Dunne chats to the Tipperary Star about his memories of winning the Dr Harty Cup with St Flannan's in 1999.

ROUTES TO THE FINAL