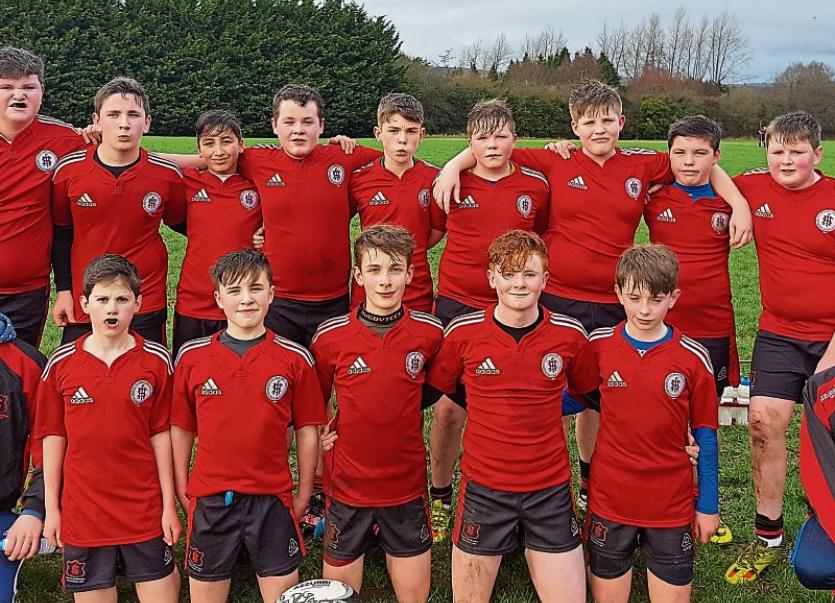 Clonmel High School  U15 rugby team took on Ardscoil na Mara, Tramore  in the Cleary Cup   at home  and dominated early on despite an injury to captain Oran Ryan.

The men in red and black kept the pressure on due to great carries from Brandon Delicato and Conor Neville and great kicking out of hand by Cathal Deely.

Liam Ryan and Luke Manning tackled well when the High School were on the backfoot.

Aidan Hickey opened up space for outside channels with good passing and great footwork.

The majority of scores came through Brandon Delicato and Cathal Deely who were superb on the day.

Ardscoil na Mara used their replacements wisely to score a few consolation tries but it was to no avail. High School showed great talent and character throughout and look forward to their final pool game with Waterpark College.

High School 1st Year teams travelled to St. Munchins. The A game was dominated in the early part by a strong Munchin’s side, who scored four tries.

However  High School came back with great heart and determination, and scored four tries of their own through Rian McCormack and Lekan Oki.

Munchins replied with another three tries. Lekan Oki ran in the next try for the High School. Indeed he was to finish with a total of four tries.

Munchins scored another two tries with some great offloading and back play.

On the final play of the game, Darragh McVicker scored a try to cap a good, encouraging performance by the High School.

Some great counter rucking was shown by Killian O’Keeffe especially in the second half. Adam Cunningham also carried strongly throughout.

In the B game, it was clear from the start that High School had a much stronger side.

A try was scored within the first three minutes by High School's  full back and captain Harley Joy Horan.

Realising they were up against a much stronger side, St. Munchins brought many of their A players  in response to the High School's amazing defence.  However, this made little difference as the High School continued to score another four exceptional tries with the help of Fionn Hallinan and Yiber Sadiku.

St. Munchins,  managed to squeeze in and convert a score  before the final whistle. It was a great show of character by both teams considering the poor weather conditions.