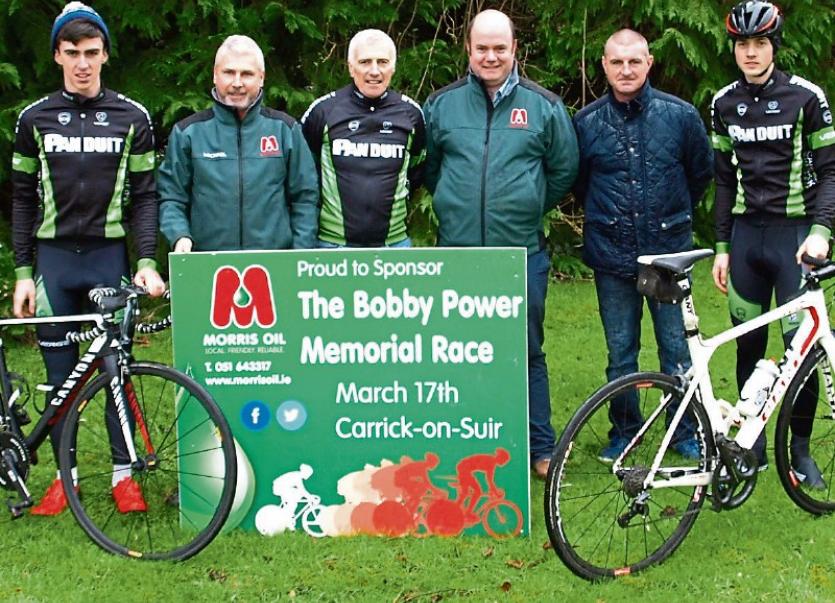 This year’s circuit will be based on the village of Clonea-Power, many thanks to the local community for their cooperation with this event.

The circuit, just short of 20 kilometres, takes the riders from Clonea-Power on the R678 to Lowry Bridge, left on to the R677 towards Carrick-on-Suir past Crehana and then left on to the R676 Dungarvan road before the final left turn at Ballyhest Cross for the short uphill finish.

The A4 riders will complete 4 laps (80 kms) for the Landy Cup, the A3s five laps (100 kms) for the Tommy Sheehan Memorial and the A1s, A2s six laps (120 kms) for the Bobby Power Memorial.  Details of the route can be viewed here

This year’s Bobby Power Memorial is again kindly sponsored by local company Morris Oil, who have a proud tradition of supporting local clubs and charities.

Eoin O’Brien, Morris Oil’s Sales and Marketing Manager, stated that “Morris Oil are delighted to sponsor the Bobby Power Memorial which honours one of Carrick’s true cycling and sporting legends.  We wish the club every success with the 17th March races and are glad to play our part in what should be a great day’s racing.”

.There will be three races as follows:

Entry to the races is by pre-entry only here with entry open from 28th February to 14th March.

Each race is limited to 80 riders who must hold a valid 2017 licence, entry fee is €20 and there are no entries on the day or one-day licences.

Those pre-entered are required to sign-on at the race HQ located at the Community Hall in Clonea-Power – eircode E32 X578 with the sign-on open from 09:30 to 10:30.  Please note that unfortunately, owing to ongoing building works, there will be no showers available on the day.

Bobby started in his career with Carrick Wheelers in his early teens and served the club in many capacities ranging from racing cyclist to coach to PRO to Chairman.

It is probably as a racing cyclist that Bobby is best remembered, a prolific winner - Bobby won some 106 open races in Ireland, six Rás stages and finished second overall in the 1978 Rás.

It is fair to say that Bobby’s name is synonymous with cycle racing throughout Ireland.

On finishing his racing days Bobby turned his attention to other facets of cycling, among them catering for the younger generation through initiatives such as the annual Faugheen league for youths.

Tommy served Carrick Wheelers in many capacities and also served cycling at provincial and national level, including as President of the National Cycling Association in the 1970s.

He firmly believed that no one person was bigger than the club and in the importance of catering for youth riders – Tommy started a youth league c. 1967 through which riders such as Bobby Power, Kevin Power, Larry Power, Paddy Power, Joe Cashin, Billy Kennedy etc. emerged, such foresight resulting in the club continuing to prosper some sixty years later.

The Landy Cup was presented to Carrick Wheelers by club member Eamonn Landy to commemorate his father William (1927 – 1995).

William was involved with many sporting clubs and organisations in Carrick-on-Suir, driven by his firm belief that activities and facilities should be provided for youths as a means of keeping them from delinquency.  The handball alley located at Davin Park is one of the fruits of William’s campaigning for facilities to cater for the youth.