Schoolgirls soccer continues to go from strength to strength in Tipp 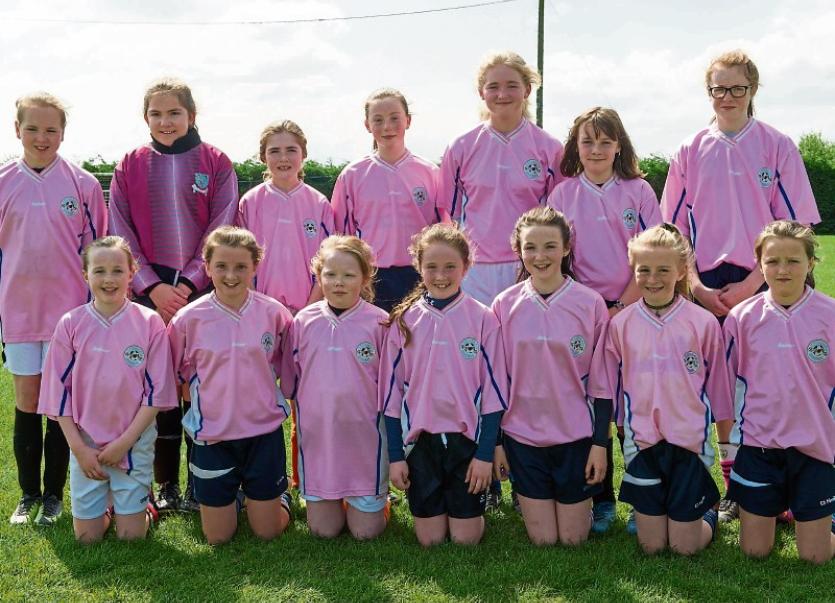 The annual TSSDL Schoolgirls Festival of Football had its second run out at the weekend, and the number of girls playing has shown another huge increase on last year’s figures, with some fantastic games on show in front of very large crowds at St Kevin’s pitch in Newhill on Sunday and Monday.

And among those watching at the weekend was Irish under 15 manager Lorraine Counihan, with a large smattering of Munster players and potential Irish internationals on show. She along with the other spectators were highly entertained as well as being engrossed by the games, especially the three Cup final, two of which were settled by a single goal victory, and the third requiring a penalty shoot out to settle matters. 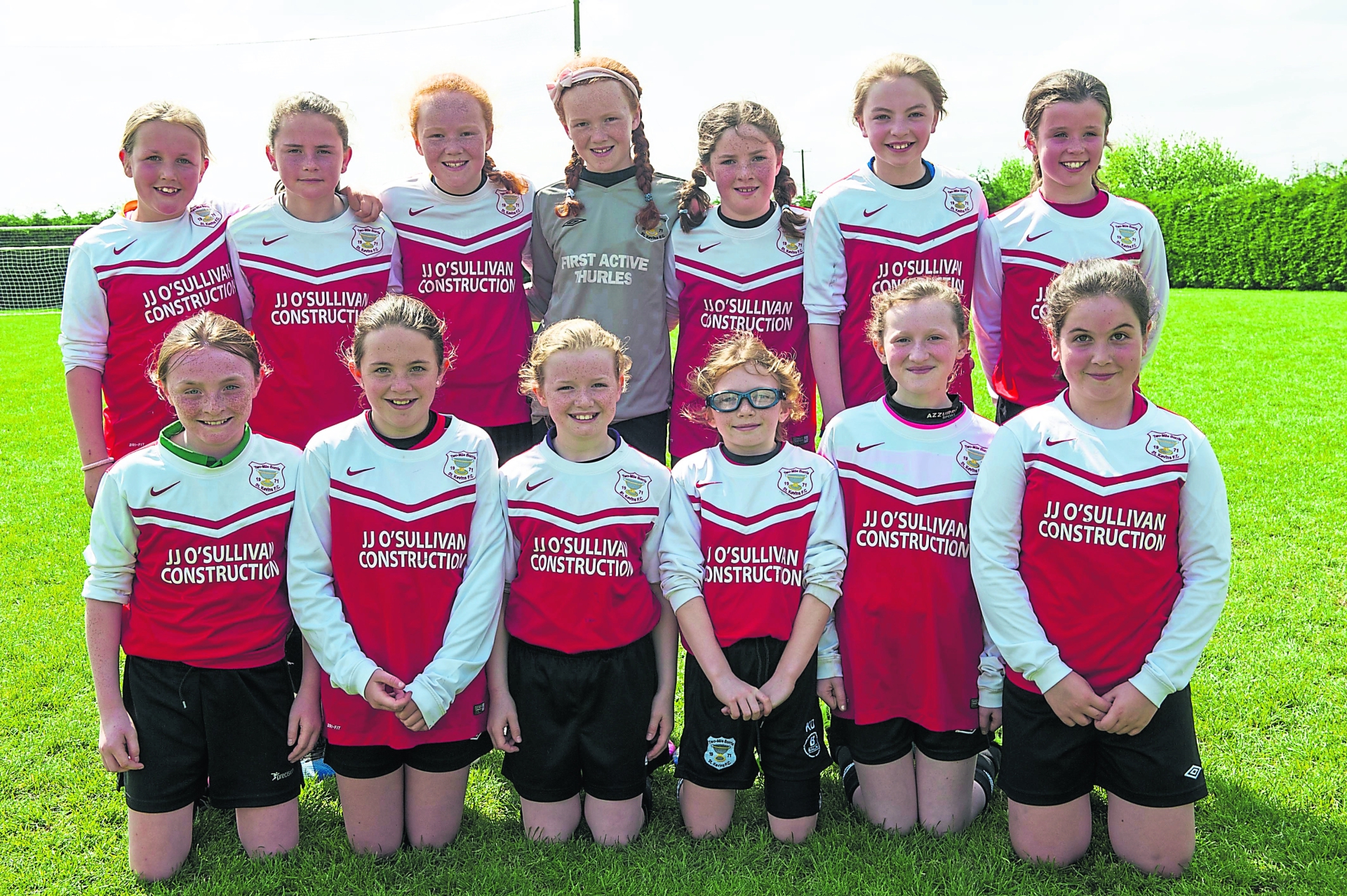 The various semi-finals were played on Sunday, and unfortunately the youngest players on show had to suffer the worst of the weather at the weekend with the u12 Cup and Shield finals taking place in very wet and windy conditions. In the Cup semi-finals it was the two favourites who came through with league leaders Cashel Town overcoming Tipperary Town and Peake Villa proving too strong for Cahir Park. In the Shield section, home side St Kevin’s were the better in a game against Cashel Town’s second team, while Killenaule Moyglass beat a very tough Kilburn Celtic side to advance to the final.

In the U14 section, FAI Cup semi-finalists Cashel Town showed why they are the league champions when they dominated proceedings against Kilburn, eventually qualifying for a final berth, where they were joined by Killenaule/Moyglass’ girls who beat Cahir Park. In the Shield, Killenaule’s second team went down by the odd goal in five against St Kevin’s, who were joined in the final by Tipperary Town who had a close win over a good Peake Villa side.

The last games of the day on Sunday were lucky to see the best of the weather, and this benefitted the older girls who put on some very good displays before Clerihan finally got the better of Kilburn Celtic, and Cashel Town came from behind to record a good victory over Tipperary Town. In the Shield Competition, Cahir Park had a surprise win over a fancied Peake Villa side, while in the second semi-final, Killenaule Moyglass were too strong for the home girls, to ensure a good mix of clubs had some skin in the game when it came to finals day on Monday. 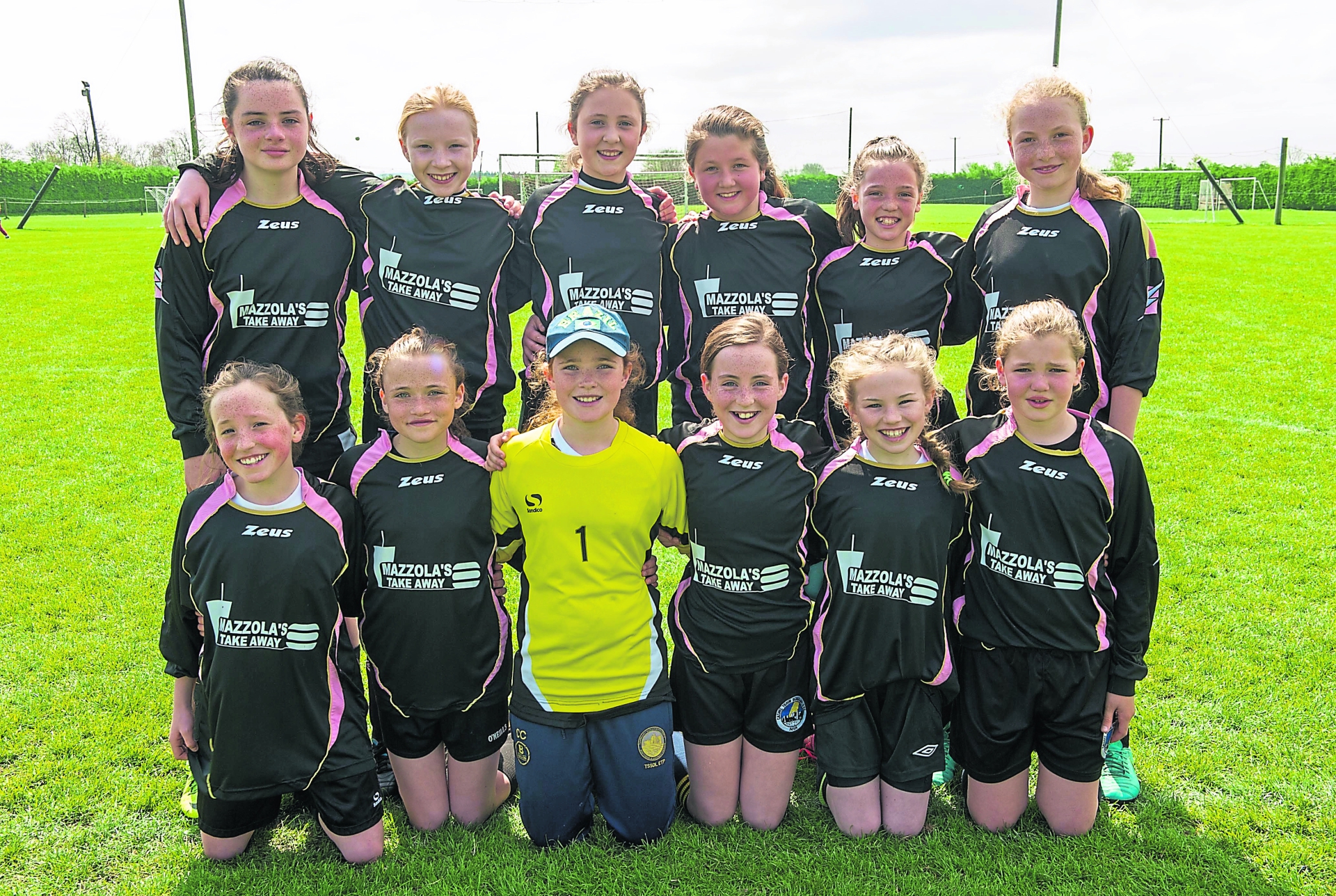 Monday morning opened up in glorious sunshine and this encouraged a large crowd to Newhill to support the seven different clubs who had teams in finals on the day. The action kicked off at 11 am, and right from the off the crowds were treated to some great games.

The first game up was the Shield final between home team St Kevin’s and their opponents from Killenaule. The Kevin’s girls would have been favourites going into the game but their opponents were in no mood to roll over and hand them the win, which made for a hugely entertaining game. Both sides had chances with defences and goalkeepers scrambling at both ends of the pitch. It looked that this game would go scoreless all the way to the end, but just before the whistle was blown, St Kevin’s won a penalty which was despatched to the net by Caitlyn Shelly to give the home side the first silverware of the day.

The u12 Cup final was contested between the top two in this year’s u12 league, and promised to be a ding dong battle, after these teams had played a scoreless draw in a recent league game. Table toppers Cashel started the fastest and dominated early possession, opening the scoring when star player Michaela Lawrence beat the Peake defensive line and finished well to the corner. Alas for the Cashel girls, they were unable to build on the lead, and despite having the most of the possession were caught by a breakaway goal when Maria Ralph skinned the defence before sliding home for the Villa. The game continued in similar fashion with Cashel coming close to regaining the lead in the second half after a Grace Fitzpatrick shot came back off the cross bar. That said, Villa had a great chance to wrap it up in extra time but Lauryn O Flynn made a great last ditch tackle to bring the game to penalties. It was the Thurles side that kept the nerve best from the spot though, when Chloe Shorley, Emma Shelly and Maria Ralph scored, to win the Cup eventually on a three goal to two score line. 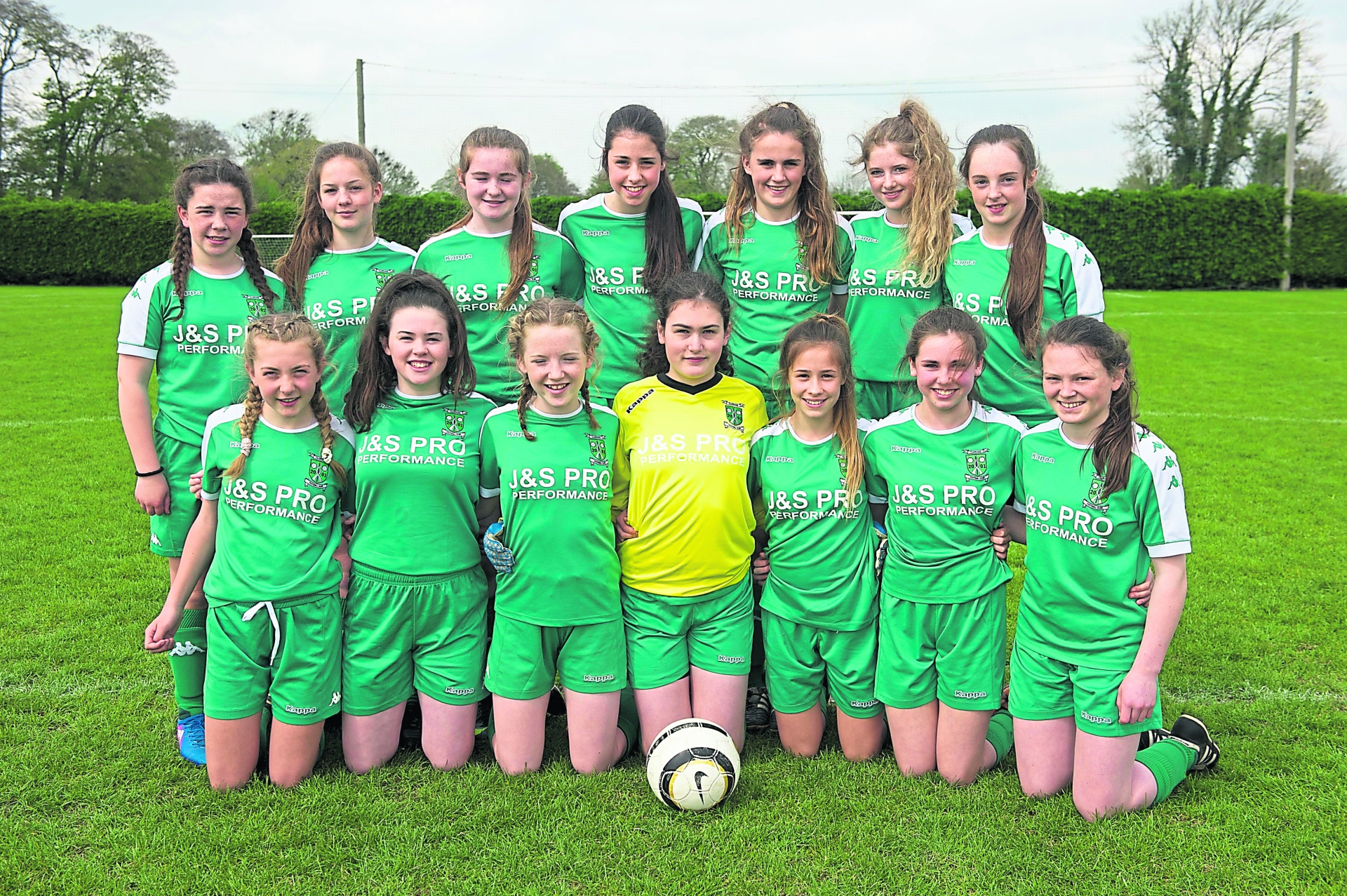 The third final of the day produced the third different club winner of the day when Tipperary Town took the Shield final after a convincing win against home side St Kevin’s. The home girls had a number of players who also took part in the earlier Shield final and this showed as the fresher Tipperary Town girls were faster to the mark in the early stages. They opened up a three goal lead in the first half with goals from Ellie Peters, Hannah Quinn and Megan Heffernan, before Emma O Sullivan pulled a goal back for the home girls. It wasn’t the start of a comeback however as the Tipperary Town side added two more in the second period through Caoimhe Hickey and Jenny Ryan to run out easy winners in the end.

Cashel Town went into their second final of the day the warmest of favourites after going through the domestic season so far unbeaten, but Killenaule were never going to give them a free run and shocked the Cashel girls mid-way through the first half when Eva Hogan poked home after a scramble in the area to give the under dogs the lead. This focused the minds of the Cashel girls and they upped the tempo. Ten minutes before the break they were awarded a free kick just inside the Killenaule half, and when Emer Mc Carthy delivered into the area, Ella O Dwyer was quickest to react and poke home the equaliser. Settling now to their task, Cashel began to dominated and took the lead just before half time when Mc Carthy again set up Allessia Mazzola to score and give her side a lead at the break. Early in the second half Cashel made it three when Katy Sherlock powered home from six yards out, but instead of kicking on, the Killenaule girls finished the stronger and brought the game back to three goals to two when Joanne Hickey got a second goal for them. In the end though, the experience of a long year was enough to drag a depleted Cashel team over the line, and they added the Cup to the league title they won a fortnight ago. 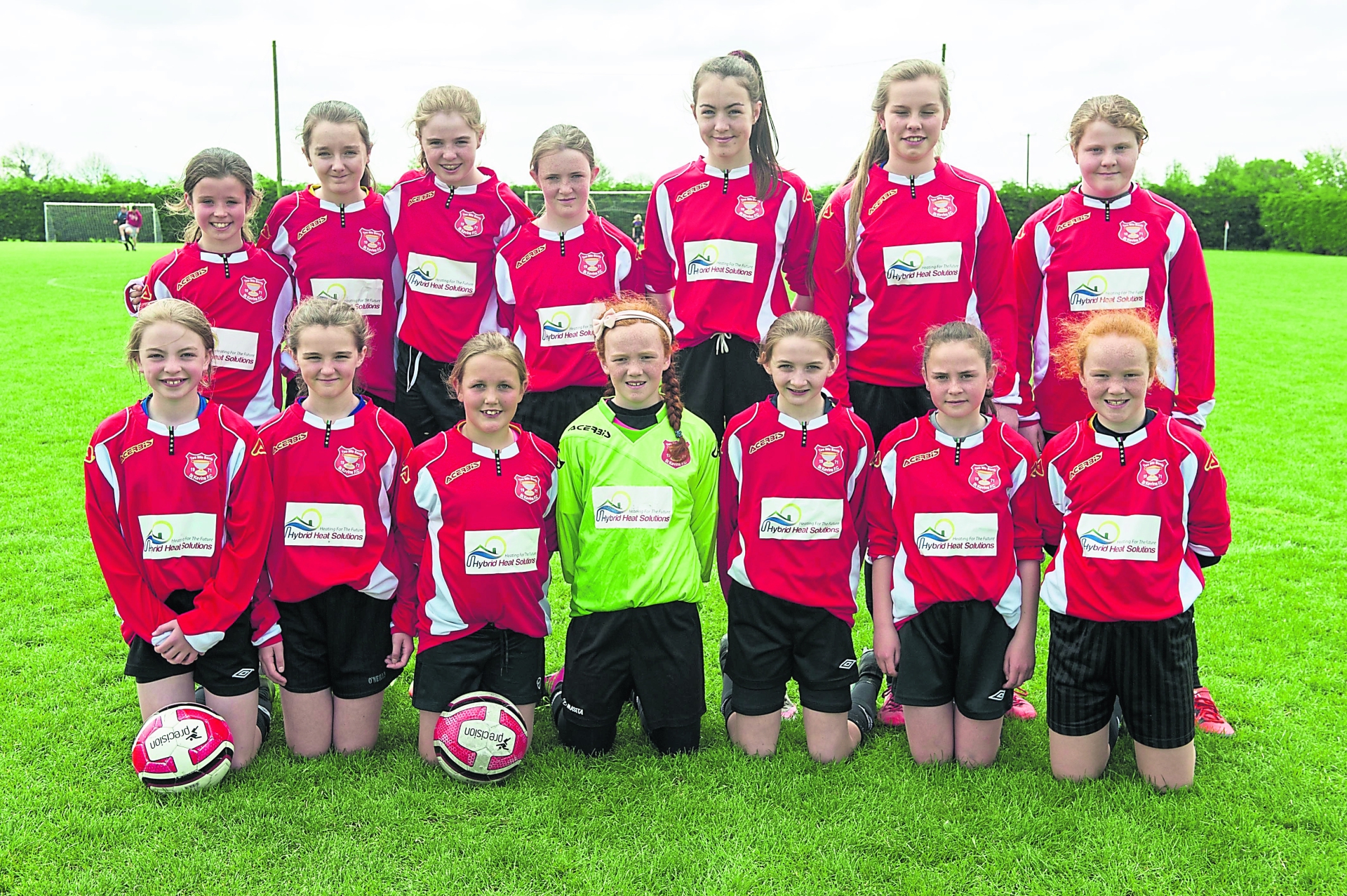 Fresh from defeat in the u14 Cup Final, a number of Killenaule girls were back on the pitch straight away for the u16 Shield decider, and they were determined not to suffer the same fate two games in a row. This time they dominated the game from start to finish and really gave the Cahir girls no chance to play their way into the game, with five first half goals coming from a Leah Coen brace, Marion Gillman and Joanne Hickey’s second finals goal of the day. Gillman struck again early in the second half to ensure there would be no fightback, and although Rosanna Kiely got a consolation goal back for Cahir, two more Killenaule goals by Eimear Boland left the final score an easy seven goals to one victory.

The final game of the day rounded off proceedings with a very tough, very tactical game from two teams who have been neck and neck with each other for a number of years now, and saw Clerihan finally come out on top by a single goal. The fourth game this year between the teams and after sharing a win each and a draw earlier in league battles, once again there was no more than a single goal between the teams. That goal came ten minutes before the end of the first half, when what looked like an innocuous shot by Aoibheann Foley took a wicked spin and bounced over the out stretched arm of the Cashel keeper. Clerihan had a chance to increase the lead in the second half when they were awarded a penalty kick, but Juliet Delahunty in the Cashel goal made a superb double save to keep her side in the game. Alas it was to no avail as they were unable to break down the tough Clerihan defence and they held out for a single goal win. 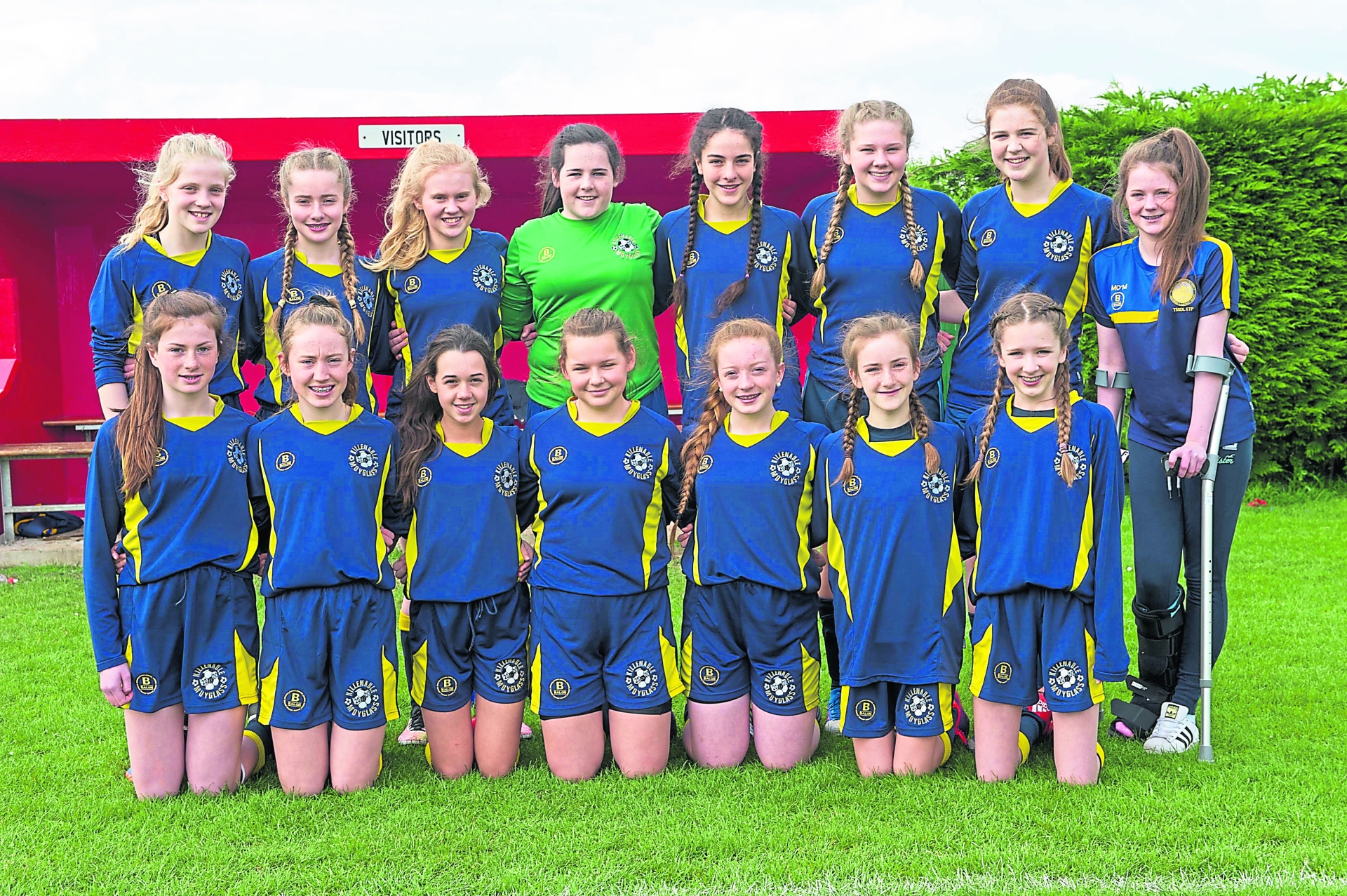 The remarkable aspect of the finals day, that the six games produced six different winners, showing the wealth and spread of talent across the entirety of the girls clubs in South Tipperary. While the main finals were going on, there was also an u10 blitz in action on Monday, and this showcased the next generation of players. All in all, this was a great showpiece and the game is crying out for other clubs to give young girls a chance to show off their skills and commitment. Well done to St Kevins football club for hosting the event, and everyone involved in organising it.