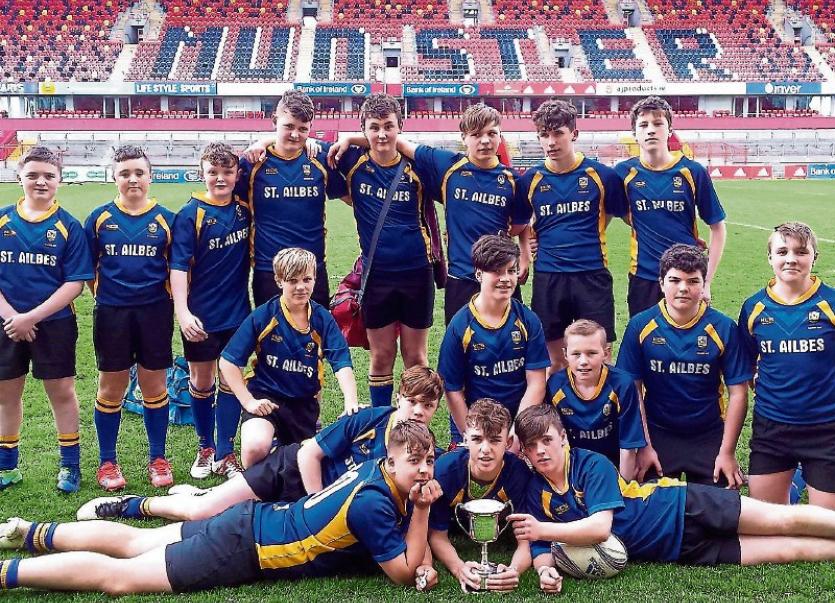 “St. Ailbe’s secured their place at finals day in Thomond Park on April 27th by qualifying from the Tipperary conference at the end of the qualifying period,” explained Principal Mr. Ruaidhri Devitt.

“Once qualified, St. Ailbe’s continued on to face opposition from qualified teams from the Limerick and Clare conferences making up the rest of the North Munster Division.”

In the finals, St. Ailbe’s produced a clean sweep of wins across all four games on the day.

“The team showed great character by remaining calm and coming from behind on two occasions to secure victories. They showed great resilience and grit in defence, managing many turn-overs in tackles while showing great ability to break defensive lines in attack,” added Principal Devitt.

Saint Ailbe’s road to success in North Munster schools rugby began in a campaign that started in October 2016 and stretched across seven months, ending on April 27, 2017 in Thomond Park. The competition was organised by the Munster branch and St. Ailbe’s competed in the Tipperary conference of the competition facing other schools from surrounding areas. The campaign consisted of four match days in blitz format starting in October, where each team played four matches per game day.

St. Ailbe’s squad consisted of 20 players ranging across first, second and third years who engaged in all aspects of the rugby programme in the school. Each player committed themselves to two training sessions per week with the intention to promote the skills required to play rugby while improving overall general fitness.

“I’d like to pass on my heartiest of congratulations to our rugby players,” added Principal Devitt.