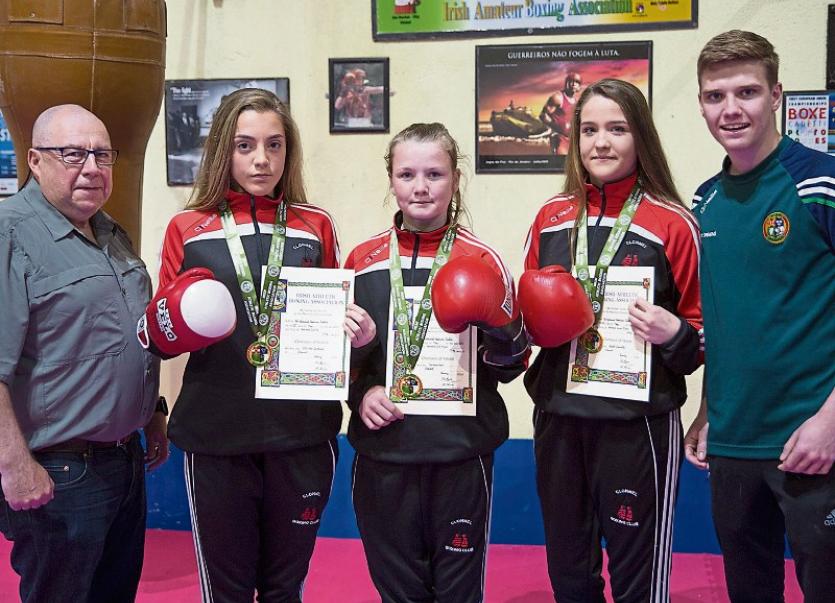 It was a perfect three out of three for Clonmel Boxing Club's girls at last weekend's National Girls Championships in Dublin, where they returned home with three gold medals.

In her first competitive year in boxing, Courtney Joyce faced Hannah McCann, St. Bridget's, Offaly in the final in what was an exciting contest.

Courtney dominated the first two rounds, with the last round being close, and she received a well-deserved unanimous 5-0 decision to take the title.

Ellie Mae Gartland was up against Charlie Horgan, Ryston in her final but the Kildare girl proved to be no match for the Clonmel boxer, with Ellie taking a convincing unanimous 5-0 victory to claim her first Irish title.

Ellie beat Tigernach Maguire, Immaculata Boxing Club 5-0 in the semi final and Rebecca Touhy, Esker in the quarter-final by the same margin.

Rachel produced the performance of a lifetime to take a well-deserved decision against her Mayo opponent.

In the semi final she beat Shantelle Ritchie, from the Gilford club on a split decision.

All three girls have boxing connections in the family. Courtney Joyce's uncle is David Joyce, who won numerous Irish titles as a schoolboy with the club.

CCTV on the way for two Clonmel estates