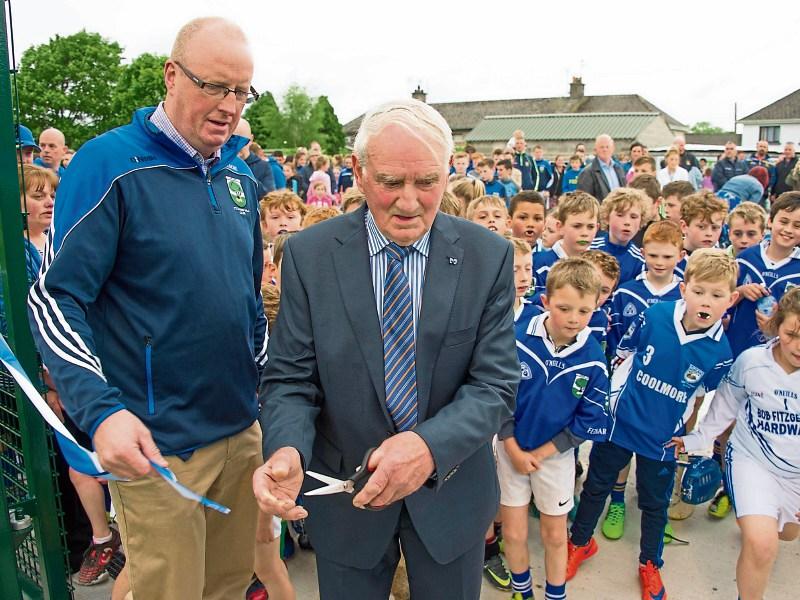 Fethard GAA may be steeped in history but on Sunday, June 4, it also showed it is firmly focused on the future, with the official opening the new club’s much-needed all-weather Astro Turf pitch, performed by life-long member Jimmy O’Shea.

After a great evening of entertaining games played by our young Juveniles, club chairman John Hurley opened the proceedings with some well-chosen words and a huge debt of gratitude to all who made this marvellous project possible – from his committee, our Lotto team and the people who so generously support it. The event was well supported by hundreds of locals, including players, past and present, representative of South and County GAA Boards and the local press.

John went on to speak of the contractors, Premier Pitches, and thanked them for their professionalism and for completing a supremely well-finished pitch and enclosure that will be enjoyed by not only our own members but by every child attending our local schools who will have full access to the facilities. John also thanked our sponsors Coolmore for their on-going support, both with this project and for always being supportive to the club over the past 25 years. Going forward, John spoke of the club’s commitment to continued development of their facilities for the use and benefit of all in Fethard.

Canon Tom Breen, a keen sports enthusiast, complemented the pitch and the great community spirit that is a tribute to the people of Fethard. Canon Breen blessed the pitch and all that may play on it. To perform the official opening and cutting of the ribbon, chairman John Hurley explained, “We wanted someone from the locality to cut the ribbon and who better than a man who has given so much to Fethard GAA and is still involved to this present day, than Jimmy O’Shea.”

Jimmy, not going to be outdone, had a few well-chosen words himself, and then followed on with his official duties and declared the pitch now open. Straightaway our youngest members played a short game as the very first people to play on this new and valued surface.

The club would like to thank, everyone who turned up on the day and all those that have helped make this great facility possible.

Tipperary to vote in favour of new structure at GAA Congress