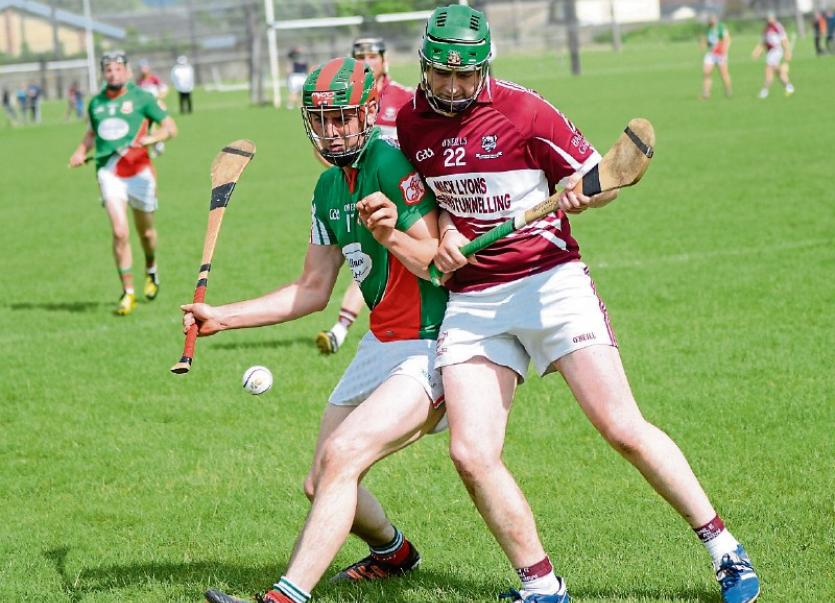 In the lead-up to the game followers of both sides were somewhat anxious about what defeat might mean.

Ballingarry had been doing poorly in the lower section of the county championship and results so far in their group indicate that a relegation play-off might be in the offing.

In the Dan Breen Cup Mullinahone had started with a defeat by Eire Og Annacarty but a win second day out against Burgess had reignited some hopes.

Both sides want to do well in the South championship and a win or defeat against local opposition could have a major effect on the club’s season.

Ballingarry’s position seemed the more perilous, as in recent years Mullinahone had won the majority of their senior hurling championship games with their neighbours.  On Sunday both teams had selection problems due to exams.

While Mullinahone seemed the worst  affected, Ballingarry started without the talented Dylan Walsh. County senior panellist Sean Curran was ruled out for Mullinahone because of illness and his loss, and that of his brother Alan, robbed the side of some of its attacking strength.

A strong wind blew towards the South Tipp GAA Centre and Mullinahone had first use of that wind.

However Ballingarry  exploded into action within the first five minutes, scoring three quick points and then a goal.

In the next nine minutes the sides shared six points, as Mullinahone finally opened their account. Spectators could see that Mullinahone were under pressure around the middle of the field, where Ballingarry's  Padraig Hayes and Daniel Fennelly were very much on top.

However Mullinahone came back with five unanswered points between the 15th and 26th minutes, although they were unable to draw level, nor could they score a goal to undo the damage of Ballingarry’s early goal.

In the run-up to half time two points increased the Ballingarry lead, which had been down to a point, the second a fine effort into the wind by Jack Fennelly.

In added time Micheal Dunne pointed a free to cut the Ballingarry lead to two points when referee Noel Congrave blew the half time whistle, leaving Ballingarry ahead by 1-8 to 0-9..

Mullinahone were now up against it.  Their attack, apart from Micheál Dunne, was being tied up by the Ballingarry backs and Ballingarry's forwards and midfield could now shoot points from distance with the aid of the strong wind.

In the second half Graham Horan pointed for Mullinahone, but Eamon Tuohy replied. Mullinahone pointed a free but Ian Ivors replied from distance.

This was very much the pattern of the second half.  Mullinahone struggled for scores and as soon as they got one Ballingarry hit back to cancel it out.  After 11 minutes, Cathal Horan made his first appearance of the year for Mullinahone and Dylan Walsh was sprung for Ballingarry.  Niall Curran pointed for Mullinahone.

Perhaps the chance of a goal was on, but Eamon Tuohy immediately replied for Ballingarry.

After 18 minutes of the second half, Ballingarry were three points ahead and then Horan and Hayes exchanged scores. Hayes’ point was from a free from a very long distance.

Two minutes later came an incident that helped to decide the game, when Ballingarry were three points in front.  A ball dropped into their area and was knocked out, but ended up in the Ballingarry net.  The green flag was raised, but after consultation with the umpires the goal was disallowed.

Ballingarry came down field for a point, which Micheál Dunne pulled back from a free.  In the next minute Mullinahone missed a goal-scoring opportunity.  Dunne pointed a free.  Mullinahone attacked and as one of the forwards raced in on goal he lost the ball, which was swept out  and down to the lethal Dylan Walsh, who smashed to the Mullinahone net.

This score finally broke Mullinahone, who were outscored by four points to one in the last five minutes.

These points could yet prove vital to Ballingarry before the South Championship reaches the knockout stages.

The second first round game between Carrick Swan and Killenaule takes place on this Wednesday evening.