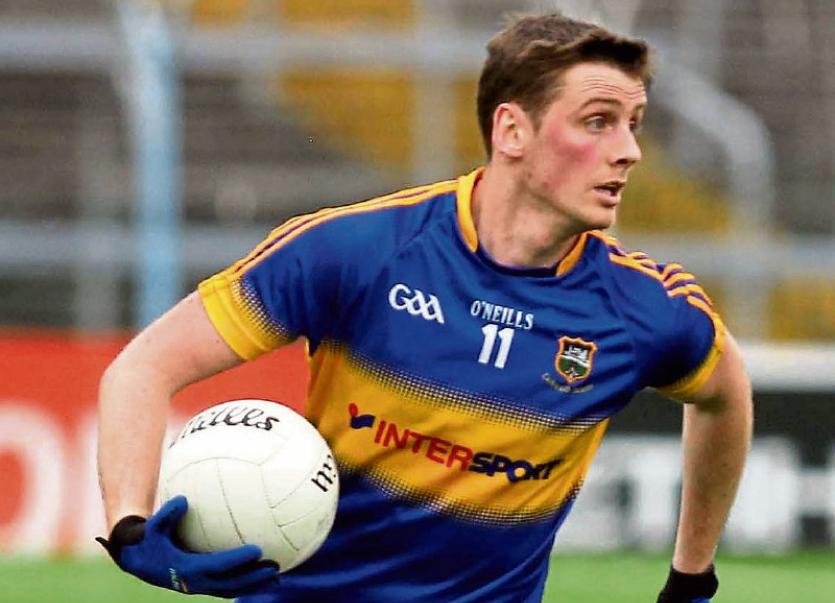 Ballyporeen booked their place in the knockout stages of the county senior football championship with a narrow victory over Cahir at Ardfinnan on Saturday evening, thanks in the most part to an outstanding display of points scoring by Conor Sweeney.

Sweeney who just seven days earlier had won the 'Man of the Match' award against Cork in the Munster SFC semi-final, reproduced that superb form to kick a total of 13 points which was just about good enough to deny a seriously depleted Cahir side who needed to win.

The result for Ballyporeen, managed by Declan Molan, sees them finish runners-up in the group to Clonmel Commercials, thus guaranteeing themselves a place in the last 12 when the knockout stages resume.

Cahir, a side who were desperately unlucky to lose a county final in a replay just three years ago, must now face into a play-off with Fethard, Drom/Inch and Ardfinnan to decide who will drop back to intermediate football for next year. Hard times indeed for a club who has lost so many players in such a short period and in the run-up to this game were unable to call on 17 players for one reason or another.

Regardless, Cahir took the game to their opponents and were 0-3 to 0-0 to the good inside five minutes with frees from Mikey O’Connor and Dean Lonergan, and another from play from Ryan Murphy whose goal-bound shot was superbly deflected over by Ballyporeen’s Eoin Morrissey.

Benny Hickey’s side should have capitalised further when the going was good, but two close-in kickable frees were missed and Ballyporeen were fortunate to be just three down after that initial period of Cahir dominance.

Soon Ballyporeen settled and five of the next six points went their way as Conor Sweeney looked capable of scoring each time he handled the ball. The full-forward kicked three from play, one from a free and assisted Rian O’Callaghan to fire over a lovely point from play from 30 metres after John Martin had begun the build up.

A nice Cahir cross-field move linking Niall McKenna and Conor Casey set up Dean Lonergan to level the game at 0-5 apiece after 19 minutes, Lonergan one of the Cahir’s most dangerous forwards in possession.

The last 10 minutes of the opening half, like the first 10 minutes, were dominated by Cahir and they outscored Ballyporeen by 4-2 in the lead-up to the interval. After Conor Sweeney had edged his side in front, Cahir responded with frees by Mikey O’Connor and Johnny McMahon before finishing the half with two from play. The first of these came at the end of a move involving Mikey O’Connor and the hard-working Ian Flannery with McMahon kicking a point with his back to goal. The concluding point of the first half was perhaps the point of the game. A move deep in defence initiated by Oisin Moloney saw Cahir players interlink the length of the field before Niall McKenna slotted over for a 0-9 to 0-7 half-time lead.

Ballyporeen resumed the second half with intent and took the game to Cahir. Within 20 seconds Conor Sweeney finished off a four-man move from the throw-in with a point and followed it up with a leveller at 0-9 each two minutes later.

Three more Conor Sweeney points without reply (two from frees won by Tommy Sweeney and William English) saw Bally' lead 0-12 to 0-9 at the three-quarters stage and in the ascendancy it seemed.

But Cahir were not going to roll over and a 10 minute surge of four points to one saw the game back at parity at 0-13 apiece with just four minutes remaining.

Two Johnny McMahon frees were followed by a well-worked one-two (twice) point between Daire O’Brien and Mikey O’Connor, the latter kicking the score; and when the same player added another point just a minute later the game was back in the melting pot.

With the outcome on a knife edge, the game’s only goal arrived to decide it. A move through the middle by Ballyporeen forced Cahir goalkeeper Keelan Hickey to pull off a great save but from the rebound Adrian English reacted quickest to slam the ball over the line for the crucial goal.

Shortly afterwards Cahir’s Johnny McMahon was red carded for an off the ball incident flagged by the linesman but still they refused to surrender with Dean Lonergan sending over a 45 to give them a chance. That ray of hope was finally extinguished by a late Conor Sweeney free which the livewire Adrian English had earned.

Ballyporeen can thank their scorer-in-chief Conor Sweeney for his 13 points which swung the result their way in the end but there were other fine performances too from the men in red and black, John O’Callaghan, John Martin, Tommy Sweeney, Anthony Crotty and Darragh Lyons all playing their part.

One could only feel sorry for Cahir who were short their county star Liam Casey, Eric Flannery, James McGrath, Kieran O’Dwyer, Benny Hickey (all through injury), with first choice players Keelan Looby and Brian McKenna in the US for the summer. It was too much to expect of those who took the field, but to their credit they never gave up to the end. However the likes of Ian Flannery, Niall McKenna, Mikey O'Connor and Dean Lonergan never stopped taking the game to their opponents.