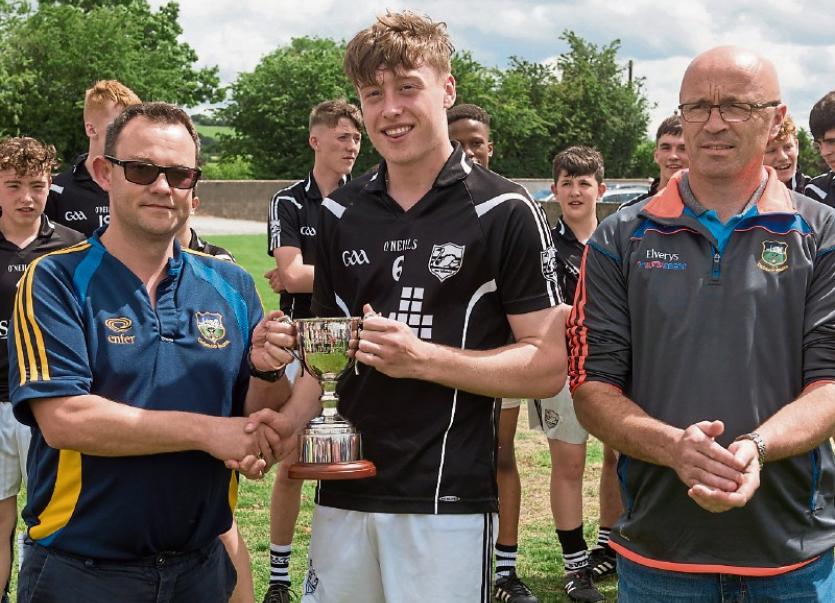 A strong all round display from a Carrick Swan side with an ability to get goals saw them beat Upperchurch-Drombane 4-6 to 2-9 in the County u-16 ‘B’ football final at Golden.

Carrick Swan looked very strong and when they opened up an eight point lead in the first half this game looked decidedly one sided.

Upperchurch won the second half and maybe had Carrick Swans Jamie Holloway not been so devastating in front of goal, the South boys may not have held on for the win.

That said a five minute spell where Jamie and Christy Griffin combined for 2.1, Jamie the goals, Christy the point.

They had a lot of work still to do as Upperchurch themselves bagged 2.1 in the closing moments. This made for a thrilling finish and with the final green flag waving in the air the referee blew the full-time whistle.

Upperchurch  got the first score from Keith Ryan. Aidan Waters finished off a neat Carrick move that signalled a long Carrick spell of dominance. Posts hit twice before Jamie Holloway opened his account with two from play Nigel O’Keeffe setting up one. Controlling the kick outs, Jay Meagher set Christy Griffin up to fire home.

The second goal, a typical Jamie Holloway driving run was spotted by Christy Griffin he passed and Jamie finished.

The last score of the half would be Carrick's after a right-wing move came to Christy Griffin to point, 2.4 - .03.

In the second half AJ Shanahan was fouled and Keith pointed the free.

Then Luke Shanahan’s brilliant free gave their support plenty to cheer about. The next two points both from Keith Ryan left just a goal between the teams.

Carrick spent a lot of time in their own half but an all important five minute raid on the “Church” all but settled this one.

Christy Griffin twice set up Jamie Holloway for a goal either side of a Christy point. As the teams traded points such was the gap it had an all over bar the shouting feel to it, 4.06 - .08.

Upperchurch found something in reserve, Keith Ryan coolly finished a penalty he won also knocking over a free. There was a sense of panic with a Carrick player receiving two yellow cards.

Another free which Keith took quickly and Oisin Treacy was on hand to score a goal. There would be time for no more as the supporters raced on to celebrate the win. Captain Erin Walsh collected the trophy from Chairman Tom Dawson and Secretary John Sheehy.