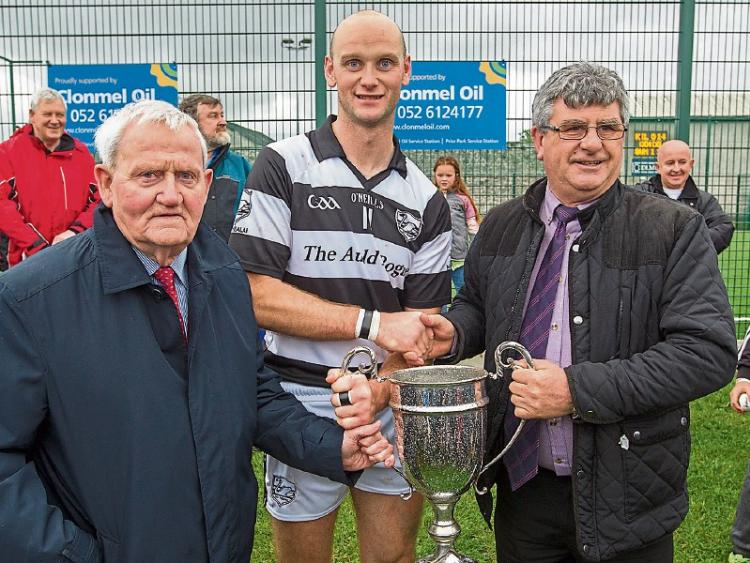 Swans manager Derek Hogan was delighted with the attitude shown by his team in beating favourites Killenaule by 1-13 to 0-14 in the Clonmel Oil-sponsored South Final in Fethard last Saturday.

"I said at the start of the year that our goal was to win the South”, he stated.

“People said we were mad when we got a few trimmings against top clubs" (in the County Championship).

"In the last few weeks I still maintained we would win the South because of their (the players') honesty and the workrate they were putting in, and the way they prepared. And here we are, it's the proof of the pudding.

A first divisional title in seven years looked a remote possibility when Swans shipped some heavy defeats at the hands of Thurles Sarsfields, Nenagh Eire Og and Kilruane MacDonaghs in the County Championship, which left them rooted to the bottom of their group with a scoring difference of minus 83.

And the manager admitted it was "a little bit hard" to lift morale after those defeats.

"But we re-structured, we had a chat.

"The players rallied together, they put their shoulder to the wheel.

“We knew there was more potential there, we introduced a lot of young players onto the panel, they gave us a bit of bite.

"For the last eight weeks they've put in a a savage effort, an honest effort, the selectors had a lot of help in the background as well.

"The year started off slowly, we were up against top teams. We regrouped, got it together and it was an honest performance and that's all we asked for.

"It's a great win. We got over the line so it's getting the Swan club back on the map".

"It's all about the club. Without the club and the help we're getting from them and everyone else around, that's what's getting us over the line.

“I always repeat, it isn't about individuals, it's a team effort".