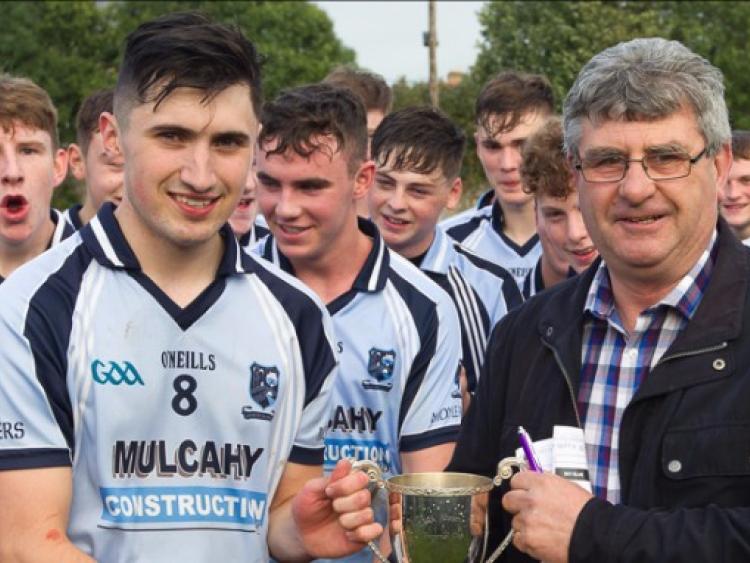 Captain Darragh Bolger receives the cup from Michael Cooney, chairman of the South Board, after Moyle Rovers beat St. Mary's in the South Minor A Hurling Championship Final at Cahir on Saturday.

St. Mary's great run at Minor level came to an end when they were beaten by Moyle Rovers in the South Tipperary Minor A Hurling Championship Final at Cahir on Saturday evening.

St. Mary's were bidding to win the County Championship for the third year in-a-row, but they came unstuck against their neighbours in a closely-fought final.

There was never more than a puck of a ball between them and the teams were level five times over the hour.

Rovers were slightly the better team in the opening half and deserved their slender 0-5 to 0-4 advantage at the midway stage.

St. Mary's came much more into it in the second half and four unanswered points - two from Sean Kennedy frees and two great scores from play from Josh Ryan and Conor Deeley - saw them ahead by 0-9 to 0-6 with 12 minutes remaining.

Rovers were struggling at that stage but somehow they found their second wind to produce a late surge that proved decisive.

Rian Quigley had the Powerstown/Lisronagh team's first score in almost a quarter of an hour and further scores from captain Darragh Bolger and a fine long distance effort from Ben Owens had them level with six minutes remaining.

Both sides had chances to add to their tally in the tense closing stages but it was Rovers who prevailed, thanks to Diarmuid Mulcahy's point five minutes from the end of normal time, with Rian Quigley providing the assist.

Rovers now have a chance to complete the South and County double that they last achieved three years ago. They deserve enormous credit for picking themselves off the floor and resurrecting their challenge when they looked in trouble.

Rian Quigley was a great source of inspiration while Diarmuid Mulcahy's scoring contribution also proved crucial. Cillian Crowe did well when pushed into attack while Ben Owens, Brian Lacey and Sam Power all defended stoutly to put the stranglehold on the St. Mary's attack.

St. Mary's seemed to have the game well within their grasp but they failed to push on when they were well on top midway through the second half. They were also left to regret the ten wides that they shot in the second half, which was as many as Rovers had throughout the game.

Sean Kennedy and Josh Ryan gave their all in attack while Conor Deeley was prominent at midfield. Joe Gunne gave a wholehearted performance while Jamie McGuire, Sean O'Connor and Darragh O'Keeffe also did well.