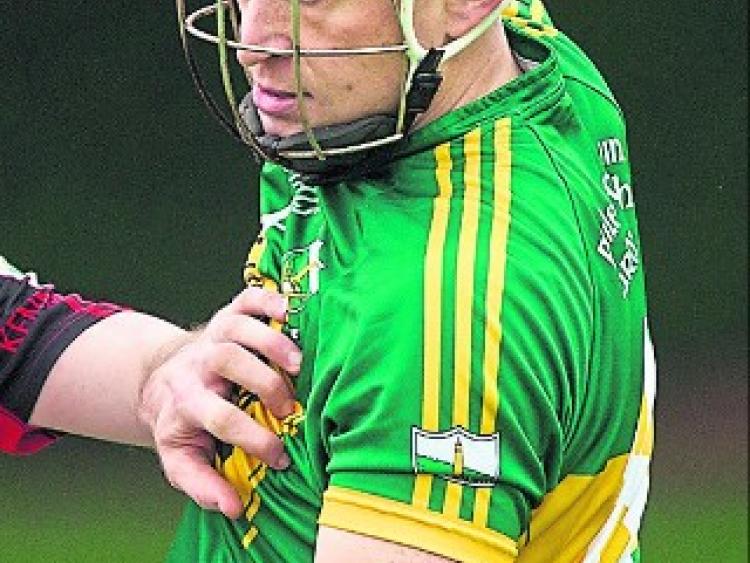 Michael O'Sullivan had a great game for Ballybacon/Grange when they beat Cork team St. Catherine's in the Munster Club Junior Hurling Championship semi-final in Ardfinnan.

These are heady days for the hurlers of Ballybacon/Grange. Last weekend their juniors won the club's first adult county title, beating Toomevara in the county A final, and on Sunday they reached their first Munster final when they beat Cork team St. Catherine's in the provincial semi-final in Ardfinnan.
Former Tipperary goalie Brendan Cummins, who scored six points from frees, was their top scorer as they booked their place in the decider against Waterford's Ardmore, who enjoyed a landslide 5-22 to 1-8 win over Bodyke from Clare in Sunday's other semi-final.
The final is scheduled for Mallow on December 3rd.
St. Catherine's were the better team in the early stages and they led by 0-5 to 0-1 after a quarter of an hour.
However Ballybacon - the last Tipperary team left in the Munster championship - were dogged and determined throughout, and despite playing against a strong breeze in the opening half they hauled themselves level with four unanswered points.
Aaron Lonergan and Brendan Cummins converted frees and they edged closer with their first point from play, supplied by Daniel O'Regan in the 22nd minute when he put the finishing touch to a move that originated with captain Craig Carrigan in defence and was continued by Gerry Cronin and Aidan Savage.
A Brendan Cummins free had the sides level by the 25th minute, and although Brian Mulcahy restored St. Catherine's lead, another accurate Brendan Cummins free - this time from just inside the '65 line- ensured that the sides headed for the dressing rooms level at 0-6 each.
There was a lively start to the second period. St. Catherine's hit the ground running with three points in the opening four minutes through Brian Mulcahy and captain Daniel Mangan (0-2) and the Cork side, playing their third game in a week, seemed on course for victory.
However Ballybacon produced an emphatic response, scoring the game's only goal, and a crucial score at that, within five minutes of the re-start.They built steadily from the back through Brendan Cummins and Michael Barlow and when Daniel O'Regan collected Billy Hewitt's pass he steered a low shot to the corner of the net with a tremendous strike from all of 30 yards.
Ballybacon never looked back after the goal, although they couldn't be fully sure of victory until the final whistle against a St. Catherine's team that after scoring their ninth point failed to register another score in the remaining 30 minutes, including additional time.

A Brendan Cummins free from halfway put Ballybacon ahead for the first time and they extended the lead with another Cummins free and a point from Aidan Savage, when Daniel O'Regan picked him out with a precise crossfield pass, as they began to dominate.

Despite Aaron Lonergan missing a couple of frees, a Brendan Cummins free - struck from well inside his own half, and easily his best effort of the afternoon - put them four ahead with nine minutes of normal time remaining.
St. Catherine's, with three players who helped divisional team Imokilly win the Cork senior hurling championship (Daniel Mangan, Brian Mulcahy and Eoin Condon), pressed hard in the closing stages but their efforts were repelled by some stout defensive work by the Tipp champions.
Conor Hegarty made a great catch from Daniel Mangan's free but was crowded out of it by the tenacious Ballybacon defenders before being penalised for over-carrying.
They also shot a couple of wides before Brendan Cummins made a great catch under the posts before being fouled in the final minute of normal time.
After Ballybacon's Declan Walsh was sent off in the first of the four minutes of additional time when he picked up a second yellow card - following an incident that saw St. Catherine's William Walsh also receive a yellow card - it was a case of all hands on deck in the closing moments.
Brendan Cummins, one of eight Ballybacon players who lined the goal, blocked a late free from Daniel Mangan and Ballybacon finished in style when Aaron Lonergan clipped a delightful shot between the posts.
That score put the seal on a deserved victory to delight their supporters in the attendance of 600 hardy souls, who enjoyed a full-blooded and committed encounter on a sunny but cold afternoon.
As well as the impact he made from those long-range frees, Brendan Cummins was an inspirational figure between the posts. In front of him all six defenders - Philip Walsh, Eoin Walsh, captain Craig Carrigan, Michael Barlow, Colin O'Gorman and Sean Nagle - slowly but surely got the better of their opponents and put the shackles on the St. Catherine's attack.
Midfielders Michael O'Sullivan and Brian Dillon worked overtime while Daniel O'Regan, Aaron Lonergan and Aidan Savage carried the greatest threat in attack.
It was an eventful week for St. Catherine's. As well as the drawn Cork county final with Brian Dillons on Sunday and the replay on Tuesday night (which they won by a point), the club also hosted a Strictly Come Dancing fundraiser on Saturday, which explained the bronzed limbs of players including Conor Hegarty, Eoin Condon and Rory Galvin, who looked unusually tanned for this time of the year.
Their best were Brian Mulcahy, William Walsh (a son of former Cork player and manager Denis Walsh), Eoin Condon and captain Daniel Mangan.