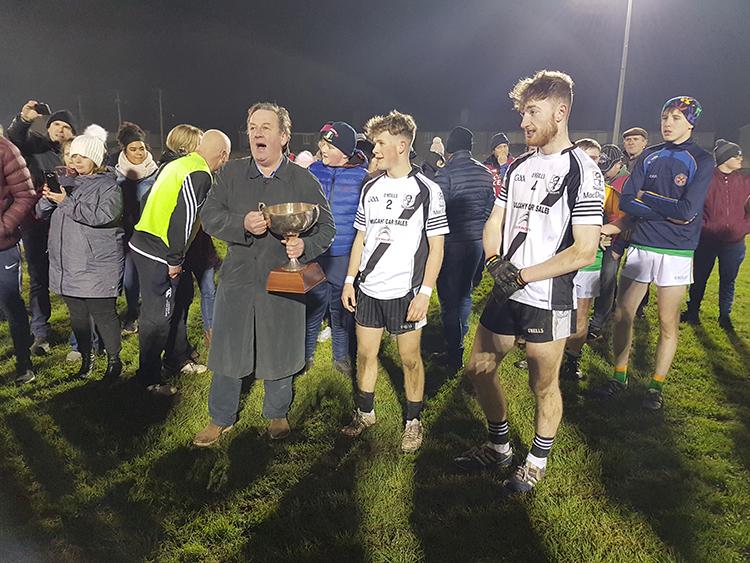 Moyne-Templetuohy-Thurles Gaels made a very slow start to this final and paid dearly for it. Indeed, a rampant Kilruane side led 2-6 to 0-1 after fifteen minutes with the goals arriving courtesy of Kian O’Kelly and Jerome Cahill.

The MacDonagh’s led by ten at the break (2-7 to 0-3) and although Moyne-Templetuohy-Thurles Gaels improved significantly in terms of their application in the second half Kilruane were crowned champions. And, deservingly so - the MacDonagh’s played the better football, featured some terrific individual performances and were relentless in their tackling.

Kilruane were irresistible during the opening quarter and played some terrific football against a Moyne-Templetuohy-Thurles Gaels who, to be fair, looked a little stunned.

Goalkeeper Karl Williams landed a free in the opening minute before Craig Morgan added a point. Moyne-Templetuohy-Thurles Gaels responded through Ben Ryan, but the MacDonagh’s then proceeded to hit 2-4 without reply.

Luke Dervan landed two crackers from play and Mathew Spain swung over a brace of frees while the goals arrived one after the other in the 13th minute. Kian O’Kelly buried a superb shot off his right before Mathew Spain and Páidí Williams combined beautifully - Williams picked out Jerome Cahill on a terrific supporting run and the full-back fired low and hard past a helpless Barry Ryan. Kilruane led 2-6 to 0-1 after fifteen minutes.

Moyne-Templetuohy-Thurles Gaels threatened significantly in the 19th minute - Conor Bowe created a goal-scoring opportunity for Seán Hayes whose effort was saved by Karl Williams. The play was called back for a foul on Bowe and the full-forward took responsibility for the ensuing penalty which Kilruane ‘keeper Karl Williams managed to deflect over the bar - a brilliant stop.

In the 25th minute Moyne-Templetuohy-Thurles Gaels ‘keeper Barry Ryan conjured a terrific save of his own when denying Devlin Courtney. And, the half came to a conclusion when Karl Williams (’45) and Conor Bowe (free) traded scores (2-7 to 0-3).

Karl Williams added a free to his side’s tally before making a telling interception in the 36th minute when Dean Lawlor looked certain to goal following a promising Moyne-Templetuohy-Thurles Gaels move. Three minutes later Karl Williams saved another stinging effort, this time from Michael Mulcaire as Moyne-Templetuohy-Thurles Gaels tried to fight their way back into this contest.

Kilruane, however, always looked the more accomplished footballing outfit and added to their tally through the efforts of Mathew Spain, Owen Usman and Karl Williams (free) to lead 2-11 to 0-3 with ten minutes to play.

In the 51st minute Karl Williams, the outstanding candidate for the man of the match award, saved from Conor Bowe, but Seán Hayes was on hand to scramble home the rebound.

Kilruane MacDonagh’s saw out the remainder of the contest reasonably comfortably with only the dismissal of Devlin Courtney for a second bookable offence in the 60th minute putting any kind of an dampener on the celebrations.