Tipperary footballers can consider themselves very fortunate to have escaped with a draw from their National Football League game against Clare in Ennis today. No doubt about it, the home side should have taken the spoils and they will be kicking themselves tonight that after three games in this year’s league campaign they are still looking for their first win.

Having trailed at half-time to Tipperary by two points, 0-7 to 0-5, ‘The Banner’ were back level eight minutes after the resumption, and with a strong breeze behind them for the remainder of the game, looked very likely winners. The two points from Lillis and Cleary came either side of a miraculous escape for Tipperary. A high ball in by a forward slipped through the hands of goalkeeper Evan Comerford and Shane O'Connell, a full stretch, just got enough on the ball to save it from crossing the line.

Bizzarrely the game took a huge turn in the 40th minute. Clare wing-forward Jamie Malone forcefully pushed aside Tipperary selector Shane Stapleton outside the sideline, causing the Golden/ Kilfeacle man to fall heavily to the ground. Malone immediately apologised to Stapleton who was quickly back on his feet and the game seemed to restart. The linesman then called the attention of referee Jerome Henry to the incident and the Mayo man, on second thoughts, gave a straight red card to Malone. It was the correct decision. In the ensuing furore amongst a seriously disgruntled Clare outfit, their corner-forward David Tubridy was brandished a black card by Malone, for remonstrating, and the momentum Clare seemed to be building was stalled temporarily at least.

Two points in a minute followed for Tipp from Jimmy Feehan and Bill Maher and it appeared the numerical advantage of an extra man would see Tipp home on a bitterly cold day at Cusack Park.

But the attention of the spectators was soon back on the sideline where Shane Stapleton, injured in that collision with Malone minutes earlier, had collapsed to the ground. Medics from both sides came to the attention of the Tipperary selector immediately before Stapleton was stretchered off under the stand. He would be taken by ambulance to hospital in Limerick shortly after the final whistle. Everyone wishes Shane a speedy recovery to full health. 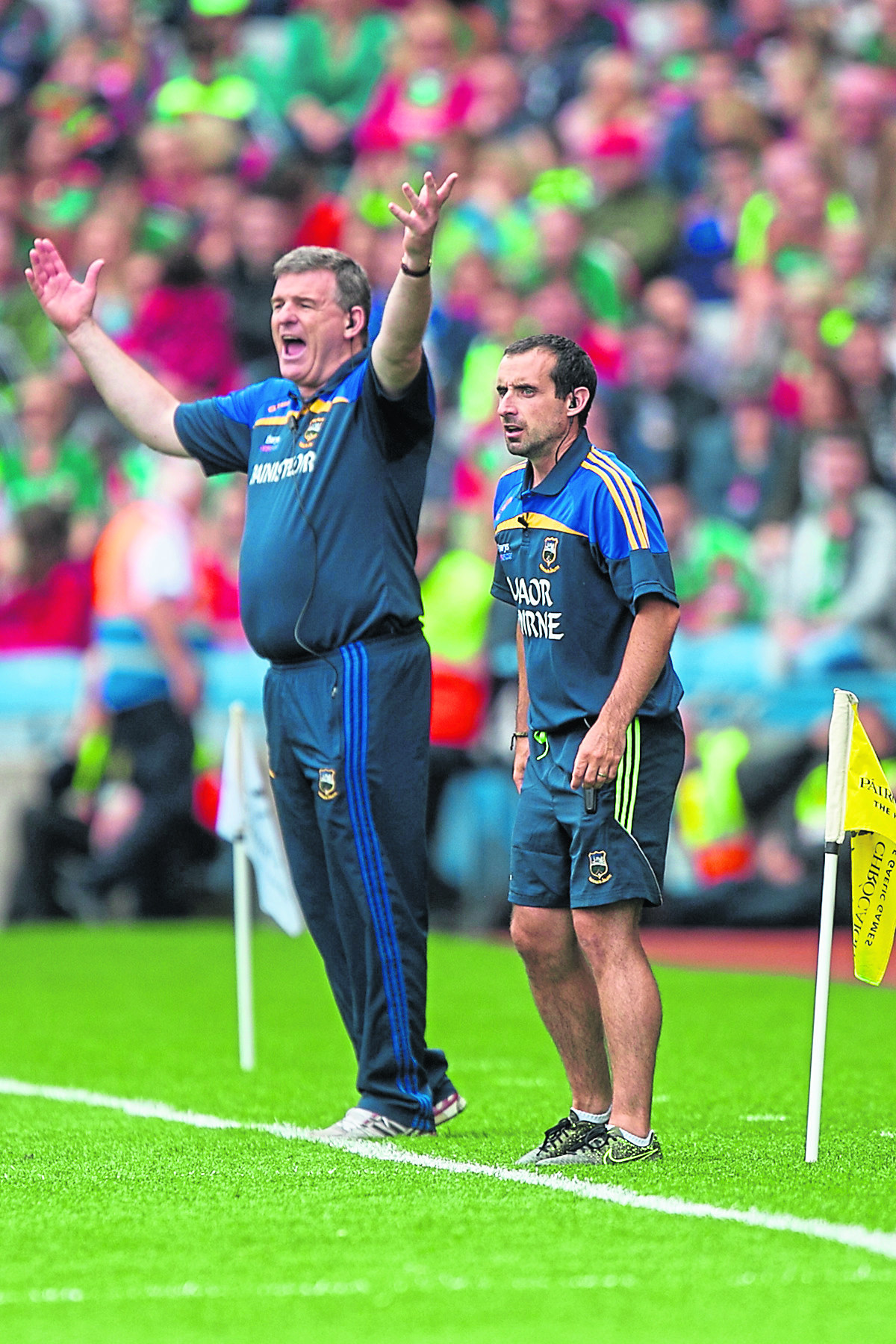 Clare readjusted from the dismissal of Malone and the loss of Tubridy and were back to parity, at 0-10 each, with seven minutes to go and a very poor Tipp performance looked like being punished. The superb equalising point for Clare from all of 40 metres by the  influential wing back Pearse Lillis seemed to signal that Tipperary would for the second consecutive week lose out late, having led by four points twice the first half.

Encouragingly, on a day of very few positives for Liam Kearns’ side, Tipp fought on and re-took the lead with Conor Sweeney’s fifth free of the day, five minutes from time. The advantage on the scoreboard and the numerical advantage however disappeared almost immediately when a Josh Keane foul earned him a second yellow card and Keelan Sexton pointed the free for 0-11 points each. Keane had picked up a yellow in the first half for dissent. Clare would go on to finish with 13 men after centre-forward Eoin Cleary received a black card just seconds from then end of the encounter.

The same Sexton was then presented with another scoreable free soon afterwards but somehow missed poorly, much to the relief of a desperate Tipperary. Clare were to get an even handier chance of a winner in added time when Alan Sweeney raced through and had a soft point at his mercy but somehow failed to convert the gilt-edged chance.

And Clare nearly paid for it right at the death when Tipperary substitute Sean Carey had an effort at a winning point bravely blocked down at full stretch by Cian O’Dea. If Carey had scored the winner it would have been rough justice on the home team. Nonetheless Tipp can thank their blessings of a point gained on a day that their performance scarcely deserved it. It may prove vital before this keenly contested Division 2 finishes at the end of March with four games still to come for Tipperary.

They now have a two weeks break before the home game with Meath on Saturday, 24th September. They must improve.

Tipp with a strong wind behind them started the better and were 0-5 to 0-1 ahead at the end of the first quarter with Conor Sweeney accounting for four of those points (2 frees) and Liam McGrath finishing a hard earned point following determined work up along the sideline by Jimmy Feehan and Josh Keane.

Liam Casey chipped in with a Tipp point from 40 metres, before a well-worked move by the visitors resulted in Robbie Kiely being impeded before Conor Sweeney put Tipp 0-7 to 0-3 up with the resultant free.

But the home side were to finish the opening half the stronger hitting back with two points from wing back Ciaran Russell and a free from Eoin Cleary after Brian Fox was unlucky to have be penalised. Fox at this stage was doing trojan work in a roaming role coming to his side’s rescue at least twice with turnovers.

Clare were guilty of some poor wides in the opening half, five in all, while, perhaps a reflection of their lack of opportunities, Tipp didn’t have their first wide until the 31st minute of the game.

With Quinlivan now gone off injured and replaced before half-time by Kevin Fahey, Tipp also introduced Kevin Fahey at the break for his clubmate Jack Kennedy. But it was Clare who started the second period the better and Pearse Lillis and Jamie Malone had them level  (0-7 each) before the sideline incident.

Tipp briefly regained the upperhand after the dismissal of Malone for that collision with Tipp selector Shane Stapleton, but Clare definitely had the better finish on the day, as once more Tipperary seemed to lose their shape and direction late on, for the second successive week.

In the end, in what was described by Liam Kearns’ afterwards as the worst performance he could remember from Tipperary, his side got out of jail. Hopefully they will reflect on this, in time, as a point won rather than a valuable point lost.