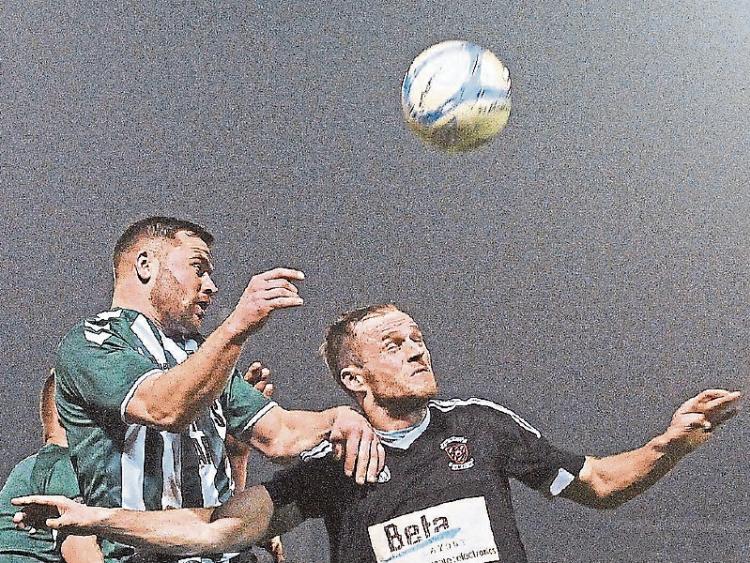 Saint Michael’s tumbled out of a second cup in a fortnight, when they were mugged - just like they were in the FAI Junior Cup - by a late onslaught from Cork side Leeds FC, after looking the better team for most of the game.

The Tipperary Town side  started a bit tentatively and conceded the early initiative to the home side. They eventually found their feet however and forged some good chances through the always dangerous Jimmy Carr and David Slattery.

Leeds’ Cal Sheehy tested Aido Walsh in the Saints goal and at the other end a Joey Mulcahy half volley was saved by Stuart Coakley after a flurry of activity midway through the half.

The TSDL champions continued to have the better of the play looked like they wouldn’t find a breakthrough until they won a corner kick in first half stoppage time. When the ball was swung in, the referee’s assistant flagged for a handball in the area and Joey Mulcahy buried the penalty to give the Saints a goal lead at the break.

They were unlucky not to double that lead twice in the first five minutes of the second period after both Shane Ryan and Chris Higgins were thwarted, and this set a pattern for the second half to follow the first, with the junior side more than putting it up to their higher grade opponents.

Chances went over and back but going into the last ten minutes the Tipperary team still looked comfortable, despite not being able to add to their lead.

Unfortunately as has happened on too many occasions this season, they were punished for not putting games to bed when they were in the ascendency.

In the 80th minute the Cork team levelled the game when substitute Eric Murray played a ball in which saw Kenny O'Leary get goal side of James Walsh to score from close range. Saints had barely recovered from this shock, when two minutes later they watched in horror as Kenny O’Leary's corner kick went straight into the net at the near post.

Severely rattled now, they lost all composure and resorted to hoisting long high balls which were easily dealt with in the air by the Leeds defence.

Throwing caution to the wind, the left the door open at the back and in stoppage time another substitute Kyle McNamara picked up a loose ball on the left and found Cal Sheehy in the Saints penalty are, and he tucked the ball home to end all chance of a comeback.