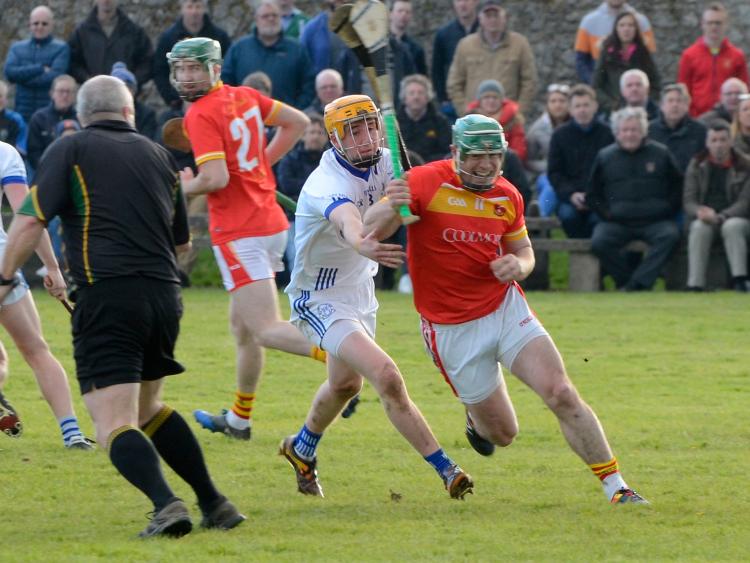 A John O’Dwyer-inspired Killenaule proved too strong for St. Mary’s in the Clonmel Oil sponsored South Tipperary Senior Hurling Championship semi-final played at Fethard on Sunday evening, easing home by eight points despite playing with 14 men from the time Kieran Bergin received a straight red in the 24th minute.

At no stage during the game were Killenaule led by the Clonmel side, now back at senior grade for the first time since 2002, and at no stage was the result in doubt, particularly after ‘Bubbles’ O’Dwyer netted for ‘The Robins’ as early as the seventh minute.

That move in itself was indicative of the extra class that Killenaule possess over last year’s county intermediate champions. The move was started in the half-back line by great defending from Eoin Barry (who put in a magnificent hour) and worked through Dean O’Connor before a powerful run and finish by O’Dwyer to batt the sliotar past Shane O’Neill. It gave Killenaule an early four points cushion at 1-3 to 0-2 and thereafter to the finish they held control of the game.

By half-time Killenaule were six points clear at 1-12 to 0-9 as St. Mary’s were finding their baptism back in the cauldron of the South championship after 16 years, a big step up. In that opening half, a now fitter looking John O’Dwyer contributed 1-7, including three excellent points from play, with Eoin Barry, Patrick Kerwick and Michael Doyle also contributing to the scoreboard in a well-oiled attack.

St. Mary’s on the other hand throughout the opening half were too dependent on frees (0-5 out of 0-9), and didn’t help themselves with six poor first half wides, three in a two minute spell right before the break when they needed to keep in touch with their more experienced opposition.

A big talking point at the break was the dismissal in the 24th minute of former county hurler Kieran Bergin, adjudged to have pulled the helmet from his oppoinent Kyle Peters. In the same piece of play, following the helmet incident, John O’Dwyer appeared to strike St. Mary's wing-back Liam Ryan. After consulting with his umpires, for both calls, referee Keith Delahunty showed Bergin a straight red, and fortunately for Killenaule and Tipperary perhaps, O’Dwyer was sanctioned with just a yellow.

St. Mary’s needed a good start after the interval to pull themselves back into the game. After conceding the first point to Killenaule’s ‘Festy’ Kerwick, ‘The Marys’ scored four unanswered points from Seamus Kennedy (F), Josh Ryan, Jason Lonergan and Seamus Kennedy (off his left) to pull the deficit back to 1-13 to 0-13 just seven minutes in. Was a charge on the cards?

When play resumed after a hold up for injury treatment to Joe O’Dwyer (he was substitued by Daniel Guinan) Killenaule drove on with five points inside four minutes to wrestle the initiatve back from St. Mary’s and at eight points clear midway through the second half – and holding all the aces it seemed – Killenaule were well and truly on their way back to the South decider. St. Mary's Seamus Kennedy tried everything he could to inspire St. Mary's against Killenaule, contributing eight points (five frees) over the hour.

In the final quarter all St. Mary’s could manage were a few long range points from Sammy Ryan, Jason Lonergan and Richie Gunne, but all the while ‘Bubbles’ was breaking their hearts from placed balls as ‘The Robins’ made their experience and extra class count on the night.

Two minutes from the end the Clonmel side were reduced to 14 men when captain Sammy Ryan received a second yellow for a 'stroke' on ‘Bubbles’ – and if the Killenaule player was lucky to have avoided a straight red in the first half, Ryan was equally so on this occasion. Typically O’Dwyer dusted himself down and pointed the free from inside his own 45 and on the sideline to make a statement that many Tipperary followers might take hope from as the inter-county championship nears. There is no doubt about it, O’Dwyer on his game is a class act.

When the full-time whistle eventually sounded, Killenaule were full value for their 1-23 to 0-18 victory and can now look forward to another South final with neighbours and arch-rivals Mullinahone.

Killenaule were commanding all over the field no more so than in defence in which they never allowed the Clonmel forwards threaten Matthew O'Donnell's goal. Killian O'Dwyer, Paddy Codd, the Feehans and Joe O'Dwyer stood out and Killenaule will be hoping Mouse's injury isn't too serious. Eoin O'Connell and captain Thomas Keaveney had their moments around the middle of the park while in the forwards besides 'Bubbles', Eoin Barry with four fine points, 'Festy' Kerwick and Michael Doyle were best.

For St Mary's this was their first big test as to where they are at senior grade and they know exactly where now, after playing second fiddle to Killenaule. But it is also exactly where they need and want to be - playing at the highest level they can and they will learn for it. Even in defeat they can take a lot of heart from a battling performance against a well-weathered team with a sprinkling of present and former county senior panellists.

Seamus Kennedy stood out as their best by far and put in a trojan first half in particular and tagged on some nice points from open play. However, as he understandably tired in the second half from his exertions, the heart fell out of the Mary's challenge almost simultaneously. But there were other good performances too from a young and learning St. Mary's. Jason Lonergan, Eric Walsh, Richie Gunne, Sammy Ryan and Joe Gunne (up to the time of his injury) left nothing behind in defeat.