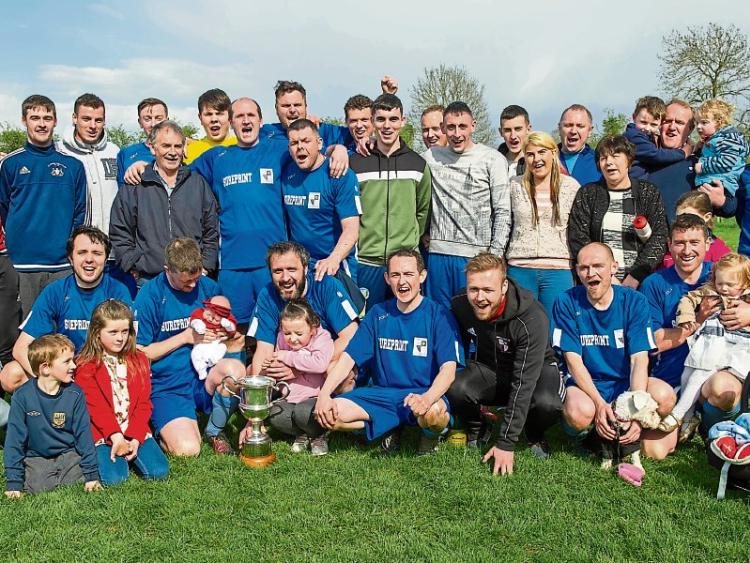 Kilmanahan United celebrate with family and friends having been crowned Division 3 champions with a 4-0 win over Ballyneale at Kilmanahan on Sunday last.

Results last weekend meant that although these two teams are promoted from the Third Division, the title had already been wrapped up so the tie was in effect a dead rubber of a game.

That didn’t change the approach to the match from the league winners and they continued with the vibrant brand of football that saw them take the title over their guests on the day. The home side opened the scoring on the day in the eight minute when Andy Hickey found Dave Garrett alone in the box to score the first of a hat trick on the day for the Kilmanahan striker.

It was still 1-0 at the break and Garrett got his second eight minutes into the second half when his shot from just outside the area eluded the visiting keeper. A tap in from less than six yards minutes after the hour mark had the home supporters celebrating and a fourth goal by Mikey Quinn, a drive from the edge of the area was the icing on the cake and the precursor to a night of celebration in Kilmanahan.

With the league decided and nothing more for these sides to play for, the home side capitulated easily to a visiting Two Mile Borris team on Sunday, intent on finishing the season on a high. Borris were two goals up at the interval and added a third shortly after the break. Michael O’Riordan pulled one back for the hosts and when Borris had a man sent to the line it looked like comeback may have been a possibility.

Unfortunately for the hosts this wasn’t to be, as when they committed themselves to attack, they frequently left the door open at the back and conceded three more goals to leave their supporters very disappointed in the end.

This was a typical near end of season game with both teams just playing for pride.

The winning goal came after just ten minutes when a ball was put in to the Bansha Celtic  box and it was put away by the head of a Celtic defender. Both teams had chances in the remainder of the half but the defences held out. Bansha Celtic dominated long periods of the second half and had some great chances but all to no avail and Moyglass came out winners by the single goal.