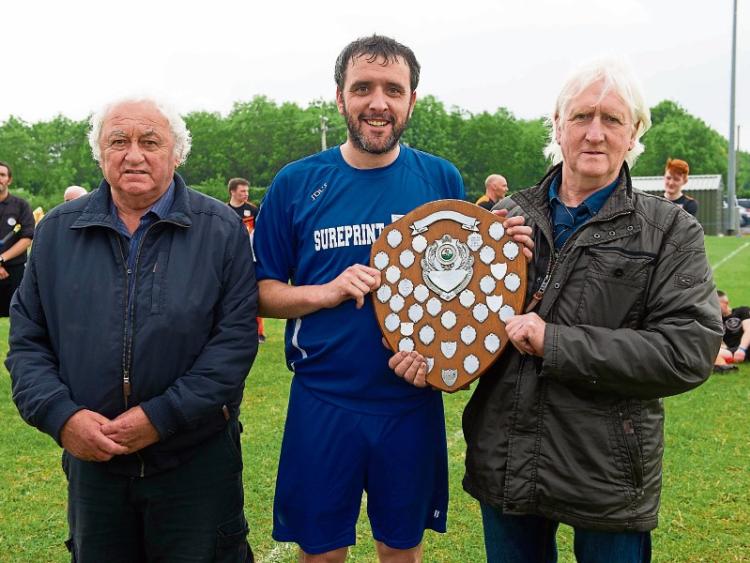 John English, captain of Kilmanahan United, receiving the Division 3 Shield from Liam Clohessy, Chairman TSDL, after their 3-1 win over Moyglass United in the final played in Moyglass on Sunday.

The final piece of TSDL silverware in the 2017-18 season was handed out on Sunday afternoon in Moyglass, when Kilmanahan United added the Third Division Shield to their league title after they came from behind to beat a game Moyglass side.

That said the victors had to come from behind to do it, after the home side took the lead only seven minutes into the game. Moyglass had forced a corner kick and when the ball was delivered into the area Dylan Gayson smoothly side footed through a sea of legs into the bottom corner to have the home support cheering.

Unfortunately it wasn’t to last too long as eight minutes later another corner lead to a goal this time at the other end of the field. A brilliantly delivered set piece was flicked on by Damien O’Donnell, and hovering with intent behind was team captain John English to head to the net. The game was being played at a mile a minute at this stage and two minutes later the home side thought that they had re-established their lead only to see Dylan Gayson denied a second by an offside flag. Calming down after that there were no more chances that really troubled either keeper and the sides went to the break level.

It was a three minute spell at the beginning of the second half that decided this tie. The tea was barely settled in the belly when Kilmanahan took the lead after David Garrett slipped past the home defence to fire to the net.

Hat-trick for 'Garrett the Great' as Kilmanahan lift league title

Only minutes later it took a very brave dive at the feet of Garrett by home keeper Keith Phelan to deny the Kilmanahan United striker his second, and the keeper had to make another great save from the resultant corner kick.

But eventually the pressure told and in the fourth minute of the second period Kilmanahan attacked down the right before Darren Guiry squared a ball back across the area. It was initially cleared out to the edge of the box, but lurking with intent was United’s Derek McGrath and he slammed the ball home to increase his side’s advantage.

Just on the hour mark Moyglass United looked to have been thrown a lifeline, but they saw a headed effort come down off the crossbar onto the line and away to safety.

After that the league champions shut up shop and reduced Moyglass to half chances  coming from set pieces, but never enough to trouble the United keeper.

The clock ran down and the Kilmanahan crowd basked in a second trophy after the end of a long season.