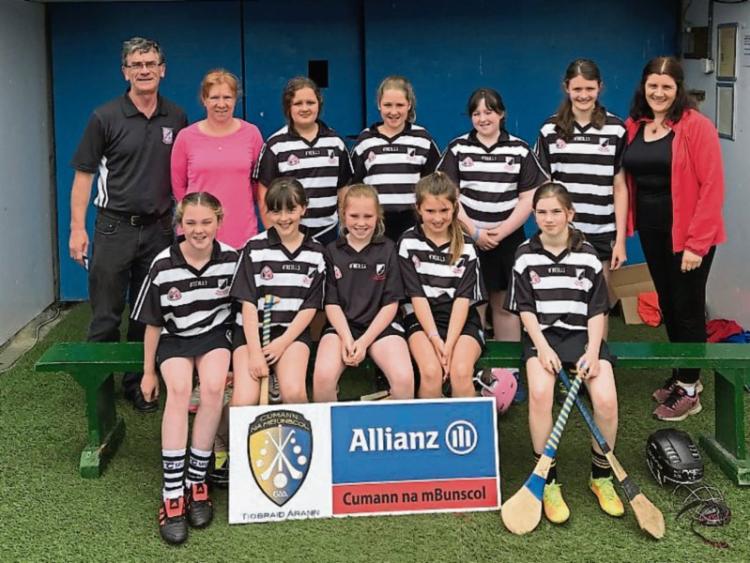 COUNTY CHAMPIONS! Donaskeigh Girls Under 11 team pictured at Semple Stadium prior to their county final win over Holycross.

Cumann na mBunscol Under 11 A Camogie

Donaskeigh’s Ellen Farrell drew first blood putting a point over the Holycross crossbar from a well-aimed free and set the supporters in the stand alight. Rhianna Cahill responded quickly to the challenge laid down and found the crossbar of the Donaskeigh goal to heap the pressure on Donaskeigh.

Sophie Lee, supported by Rhianna Cahill, worked tirelessly to answer Donaskeigh’s challenge and scored 3-00 between them before the half time whistle.

Ellen Farrell and Sophie Farrell backed by an on-fire Ruby Kelly diligently tried to close the gap between their side and Holycross scoring 1-5 between them but it was to be Holycross who would lead going into the second half.

Donaskeigh were a team renewed coming on for the last leg of the match. The back line of Ava Lynch and Saoirse O’Dwyer put up a solid defence against Holycross while the forward line lead by Caoimhe Hanley  and Millie Kelly would score 2-02 before the final whistle blew.

It was to be Donaskeigh’s day as they steamed ahead in the scoreline.

Holycross never let their spirits slip but Donaskeigh would claim the title and the shield for their school.