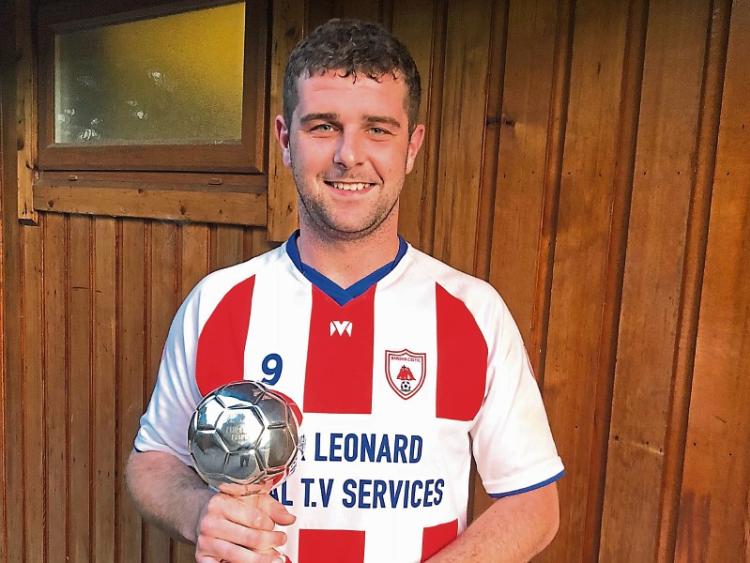 Bansha Celtic captain Niall Daly with the John Delaney Cup after his side's 3-1 win over St. Michael's in the final played at Cahir Park on Thursday night.

The first silverware of the new TSDL season went to Bansha Celtic on Thursday night last when they stunned their local rivals, and hot favourites St. Michael’s with a 3-1 victory at Cahir Park AFC’s ground.

And there were no doubting, Celtic, appearing in their first ever John Delaney Cup decider, were fully deserving of their victory.

Bansha Celtic, last season’s Premier League runners-up may yet prove the biggest threat to the reigning league and cup double champions in the year ahead. A lot of course will depend on their ability to field teams when counter attractions pull on their limited squad numbers. Thursday night’s encounter was a hard fought game and it was St Michael's who took an early lead when a Shane Ryan corner kick was met by the head of Jonathan Kennedy.

Soon afterwards Bansha Celtic were presented with a gilt-edged chance to equalise when they were awarded a penalty after Bernard Fitzgerald was brought down in the area. However, Kevin Mullins’ spot kick was brilliantly saved by Adrian Walsh in the Saints goal and the Tipperary side preserved their 1-0 lead to the break.

Bansha Celtic upped their intensity even further after the interval.

In defence Sean Daly, Michael Fitzgerald, Kevin Mullins and Seamus Kinane were on top and St Michael's couldn’t add to their lead. Bansha’s perseverance was eventually rewarded and in the space of 11 minutes ‘Man of the Match’ Bernard Fitzgerald hit the back of the St Michael’s net three times to send the Bansha supporters delirious. St. Michael's who lost 3-1 to Bansha Celtic in the John Delaney Cup Final.

As much as St Michael’s tried late on to wrestle the initiative back, Bansha Celtic were not to be denied a famous victory.

The John Delaney Trophy will be resting at the foot of the Galtees for the next 12 months at least. An encouraging start to the 2018/2019 season for Bansha Celtic who will no doubt be hoping to get their hands on more silverware throughout the coming months.