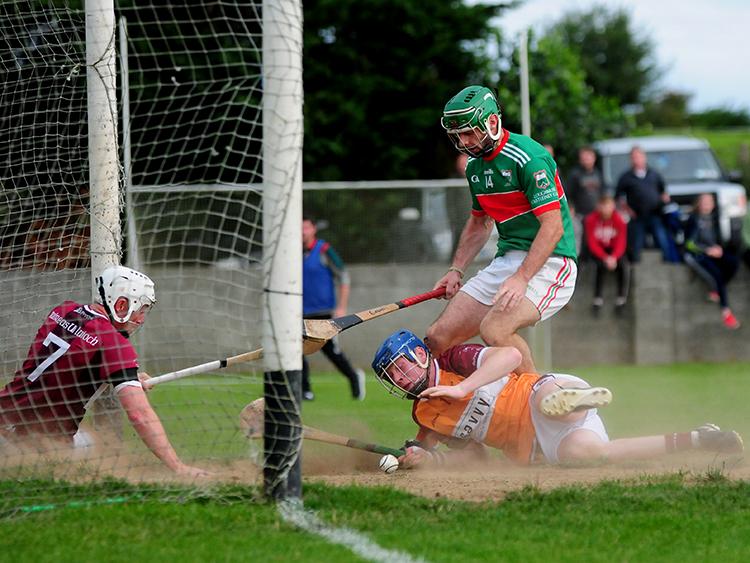 Loughmore-Castleiney got their Tipperary Water County Senior Hurling Championship campaign back on track at The Ragg on Wednesday evening thanks to an eleven-point win over Borris-Ileigh. Having lost their opening round contest against Kiladangan the Loughmore-Castleiney men badly needed a win and got so, but at a significant cost with both Tomás McGrath and John Ryan shipping straight red cards.

As a result of this clash in group four of the Tipperary Water County Senior Hurling Championship Kiladangan are top on four points (+5), Loughmore-Castleiney are second on two points (+10), Borris-Ileigh are third on two points (-7) and Portroe are fourth on zero points (-8).

On Saturday evening at MacDonagh Park in Nenagh the Kiladangan men got the better of Portroe (1-22 to 1-18). Borris-Ileigh beat Portroe (2-10 to 0-12) in the opening round while Loughmore-Castleiney lost a thriller against Kiladangan (1-11 to 0-15).

In the third round of games Loughmore-Castleiney will be expected to book their place in the quarter-finals courtesy of a victory over Portroe while Borris-Ileigh will require a seven-point win over Kiladangan in order to progress on scoring difference. This is a tall order for a Borris-Ileigh team who are already without Brendan Maher and Niall Kenny while Dan McCormack and Paddy Stapleton are most obviously carrying injuries.

Loughmore-Castleiney led at the break having played with the breeze (1-12 to 0-8). Noel McGrath played the deep-lying centre-forward role to perfection while John and Liam McGrath wreaked havoc on the inside line. Indeed, the opening six minutes featured a smashing Loughmore-Castleiney move: Liam Treacy, Liam McGrath and John McGrath combined beautifully before Ciarán McGrath delivered the composed finish and Declan Laffan’s men led 1-2 to 0-1.

Borris-Ileigh steadied nicely with Conor Kenny in outstanding form and managed to trade scores with Loughmore-Castleiney for some time although James McCormack was asked to make a terrific double save in the 13th minute to deny John McGrath and then Ciarán McGrath in quick succession.

An exhibition of free-taking from Conor Kenny kept Borris-Ileigh in touch and there was a very manageable three points between the sides (1-7 to 0-7) with twenty-three minutes played.

Three successive points during the opening eleven minutes of the second half - one an absolute beaut from Conor Kenny - dragged Borris-Ileigh back into contention (1-12 to 0-11), but Loughmore-Castleiney responded to the challenge brilliantly when out-scoring their opponents 0-5 to 0-1 between the 42nd and 47th minutes. Noel and John McGrath were central to Loughmore-Castleiney’s best work and now Declan Laffan’s men led 1-17 to 0-12.

In the 48th minute a Conor Kenny raid was brought to an unceremonious end by Tomás McGrath and the Loughmore-Castleiney midfielder was sent off. Borris-Ileigh, however, struggled to take advantage of their numerical superiority. Indeed, Johnny Kelly’s men only managed 0-6 from play during this encounter.

There was still eight between the sides entering the final five minutes when Noel McGrath cracked over a superb shot into the wind and from inside his own half to open a nine-point gap (1-20 to 0-14). Borris-Ileigh chased late goals, but to little avail.

John Ryan was dismissed on the hour mark for what appeared a wild pull on Ray McCormack, but Loughmore-Castleiney finished impressively when John McGrath buried a goal in the 62nd minute following a gritty burst up the field from Brian McGrath.