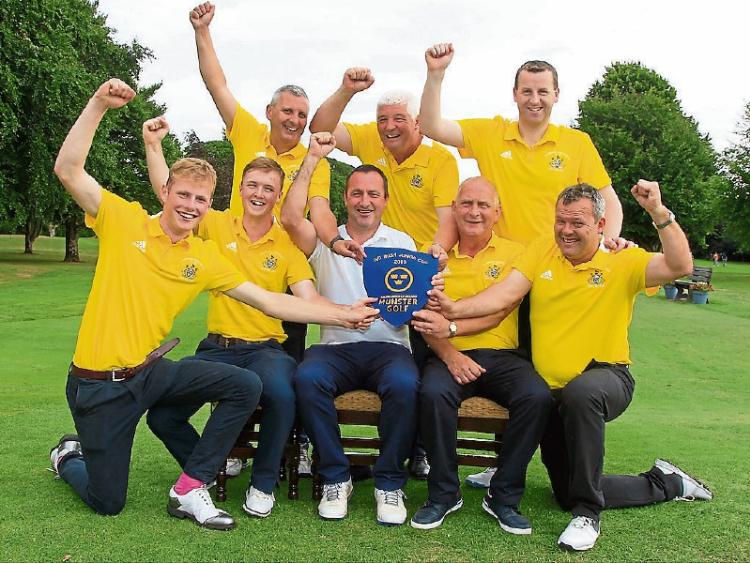 In 2012 one of the greatest comebacks in golf history was recorded at Medinah and labelled as ‘The Miricle of Medinah. 'On that famous Ryder Cup Sunday Europe turned the match on its head to snatch victory from the jaws of the Americans.

On Saturday last in Thurles Clonmel faced Ballybunion, regining Munster and All Ireland champions in the mens Munster Junior Cup Final having earlier in the day defeated Kinsale in the semi-final. However, as the players turned to go down the back nine at Turtulla few if any in the large crowd could see a Clonmel victory.

Two down in two games, level in one, and down by three in the other two games, it seemed as an early call off the course was likely – or indeed a miracle. Was it too much to dare to dream and to expect a turnaround of such magnitude over the second half in Thurles against such strong opponents.

Billy Hewitt who was three down after 13 gave some hope with a win on the 14th but despite some fine golf Billy just couldn’t get the break to reduce the margin and holes ran out. A putt from off the green for birdie on the 16th lipped the hole and agonisingly stayed above ground. A loss at 17 was the end of game one and advantage to Ballybunion.

Using his great experience and honing in on his renowned matchplay ability, Brian McLean had fought his way back from two down to lead and eventually close out his game on the 18th green.

With a win for each team it was now vital that one of the games well back produced something really special.

Young Darragh Lynch, a game winner against Ballybunion in the morning, was four down after 12 but had come storming back and was just one down on the 17th. A mix up saw the Ballybunion player pick his ball up before realising that Darragh hadn’t conceded the putt and now the game was all square. A half on the 18th might yet see it necessary to go down the 19th to produce a winner.

Meanwhile Jack Alton was one up going up 18. With Clonmel’s Denis Conway having at this stage lost his game 4&3 it was now a case of Clonmel having to win these two games, involving Alton and Lynch.

The pressure was heaped on young shoulders and none better to accept such pressure than Jack and Darragh. Darragh and his opponent both played the 19th (1st) excellently and left themselves similar birdie putts. Ballybunion putted first from 10 feet but their effort slipped by the hole on the right. Darragh was assured over his 8 foot downhill putt and as that disappeared under the green there were wild celebrations briefly.

All just realised that Jack still had to win his match but a live commentary by phone cued further celebrations both at the 18th and 1st as a one time unlikely win was celebrated and Clonmel claimed the crown.

They now go on to the All-Ireland finals where the four provincial winners will meet. Clonmel will be hoping they can now finally bridge that 40 year gap to their last Junior Cup win in 1978 when they were successful in Galway.

Also in Thurles on Saturday there was joy for another Clonmel Golf Club member of long standing, i.e. Gavin Smyth.

Gavin played a huge part in helping Dungarvan Golf Club to Munster Senior Cup success. In the morning the Ballyvaughan man beat his opponent Martin Poucher 3&2 in Dungarvan's 3.5 to 1.5 semi-final win over Monkstown. In the afternoon final Gavin halved his game with Fergal O'Sullivan as Dungarvan emerged 3-2 victors over Tralee.

Well done to Gavin and to Dungarvan Golf Club.