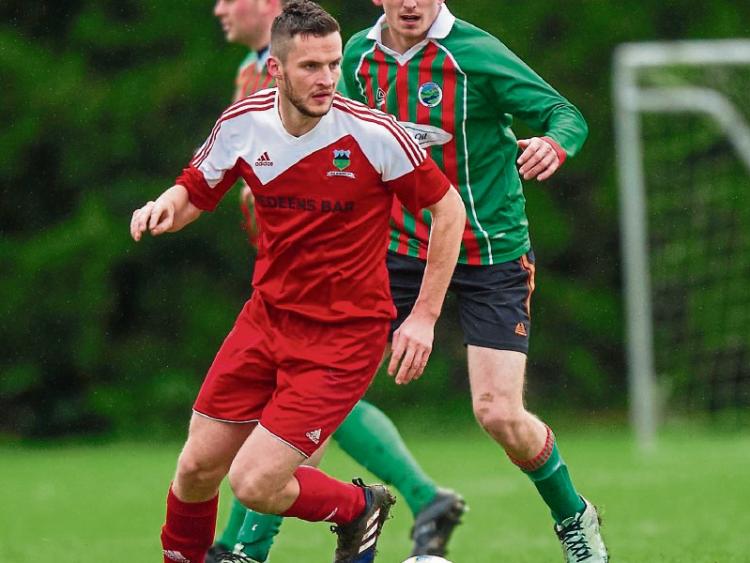 Alan Condon who scored Vee Rovers' third goal in their 3-1 win against Clonmel Celtic at the By-Pass in Clonmel on Saturday evening to give the newly-promoted Clogheen outfit a perfect start.

Although missing a few regular starters the home side will nonetheless be desperately disappointed with this defeat.

Celtic though nearly made the perfect start when after a fine run Peter O'Dowd saw his effort tipped on to the post by Vee Rovers custodian Tom Quirke within five minutes.

Paul Kennedy's was inches away from finding the net with a header from the resulting corner as Vee Rovers looked a bit stage struck on their return to the TSDL summit.

Unfortunately for the home side that was as good as it got in the first half and they fell behind on eleven minutes when Thomas Flynn was on hand to score from a rebound after Johnny Cagney had got down well to save Kieran Macken's shot.

It got worse for Celtic when the visitors doubled their lead ten minutes later after Kieran Macken stabbed home from close range when Celtic failed to clear a corner.

The two goal lead gave the newly promoted Clogheen side plenty of confidence and they saw out the first half in relative comfort. You would have expected a reaction from Celtic in the second half and we did get that as they started on the front foot with Ian Ryan and Peter O'Dowd both going close.

On the hour mark Celtic were back in the game when a brilliant Paul Kennedy pass freed Ian Ryan and he finished expertly to half the deficit.

However eight minutes later Vee restored their two goal lead when once again Celtic failed to deal with a set piece as Alan Condon powered a header home from a Shane McGrath free kick.

This knocked the stuffing out of the home side and they looked bereft of options on the bench with which they might change the game. In the end Rovers held on easily for a fantastic win to get their season off to a very bright start.