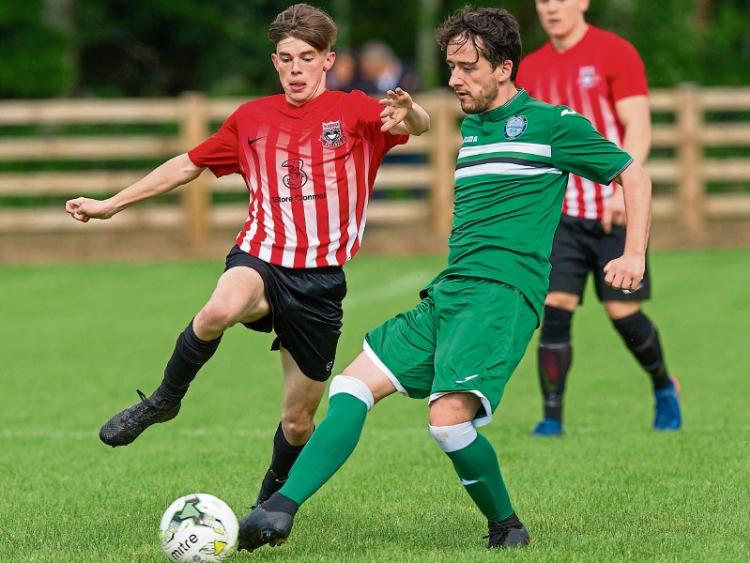 Jack Kennedy on left who scored for Old Bridge but it wasn't enough as they went down 2-1 away to Tipperary Town.

Peake Villa made it two from  two with a very convincing win over a Clonmel Celtic side that are struggling at the start of the season. The home side start at a ferocious pace and went ahead in the sixth minute when Pippy Carroll calmly slotted passed the visiting keeper after good build up play from James O'Sullivan. It was two minutes later when Matthew McKevitt scored after good interchange play in the visitors penalty area. And this Thurles side got their third goal in the 20th minute when a quick corner from James O'Sullivan ended with Evan McCormack getting his head on the end of the cross.

Celtic got one back four minutes from the break when Johnny Cagney scored from an excellent free kick which Villa's goalie Willie Tierney could do nothing about, but the home side re-established their three goal lead right on the break when Tommy Teer put Pippy Carroll through.

Villa came out for the second period and the tempo didn't drop one bit, going at the Clonmel side right from the off. They went 5-1 ahead in the 57th minute when Teer hit the Celtic post and McKevitt was on hand to tap it in. McKevitt secured his hat trick 13 minutes from the end when a Carroll cross was headed on by Kieran Hennessy before McKevitt headed home. And he assured himself of the man of the match award when he got his fourth and his side’s seventh in the final minute to cap an excellent performance.

The home side picked up their second win of the season in what turned out to be a well contested game against an Old Bridge side trying to put their heavy first day defeat behind them.

Bridge started well and had a penalty shout waved away in the 15th minute which would have probably given them a lead their good play deserved. At that point the home side were being reduced to long range efforts which were easily dealt with by the visiting keeper. Nearer to the end of the half both teams had some chances but the game eventually went to the break all square at nil all.

The second half followed in a similar pattern to the first with both sides looking like they had left their shooting boots at home, until Town opened the scoring through Vinnie Godfrey who pounced on a poor clearance at a corner kick.  This seemed to rock the visitors and they became a little ragged before conceding a second goal to an unstoppable drive by Kevin Browne.

Bridge then composed themselves and had their best spell of the game, with Jack Kennedy popping up to half the deficit. Try as they did however they were unable to get an equaliser and find themselves still looking for their first points.

Vee Rovers welcomed Premier League football back to Clogheen after a long time away and carried on their unbeaten start to the season when they scored a late late equaliser to deny Clonmel Town opening their own season with a win.

The game was a tough battle in windy conditions where the two sides found chances hard to come by in a very evenly contested first half. The game eventually went to the break without any goals and that continued to be the case throughout the second period. By this time the home side had the wind at their backs and were making the better chances, notably when Sean Flynn saw a shot cannon back off the visitors cross bar when it looked like it was going in.

Finally the deadlock was broken nine minutes from the end, but the goal came from the visitors when Keith Cashman was first to react to an uncleared corner kick and he fired home. Rovers fought back though and got the reward they deserved deep into injury time when Sean Flynn got onto a free kick to head to the net.

The current Premier League champions continued their winning start to the new season when they welcomed promoted Cahir Park to Cooke Park on Saturday evening.

The visitors set up quite defensively and held out in early exchanges with Willie Armshaw and David Slattery fashioning chances. Paul Breen then forced his former defensive colleague Aaron Wall into making a good save, before eventually the home side took the lead just before the half hour mark when Armshaw slammed home.

The same player almost doubled his side’s lead shortly after as the Saints took complete control of the game but eventually the Park held out without conceding again before the break.

They did concede however a minute into the second period when a Jimmy Carr corner kick deceived everyone waiting in the area and nestled in the net to the delight of the Tipperary  side. This could have sparked a serious dilemma for the visitors but to their credit they dug in and didn’t concede again for the rest of the game, having a couple of half chances themselves at goal without overly troubling the home keeper.