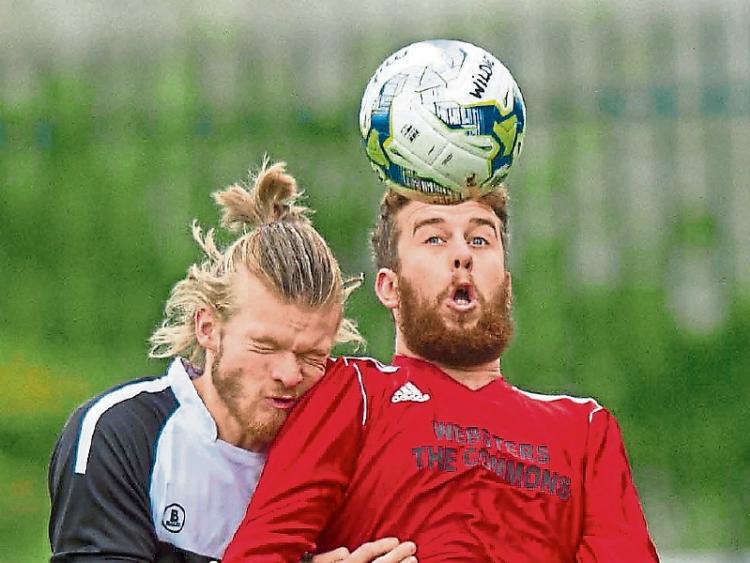 The two sides who were ‘relegated’ from the Premier Division last season faced off against each other at Newhill Park last Sunday. In what turned out to be an exciting game Two Mile Borris  came away with all three points, after their first win of the season.

The game started at a high pace but the deadlock was eventually broken when Martin Darmody hit a 35  yard screamer to the net, in the 10th minute.

After this the home side took control of the ball and give Glengoole very little chance to get back into the game before half-time.

The second half was a much closer affair with both teams having half chances score and Glengoole bringing a number of very good saves from the home keeper Kyle Shelley. As often happens however when one team is pressing to get back into a game they were caught on the break 15 minutes from the end when Dean Hayes Hayes beat three visiting defenders and eventually put the ball past the keeper to earn  his side a welcome three points

A strong Saints seconds side had an easy win here against a depleted Rosegreen outfit, on Sunday morning last. The home side’s strike force had the returning John Connery teaming up with Danny O'Brien and they were a handful all game with O'Brien scoring four goals.

Saints started well and went one up in the sixth minute when a David Kelly pass found Danny O'Brien who scored with a left foot shot. It was 2-0 ten minutes later when Connery crossed for O'Brien to score from close range, and a third arrived shortly after when Adam McGrath hit a tremendous shot that went in off the post. Connery finally got on the scoresheet himself just after the half hour mark when O'Brien selflessly passed inside to him for a tap in goal. And O’Brien then got his hat trick with a good effort to make it 5-0l, four minutes from the break.  It wasn’t the end of his scoring however and he got another right on the stroke of half time.

The hosts then went through the bench and looked like they had no intention of easing back on the throttle, adding a seventh goal five minutes into the second period, courtesy of a well-executed finish by Connery for his second of the day. But Rosegreen rallied and were only breached one more time seven minutes from the end when Jason Sutton also benefitted from a Connery assist to score a well taken effort.

The Commons played host to Cullen Lattin on Sunday, as both sides looked to register their first wins of the new season, after earlier defeats. Both teams started in a cagey manner as they tried to take the upper hand, but it was the hosts who took control and after 18 minutes  Ricky Cashin (see picture) headed home from a corner putting Slieveardagh in front.

The rest of the first half saw the hosts continue to dominate possession, and they extended their lead when Thomas Quin followed up a blocked down shot from Patrick Ivors and applied a cool finish shortly before half time.

Cullen came out after the break looking for a quick start, and got themselves a lifeline after four minutes when Russell Bowes drove into the box to finish past the home keeper.

This could have been the turning point for a comeback, but the two goal margin was restored only five minutes later, when Eoin Burke's mazy run and low shot beat the visiting keeper from close range. The away team had a couple of chances as the rest of the half wore on, before Eoin Burke curled in his second from the edge of the box and seal the win for the home team ten minutes from the end.

Both teams faced off in this game after winning their first games, and both would have wanted to put a marker down for the title race at the end of the season.

The home team had a couple of early corners which came to nothing, but Villa started to find their feet in the game and once they did, they started to create a lot of chances. Eoin Dwyer was causing Wilderness a lot of problems with his work rate and his dominance in the air led to chances for Adam Garrett and Kieran Hennessy who were unlucky not to score on a few occasions.

Villa had a number of corners in succession midway through the half, and some excellent deliveries from Darren McGuire had the visitors defence at sixes and sevens but somehow Villa failed to find the net with the home keeper pulling off some great saves.

In the 25th minute after another attack, Eoin Dwyer was on hand to set up Adam Garrett, who was not to be denied this time and slotted past the keeper to put the visitors a goal up.

In the second half the home team came more into the game and started to enjoy a little more possession but the Villa defence stood strong throughout the half. As the hosts began to push forward looking for an equaliser the game opened up and Villa had a couple of opportunities to add to the score but failed to take advantage.

Five minutes from the end the ball was cleared to substitute Andrew Halloran who with his first touch played a delightful through ball to Kieran Hennessy, leaving him one on one with keeper and he made no mistake.

This knocked the stuffing out of Wilderness and in the final minute after Kevin Croke broke up one of their attacks and powered out of defence releasing Eoin Dwyer to advance before very unselfishly passing to Kieran Hennessy to pass ball into an empty net to make it 3-0.