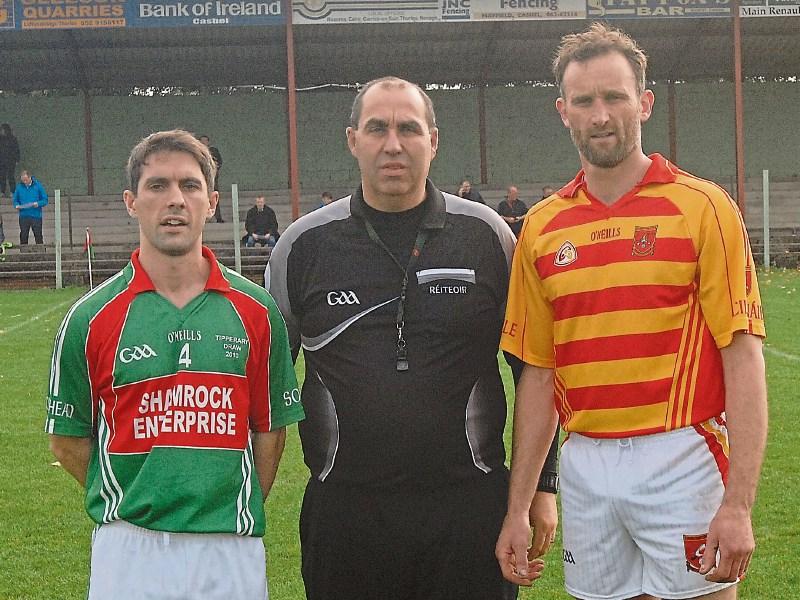 It’s been 22 years since Solohead last appeared in a county football decider at any adult grade, but at Leahy Park, Cashel, on Saturday afternoon, the West Tipp side made sure of a final spot with a convincing eight points win.

Killenaule, sprinkled with a half dozen players who have played at senior grade in recent seasons, were fancied to advance but Solohead ambushed them well with a slicker, pacier type of game that left the South champions well beaten long before the end.

While a physically stronger Killenaule were content to play through the middle throughout, Solohead at every opportunity counter-attacked at pace out wide and used the legs of their forwards to good effect. Their economy in possession and in scoring chances also stood out; when they had possession they spilled it less and passed it about better.

It also appeared that their long break since their West final triumph in Golden over Clonoulty Rossmore (0-13 to 0-4) helped, as Killenaule on the other hand had only a week to recover from their extra-time victory over Clerihan last Saturday. The freshness in the legs came into play as the game wore on.

Solohead started the quicker and had two points on the board inside two minutes from Michael Fitzgerald and Joss O’Brien. But slowly Killenaule wound themselves up with points from Declan Fanning and Eoin Butler, superbly finishing a flowing movement through the centre.

A Declan Fanning free edged ‘The Robins’ ahead in the 11th minute - the only time they would lead in this encounter.

The Solohead team and mentors prior to their County Semi-Final win over Killenaule at Leahy Park, Cashel, today.

The game’s first goal arrived in the 14th minute. Killenaule’s Kevin Prendergast was pick-pocketed by Paul Ryan as he attempted to set up an attack and Ryan then delicately delivered a 30 metre pass into Aaron Ryan for the full-forward to blast home for a 1-2 to 0-3 lead, an advantage they would never relinquish.

Eoin Butler then made a great run through the middle for a Killenaule point, matched immediately when Brendan Collins came from wing-back to point for Solohead.

Declan Fanning narrowed the game to the minimum with a free in the 17th minute before Solohead hit a purple patch of possession and scores to go well clear.

Good work from the influential Paul Ryan created an opportunity for his midfield partner James Dee to point in the 21st minute, and two minutes later Eoin Riordan kicked a beauty of a point from all of 40 metres after good work by counter-attacking corner-back Jerry Dee.

A three points lead was doubled in the 26th minute with a peach of a goal. A burst from a short free by Joss O’Brien linked up with Chris Kirby and his pass to Michael Fitzgerald was finished brilliantly to give the Solohead side a 2-5 to 0-5 lead.

A minute later it was seven-up for the West champions when Joss O’Brien scored a rousing point from 25 metres out.

Right on the stroke of half-time Killenaule got a break they badly needed. Niall O’Dwyer was impeded awkwardly inside the square and from the resultant penalty Declan Fanning drove high into the top right corner of the net. This last kick of the half sent ‘The Robins’ in just four points adrift and very much back in the hunt at 2-6 to 1-5.

Solohead introduced Declan Riordan at the break and they kicked on early with three points inside the opening three minutes - two frees converted by Joss O’Brien and Declan Riordan, followed by a point from full-forward Aaron Ryan.

Their third goal arrived in the 37th minute when while playing advantage for a free Michael Fitzgerald was taken out in the square and referee Pat O’Mahony pointed to the spot. Up stepped Joss O’Brien and his effort just squeezed under Tom Fitzgerald to give Solohead a 10-points lead that looked unassailable the way the game was going.

Over the next ten minutes Killenaule tried their utmost to rally and indeed had three unanswered points from two Declan Fanning frees and a well finished point by Eoin Shaw. But in truth the Solohead rearguard, to a man were magnificent in their determination and workrate, tackling, blocking and counter-attacking at every opportunity.

Ten minutes from time Michael Fitzgerald tagged on a point for Solohead after a move involving Declan Riordan and James Dee. And the game’s final score came in the 52nd minute when Joss O’Brien kicked a free from the tightest of angles, a free won by the pacey Aaron Ryan who was having a fine game up to then.

Thereafter it was a case of just playing out the clock for Solohead as they went in search of their first county final appearance since their 1996 County Junior ‘B’ final loss to Gortnahoe/Glengoole. However, two minutes from time two red cards were brandished by the referee. Killenaule’s Niall O’Dwyer was dismissed for wrestling an opponent to the ground, but in the follow up Solohead’s Aaron Ryan was red-carded for a low strike. It could be a very costly blow for the club and the individual with such a rare occasion coming.

For the men of Solohead, Monard, Limerick Junction and surrounds this was a great all-round team performance packed with passion and a determined workrate. The victory will send them into the final against Moyne/Templetuohy with great confidence of ending an eon since Solohead last captured a county crown - the Junior Hurling title of 1959 (won in October 1960). From 1 to 15 they all contributed well with the likes of Chris O’Connor, Brendan Collins, Noel Kennedy, Paul Ryan, Michael Fitzgerald and Joss O’Brien going the extra-mile.

It was a disappointing end for Killenaule but they will be the first to admit that Solohead had more in them on the day. Without making excuses the short turnaround didn’t help either but Killenaule are used to fixtures demands as a dual club. On the day Gearoid O’Rourke was a leader from centre-back as was Declan Fanning at centre-forward even if he missed a few scores that he would normally put over. Keith Kennedy, Michael Fitzgerald, Tommy Keaveney and Eoin Butler also had their moments.