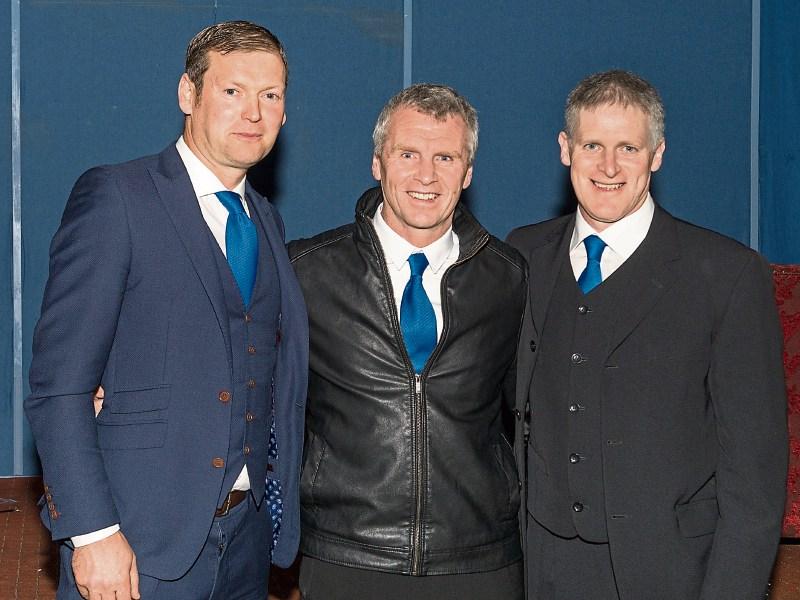 The half back line on the 1993 team - Michael Quinlan, team captain Willie O'Meara and Willie Morrissey.

It was a day of celebration and nostalgia for the county title winning Fethard football team of 1993 when they were honoured as the jubilee team at the county final in Semple Stadium on Sunday.

The Blues have been going through a lean period in recent years but that great day twenty five years ago was fondly remembered for the players as they recalled the win over Loughmore Castleiney.

The players were entertained at the Dome in Semple Stadium before the finals and then introduced to the crowd before the senior decider.

Then later that evening the celebration continued at the Brian Boru restaurant in Cashel where the players were feted before receiving a framed team photo taken earlier that day in Thurles.

The popular jubilee celebration was hosted by Tipperary County Board, The Nationalist and the Brian Boru. The Fethard team that won the County Senior Football title in 1993 pictured at Semple Stadium on Sunday where they were honoured as this year's Jubilee Team.

And there was an extra special element to Sunday night's celebrations when club legend Jimmy O'Shea was honoured in a This is Your Life style ceremony.

Players and their families rose as one to honour a man who has served the club with such distinction as a player, selector and official over six decades.

Fethard lead the Tipperary football roll of honour with twenty one titles and their wonderful record was lauded by all speakers – with everyone hoping to see them back at the top table again soon.

Football Board chairman Barry O'Brien said Tipperary needs clubs such as Fethard at its top table.

“You were going through a golden era for the club when you won the 1993 title and now you are experiencing leaner times. But I hope you can use today's celebrations to kickstart your return to the top because Tipperary football cannot do without you at the top”, Mr O'Brien said.

County Board chairman John Devane was also confident that Fethard would soon return to winning ways. The jubilee celebrations were always a hugely popular feature of the GAA calendar in Tipperary and he said the County Board was delighted to honour such a great team as Fethard and wished them all the best for the future.

Mr Devane paid tribute to the committee of John Costigan, Seamus King and Pat Carey that organised all the jubilee functions in football and hurling and said they were a huge part of the GAA in Tipperary.

Editor of The Nationalist, Michael Heverin, said the paper was delighted to be involved in the celebrations. The Nationalist had covered all the twenty one titles won by the club and looked forward to doing so again in the not to distant future. The Blues held a special place in the story of Tipperary football and the team they were honouring that night maintained the wonderful standard set by the club.

John Costigan of the organising committee also paid tribute to the standards set by Fethard and in particular by the 1993 team they were honouring this year. As the leader of the roll of honour, they held a very special place in the annals of Tipperary football.

Club chairman PJ Ahearne said the celebration was a wonderful recognition for the team and one they really appreciated. He said they are working hard to return the club to former glories and he was encouraged to see very promising young players coming through.

Team captain in 1993 Willie O'Meara said it was a privilege to captain such a great team and represented the greatest honour in his football career. He recalled that while teams today had such state of the art facilities, the Fethard team in 1993 trained in Dick Cummins field at the foot of Market Hill with a galvanised shed in the corner.

“But if you have the material to do it and the players who want to do it then it can be done”, he said.

He also recalled that the team had a number of injury concerns in the early rounds of the South championship, especially before they played old rivals Grangemockler.

“We had to bring on a lot of young players that day and they became men in that game”, he stated.